Ross Taylor: Wasn't Sure I Was Good Enough to Play Tests

Ross Taylor: Wasn't Sure I Was Good Enough to Play Tests

After becoming New Zealand's leading run-scorer in the longest format of the game, batsman Ross Taylor said that he was not sure that he was good enough to play the Test format.

After becoming New Zealand’s leading run-scorer in the longest format of the game, Ross Taylor said that he was not sure that he was good enough to play the Test format.

Adding further he revealed his goal was to play just one Test match for the country, and his mentor Martin Crowe had the vision of watching him become the leading run-scorer for New Zealand in Tests.

“My goal was to play one Test match. I guess it’s an emotional time because my mentor Martin Crowe – that was one of the goals he put down for me was to be New Zealand’s highest Test run-scorer. To be honest, I didn’t believe him, but I’d have loved for him to be here and help celebrate,” ESPN Cricinfo quoted Taylor as saying.

“When I first played for New Zealand I’d had a pretty decent one-day career and only scored three or four first-class hundreds. And T20 was just coming through. I always thought I was good enough to play one-day cricket but Test cricket was something I was never quite sure if I was good enough,” he added.

Taylor had become the leading run-scorer for Kiwis on the fourth day of the third Test against Australia at the Sydney Cricket Ground (SCG).

The batsman went past former skipper Stephen Fleming to achieve the feat.

Taylor was also pleased to complete the run-scoring milestone before his 100th Test, which is set to be the first match against India at Wellington in February.

“I go back to my 200th ODI game. I didn’t really enjoy it that much…needing one or two runs that might have been a twitchy game in the 100th. I just want to go out there and enjoy it and India are a fantastic country to play against,” Taylor said.

The 35-year-old also said that records are always meant to be broken and he is trying to set a target, that current batsman Kane Williamson can look forward to break.

“Records are meant to be broken and Flem set a very high standard, and for me, I am trying to get as many runs before I do retire to give Kane something to chase. He’s got a fantastic record and will go down as one of our greatest cricketers but we need him to have something to strive for,” Taylor said.

“Hopefully in however many years, there’s a youngster who can chase whatever, nine, ten, eleven thousand runs that Kane gets to,” he added.

New Zealand will next take on India in five T20Is, three ODIs and two Tests.

The first T20I will take place on January 24 at Eden Park, Auckland. 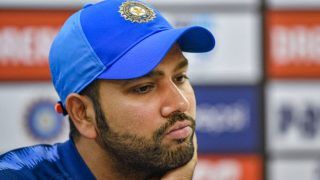 New Zealand Not The Easiest Place But I'm Ready For The Challenge: Rohit Sharma