One of the features that have been attractive among the cricketers is the fantastic facial hair.

The connection between cricket and glamour goes back a long way. The likes of Keith Miller, Denis Compton, Mansur Ali Khan Pataudi, Farokh Engineer, Imran Khan, and Brett Lee have been heartthrobs the world over. There have been a number of cricketers who not only grabbed attention with their game but also with good looks that made them known faces of the glamour world. If Miller was considered as Australia’s heart-throb, England had Compton. The prominence of the Englishman was slightly more because along with cricket he was an accomplished footballer. He played most of his matches for Arsenal and was the member of the 1950 side that had lifted the FA Cup. One of the features that have been attractive among the cricketers is the fantastic facial hair. READ: Top 5 contemporary all-rounder’s: Glenn Maxwell, James Faulkner, Ravindra Jadeja and others

When you talk about awesome facial hair the obvious names that come up are WG Grace, Merv Hughes, Dennis Lillee, and David Boon. Grace is remembered for a number of cricketing reasons, but he is perhaps also the most recognisable cricketer of all time due to his intimidating beard. Hughes and Boon have perhaps the most iconic moustaches in cricket. The trend of cricketers with facial hair seemed to diminish post the 1990s, but these days more and more cricketers from the recent generation have flaunted impressive beards well.

Hughes, who was famous for his bushy moustache and probing tongue, recently admitted that facial hair brings out the best in the players. “I feel facial hair brings the best out of the players. When I played, a lot of people had moustaches: David Boon and Graham Gooch both had lovely moustaches. They are just going out of the game. I firmly believe it should be brought back. I would like to see the guys with moustaches, beards, goatees, half-beards and half-shaved heads,” Hughes said. Let us then look at 10 cricketers with iconic facial hair.

We start the list — as we should — with the legend who played First-Class cricket for a record 44 seasons. He was a well- known face in Victorian England. Quite apart from his mind-numbing cricketing abilities, his beard and stare was enough to put anyone in thrall.

There are a very few people in the last generation who will remember Chappell without his moustache; it was a look the influenced a generation of Australian cricketers including the next man on this list.

Although the Western Australian cricketer had a full beard in his initial days, he later on gave way to a moustache that is still a trademark in the sport. When Mitchell Johnson sported that intimidating moustache during the Ashes 2013-14 Down Under, he was compared to Lillee.

Famously referred to by Steve Waugh as his “favourite animal” Merv Hughes is renowned for his sledging. The sight of a thickset glowering man swearing was enough to make any batsman lose confidence; add that impressive moustache to the mix and you have Hughes!

One of the world’s greatest all-rounders, Botham did not always have a beard. But when he did, it became a talking point. More importantly, he sported the look in the series that has since been referred to as ‘Botham’s Ashes’ — the 1981 Ashes.

Although he did not have facial hair as awing or terrorizing as the rest, Viv Richards’ French beard is instantly recognisable. It is a look he wears till date.

David Boon and Merv Hughes resembled each other both in looks and personality, with the exception being that Boon was not as chirpy. In terms of moustaches, Boon was as iconic.

The New Zealander is one of the most handsome cricketers recently, and when he sports the full beard women tend to go weak in the knees.

The Australian all-rounder is one of the few cricketers in the current generation who sports a beard quite often. He goes clean shaven sometimes as well, but there is no question about which look suits him better.

While Ravindra Jadeja and Bollywood star Ranveer Singh started sporting handlebar moustaches as well, it was Shikhar Dhawan who made the look iconic and is still the one who carries it best. Dhawan’s famous twirly moustache has earned him the nickname ‘Gabbar.’ 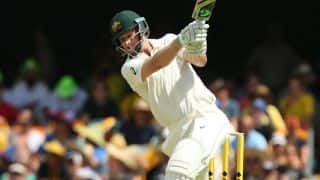