Over the years, Nehra has been a butt of several jokes and subject of trolls, but the fact remains that a fit he is an asset to any side he plays for.

Born on April 29, 1979, Ashish Nehra had the potential to spearhead the Indian attack in major part of previous decade. In a career spanning over 18 years, Nehra s career has been plagued with career threatening injuries. Over the years, he has been a butt of several jokes and subject of several internet trolls, but the fact remains that a fit Ashish Nehra is an asset to any side he plays for. Even at the twilight end of his career… Ok. Let us not say so.

He continues to impart knowledge in IPL as bowling coach of Royal Challengers Bangalore (RCB). He is one of the reasons behind’s Team India’s successful run in T20Is. Suvajit Mustafi lists out 10 interesting Nehra facts.

1. Best bowling figures by an Indian in World Cup

In what was truly one of the greatest bowling performances of all-times, Nehra bowled India to a victory against England in Durban in World Cup 2003. His bowling spell of 6 for 23, is etched in the annals of Indian cricket forever and is recalled with great joy. He bowled well throughout the World Cup, clocking 90 mph quite consistently, and was one of the reasons for India s success in that campaign.

Nehra made his debut for India in 1999 in the Asian Test Championship against Sri Lanka. Not many active cricketers, who have debuted in the previous century, still are active international cricketers. Nehra certainly is one. Virender Sehwag too made his first appearance in India colours in 1999, just a few days after Nehra s. Nehra is the second oldest international currently playing in this IPL.

Sehwag s recent Nehra-ji tweets have taken the social media space by storm. Sehwag and Nehra have been teammates for many years be it Delhi or India or in the IPL. In an interview with Indian Express in 2009, the duo spoke about each other. Sehwag said, There is a lot of talk about how Gauti (Gautam Gambhir) and I are good friends, but Nehra and I go back even farther. I still remember both of us going to play matches sitting on a scooter, one of us driving, the other holding the kit-bag on the back seat. He used to carry just a small bag, the bigger one was always mine. It s (the scooter) is very special to me, a token of our bonding. Nehra was quoted as saying, Viru toh yaaron ka yaar hai (Viru is a great friend).

On this 38th birthday, Sehwag referred to Nehra as the ‘Bheesma Pitamah of Indian cricket.’

4. Only Indian to take six wickets in ODIs twice

Six wickets do not come easy in One-Day cricket and if you thought Nehra s spell against England was just a one-off wonder, it was not. In 2005, against Sri Lanka in Colombo, Nehra took six wickets again, this time 6 for 59.

Later in 2016, Nehra starred in Sunrisers Hyderabad’s IPL triumph. He played 8 matches, claimed 9 wickets at 22.11 at an economy rate of 7.65 before getting injured.

Nehra is a huge hit on social media but the pacer is unaware of the fact. He once famously told the press.

You are asking this question to a wrong person because I am somebody who is not on social media. I am still using my old Nokia; so I am not on Facebook, Twitter and Instagram. I don t read newspapers. Maybe I belong to the old school of thought, Nehra told reporters during the India and Bangladesh ahead of their ICC World T20 clash.

Later Nehra told that he is learning WhatsApp.

Though Nehra is most remembered for his last over against South Africa in the World Cup 2011 in Nagpur, where Robin Peterson took the required 13 from the over, it s a wrong notion that the bowler has most often let the side down. He has been a butt of jokes since then but time and again, Nehra has proved to be a brilliant death bowler. In 2004, against Pakistan at Karachi, Nehra defended nine off the last over with an in-form Moin Khan and Naved-ul-Hasan at the crease. Pakistan were chasing 350.

Again in 2009, chasing a massive 414, Sri Lanka needed 11 from the last over with Angelo Mathews going strong. Nehra bowled a seven-run over (which was less than their innings run rate).

Even in the 2011 World Cup semi-final against Pakistan, Nehra ended up with the figures of 10-0-33-2 the best bowling figures by any Indian bowler in the contest.

Despite his brilliance, he was ignored by national selections. When asked about the snub, Nehra had famously said, “I don’t know what has happened. Whether it is my face, I don’t know. I’m happy that my wife likes my face.”

9. Involved in a pub brawl?

In 2010, during the World Twenty20 Championship, it was reported that Nehra and five other Indian cricketers were involved in a pub brawl. A section of fans told the players that it was disappointing to see them party after their poor on-field performances. Comments like these are believed to have instigated Nehra, and led to a scuffle. However, the players and Nehra denied any such incident.

10. When Nehra the batsman won it for India

Nehra is not known for his batting, in fact, early in his career, he struggled with the bat but once when it mattered, he hit the winning runs for India. The 2002-03 tour of India to New Zealand was disastrous for the hosts. They had lost both the Tests and then the first four ODIs. In the sixth ODI at Auckland, Indian were again nine down and Nehra, who was strike hit the winning runs. It came as a big surprise to all the Indian fans, but of course, a pleasant one. 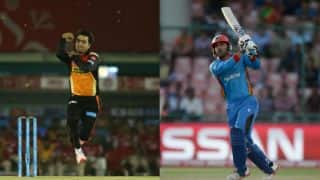 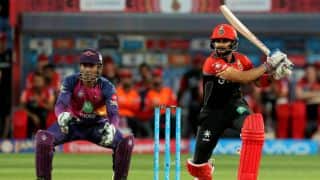