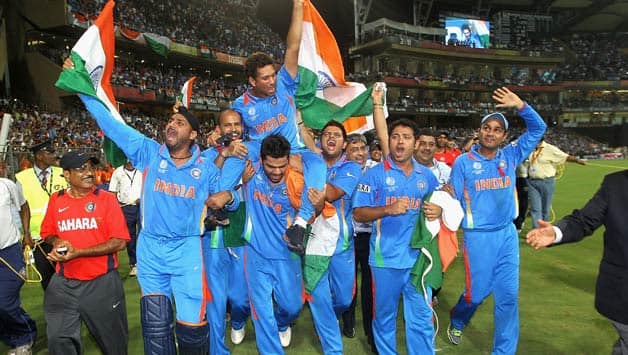 India’s messiah walks into sunset. Sachin Tendulkar’s One-Day International (ODI) career has been a glorious journey and to pick a few outstanding moments wasn’t easy. However, CricketCountry presents a list of instances that would remain etched in memory generations hence.

Here are 10 most memorable moments of Tendulkar’s ODI career (in particular order):

1. Winning the World Cup at the Wankhede & being chaired by his team-mates

A dream was finally achieved. A nation rejoiced, not because it tasted world glory, but because its favourite son finally lifted the World Cup. It was poetically set for him as the final was being played at his home ground — Wankhede. And it was the last time he would grace the biggest stage in all One-Day Internationals. He did brilliantly well throughout the tournament, but his dismissal in the final was almost anti-climactic. However, the Mahendra Singh Dhoni-led side was unfazed and put in a team effort to get the cup that mattered. Once victory was achieved, Tendulkar was carried around the ground as a gesture of immense love and respect. Virat Kohli summed it up when he said, “He has carried the burden of the nation for 21 years. It is time we carried him on our shoulders.” It was a moment that would have brought tears even to the most hard-hearted.

Tendulkar has always done well against Australia, but beating them in their own den remained on the Bucket List. During the 2008 Commonwealth Bank Tri-series in Australia, Tendulkar went through a rough patch. The pressure was on him considering the fact that his contemporaries Rahul Dravid and Sourav Ganguly didn’t feature in Dhoni’s young Indian side. With the critics pouncing on him, Tendulkar saved his best for last and produced gems in the finals to see it through for India. In the first final at Sydney, he scored a magnificent 117 not out in the run-chase. At Brisbane in the second final, he scored 91 to help India to a competitive total. The critics were silenced and the trophy was in the bag.

The consecutive hundreds at Sharjah signified what Tendulkar meant to the Indian team of the 1990s — all hopes rested on his shoulders. India met Australia in a crucial encounter of the tri-series, needing to overhaul a certain score during their run-chase to qualify for the finals. But, the champion that Tendulkar is, he came out with the intent of winning and not merely helping India qualify. He single-handedly took on the Australian attack in a display that left the opposition awestruck. Shane Warne bore the brunt of his fury and there was nothing he could do to stop. Meanwhile, Mother Nature had other plans as a sandstorm stopped the contest. But, Tendulkar’s eyes told a powerful story as TV cameras caught him — the protective gears still in place as one could see the fire burning in his eyes to get back in the middle and complete an unfinished job. Perhaps the weather gods saw that picture and changed tune. Once the game got under way, Tendulkar took charge and ensured qualification, although India didn’t chase down the total. The champion wasn’t done there as he smashed another ton in the final — on his 25th birthday — to help India clinch the trophy. The Aussies were left shell-shocked and could do nothing but get their jerseys autographed by him at the end of the game.

At the age of 36, Tendulkar continued to defy the age barrier and collected milestone after milestone. In a perfect exhibition of batting in an ODI against South Africa at Gwalior, Tendulkar helped himself to a double hundred and motored along the innings smoothly. The textbook of batting came to life as he executed all the shots to perfection. The bowlers had absolutely no chance of getting him out as he was in the zone to make it big. He smoothly moved past the three figure mark and the 150 — a point from where the double hundred looked gettable. There was an anti-climax though as Mahendra Singh Dhoni hogged the strike and joined the party in the slog overs. But, in the last over, history was achieved with a delicate touch to point. The helmet came off and the bat waved towards the skies. There were no exaggerated celebrations as there was a look of fulfilment on his face.

5. Scoring a hundred in the 1999 World Cup while mourning his father’s demise

Tendulkar had to return mid-way during the 1999 World Cup following the demise of his father. Even as he mourned his loss, India slipped to a defeat to Zimbabwe in England and needed to win all their remaining games to stay alive in the competition. An emotional Tendulkar returned because his country needed him and put behind his personal sorrow. On his return in the game against Kenya, Tendulkar bludgeoned 140 not out to help India to a comprehensive victory. It may have come against a weak team, but considering his turmoil, it was a knock of tremendous grit and character. On achieving his milestone he looked at the heavens to dedicate the effort to his father.

It was an encounter that had given Tendulkar several days of sleepless nights. India and Pakistan faced off after a gap of nearly three years as political differences kept them apart on the field of play. It was a game both neither side wanted to lose. Pakistan batted first and amassed 273 on the board at the back of Saeed Anwar’s century. In the face of the imposing total, Tendulkar looked a man possessed by the challenge that lay before him. He took the first ball — something he hadn’t done regularly. However, it was his assault on Shoaib Akhtar that is unforgettable. In the second over of the game, he smashed the speedster over point for a massive six and followed it up with two amazing boundaries. India dominated from there one and didn’t allow Pakistan a sniff. Tendulkar fell agonisingly short of what would have been a magnificent century, but the archrivals were conquered on the big stage.

7. Bowling the last over in the Hero Cup semi-final to win the game for India

When the frontline bowlers weren’t feeling confident of defending India’s total in the last over, Tendulkar put his hand up and decided to take matters in his own hands. India were defending only 195 and had done remarkable well to take it down to the last over. South Africa needed only six to win when Tendulkar volunteered to roll his arm over. The Boy Wonder bowled a dream over in front of a packed house at the Eden Gardens. The Proteas couldn’t come to terms with Tendulkar’s tricks and fell short by a mere two runs in a dramatic finale. A jubilant crowd celebrated and the then 20-year-old proved that he was more than a batsman.

Tendulkar became the first man to score over 10000 runs in ODIs during an encounter against Australia at Indore in 2001. To make the occasion even more special, he smashed his 28th ODI ton to help India beat Australia comprehensively.

It was a year-long, painstaking wait as Tendulkar battled and fought his way to the historic hundredth international hundred. With every game being built up as the possible special occasion, Tendulkar couldn’t overhaul the three-figure mark and some felt that it had become a psychological block. The historic moment did come — that too in the most anti-climactic fashion. In the Asia Cup in March this year, Tendulkar reached the milestone in a game against Bangladesh. It certainly wasn’t his best effort, but one that lifted a lot of burden off his shoulders. However, Bangladesh spoilt his party and went on to seal a memorable victory to take the sheen of Tendulkar’s achievement.

It was a World Cup that was dominated by Tendulkar as he lifted the Indian spirits after a dismal start to the tournament. He vowed to transform India’s run and he did in some style. As discussed earlier, the 98 against Pakistan was the highlight even as he scored heavily in the other games. However, in the final against Australia he faltered in the face of a huge total. Nevertheless, he was awarded the Man of the Tournament award for an amazing total of 673 runs in the tournament — which is still a record for any World Cup. The dream had to wait and it was ultimately fulfilled in 2011 at home.