Ten things one must know about India's only Goa-born cricketer.

“He showed us how to play fast bowling, and in doing so gave us the confidence we needed to beat the West Indies.” — Sunil Gavaskar, Sunny Days.

Gavaskar was the man who did it all, scoring 774 runs on debut (still a world record) with four hundreds. Gavaskar did not play in the first Test, where India were down to 75 for 5 before Dilip Narayan Sardesai settled ship with Eknath Solkar; they added 137, following which Sardesai went on to add 122 for the ninth wicket with EAS Prasanna.

Sardesai eventually fell for 212 as India reached 387. The Test was drawn, and Sardesai played a crucial role in the series, scoring 642 at 80.25 with 3 hundreds. Devraj Govindraj, also on the tour, admitted in an interview with CricketCountry: “Catches were dropped off him (Gavaskar) very early in most games. On the other hand, Sardesai played like a rock. He was magnificent. He was the one who gave the side a lot of confidence.”

They affectionately called him Sardee Maan in West Indies — a country that had seldom lacked grace when it came to acknowledge the champions. Here, then, is a list of little-known facts about the man.

Note: Dick Westcott (born in Lisbon, Portugal) and Moises Henriques (born in Funchal, Portugal) are the only other Test cricketers born on Portuguese territory.

Vinoo Mankad’s 184 at Lord’s in 1952 had remained the highest score on foreign soil for 19 years — till Sardesai scored his famous 212 (at Sabina Park) mentioned above; it was the first overseas double-hundred by an Indian. He scored 150 later that series at Kensington Oval, thereby becoming the first Indian to score two overseas 150s.

Despite his quiet demeanour Sardesai was outspoken by nature. When Vijay Merchant (who had stuck to a youth policy) had decided to leave him out of the 1971 tour to West Indies, 30-year old Sardesai retaliated by asking Merchant in front of everyone in the dressing-room to not come up with “useless explanations” if he did not want to select Sardesai. The rest, as they say, is history.

This one goes back to the same 1971 series. Sardesai was asked at the airport whether he had anything to declare. The response was prompt: “I have come here with runs and I’ll go back with more.” And he did.

Sardesai was a natural prankster. Gavaskar mentioned an incident in Sunny Days (once again, from the same tour) when Sardesai and Salim Durrani shared rooms. There was a call to the room when Sardesai was out. The voice had asked for Sardesai, mentioning that he was a fan and wanted to gift Sardesai a tape-recorder.

When asked, Durrani mentioned who he was, and the caller sounded excited, recalling Durrani’s dismissals of Garry Sobers and Clive Lloyd; he mentioned that there was a tape-recorder for Durrani as well, and called him to the foyer.

Durrani changed from his shorts to “respectable clothes”, could not find anyone, went back, and changed back into shorts when the phone rang again. The voice apologised and mentioned that he had gone to the swimming-pool to meet a friend; this time he said that he would wait with the two tape-recorders near the reception.

Durrani changed again, tie and all, smoothed his hair to get his princely look right, and once again found no one. It was then that he heard a voice: “So you want a tape-recorded, huh?” As the reader might have guessed by now, there emerged Sardesai from behind a pillar: of course there was no tape-recorder!

6) Certainly not a Rhodes

Sardesai was, to put in polite words, a rather ordinary fielder. He was out chasing leather on the 1967-68 tour of Australia; during one hard-hit stroke he realised that the batsmen had already completed the fourth run and had turned for a fifth by the time he ambled towards the ball.

He feigned a dive and pushed the ball to the boundary (a deliberate throw would have resulted in nine runs for Australia). Of course, the Indian dressing-room was in splits.

Milind Deora, the South Mumbai politician, had named a chowk (crossing) The Dilip Sardesai Chowk. It is located near Fariyas Hotel, and is very close to the Colaba Telephone Bhavan.

Sardesai’s axing remains one of the most confusing incidents of Indian cricket. Following the outstanding performance in West Indies Sardee Maan did not do too well at Lord’s and Old Trafford, but came back strongly in the historic Indian victory at The Oval: following England’s 355 India were reduced to 21 for 2 before Wadekar steadied ship with a crucial 54.

He did an encore when he walked out to bat at 37 for 2 as India chased 173 for a win; he was fourth out for 40, and India registered a four-wicket victory. He failed in the next Test at Kotla against the same opposition — and was never recalled despite the “Summer of 42” in 1974. He was only 32 when he played his last Test.

Sardesai was a part of the Bombay Ranji Trophy team during their golden era. In Ranji Trophy he scored 3,599 runs at 54.53, but his real achievement lay elsewhere: of the 61 Ranji Trophy matches Sardesai played for Bombay, they did not lose a single match.

Dilip’s cousin Sopandev Yeshwantrao Sardesai kept wickets for Rajputana (and Rajasthan) for 7 First-Class matches; Dilip’s son Rajdeep was an Oxford Blue also played 7 First-Class matches. He scored 63 not out (his only fifty) against Kent, whose attack was led by Derek Underwood, who had removed him in the first innings.

He was dismissed 7 more times; the bowlers included Eddie Hemmings, Allan Donald, and Abdul Qadir — so he cannot really be blamed for his average of 27.75. However, the most spectacular dismissal came against Cambridge University in his last First-Class match: he scored 40 in his last innings, but fell leg-before to the vicious leg-breaks of a certain Michael Atherton. 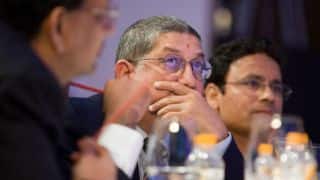