There are talks of Sourav Ganguly being appointed as the next Team India cricket coach. If that happens, fans will surely miss his frequent dadagiri in the commentary box. Suvajit Mustafi lists out 13 quotes in his post playing days that define the Indian as the master of ripostes.

Ganguly and Nasser Hussain were two highly intense captains and shared great on-field rivalry. Years after their retirement, the rivalry continues but in the form of commentary box jibes. Ganguly s love for football is well known he co-owns Indian Super League (ISL) club Atletico de Kolkata, which won the inaugural title. India s FIFA ranking may be a subject of joke, but Hussain should have known, be it on or off the field, you never try to pull former Indian captain s legs and when it is football, Dada does get touchy.

Here s what happened in the commentary box recently:

Nasser Hussain: When can I see India playing in a football World Cup?

Harsha Bhogle: It s better not to participate rather than getting knocked out in the first round.

Sourav Ganguly: If India had played World Cup football for 50 years, then they would have qualified one or two times for the finals unlike England!

Shahid Afridi was having a torrid time with the bat in the World Twenty20 championship in 2012. Ganguly doesn t minces with words as an analyst and unlike many other commentators, being diplomatic isn t his forte.

Analysing Afridi s reckless batting, Ganguly dissected in his characteristic manner, On flat pitch fair enough, you still play on the bounce and on the length, but when it s turning square, you have to be a bit more careful. It’s [batting] about calculations and about brains, and at the moment Afridi has left it back in Pakistan.

During India s tour of England in 2011, the visiting side struggled. But one Indian stood firm amidst the ruins Rahul Dravid. Sachin Tendulkar failed to get going again and Dravid rose to the occasion and scored another fine hundred. An excited David Lloyd and Ganguly were commentating and the latter beautifully summed up Dravid s contribution.

David Lloyd: The beauty of Indian batting is when someone like Tendulkar fails, someone else does it and this time it was Dravid.

Indians and Pakistanis never miss an opportunity to take digs at each other and neither does the former Indian captain.

Harsha Bhogle: Have you seen the new ‘Mauka, mauka’ ad?

Sourav Ganguly: Yes I have seen that ad. And this ad will remain the same for next 10 to 12 years because Pakistan will never beat India in the World Cup! Ganguly and Geoffrey Boycott have always had a cordial relationship with the Englishman conferring the Prince of Calcutta on his favourite player. During their commentary stint together, Boycott got a taste of his own medicine when he tried to needle the Prince.

Boycott: You must mention your experience about taking your jersey off and flying it in the air at the Mecca of Cricket: Lord s! Oh, you naughty boy!

Ganguly: One of your boys also took off his jersey here in Mumbai.

Boycott: Yeah, but Lord s is the Mecca of cricket.

Ganguly: Lord’s is your Mecca, and Wankhede is ours!

6: Sourav Ganguly on his popularity in Kolkata

Tendulkar played his penultimate Test in Kolkata and the entire city was captivated by the Master Blaster. Kolkata prepared itself to gift an ideal farewell to the country s one of the most beloved sons.

Looking at the Tendulkar mania around, Bhogle asked Ganguly:

Bhogle: Do you think Sachin will be more popular than you in that Kolkata Test match?

Ganguly: Yes, but only for those five days!

7: Sourav Ganguly on his autobiography

Tendulkar s autobiography Playing It My Way, did create some controversies and considering the colourful career of ups and downs that Sourav Ganguly has had, fans are desperately waiting for his autobiography. One of his fans asked him on his TV show, Dadagiri, when he plans to come out with his autobiography.

Ganguly replied, When I do [release my autobiography], it will create tremors, large ones, I m just waiting.

8: Sourav Ganguly on the WACA crowd

India and England were locked in a do-or-die battle at Perth in the tri-series in January 2015. Sourav Ganguly was with Bhogle and Sunil Gavaskar in the commentary box. The trio was discussing the low turnout crowd, when Ganguly delivered another gem.

Gavaskar: The attendance today is 7653.

Ganguly: We have that attendance in Durga Pooja!

The Ganguly-Chappell controversy is one of the ugliest ones and the fallout of once close friends is well-documented. Ganguly hasn t forgiven the former Indian coach yet and he does not hide that behind polite diplomacy. Even Tendulkar in his book criticised the Australian great and wrote about the harm he had done to Indian cricket. After the launch of Tendulkar s book, the Chappell subject was discussed by several sections of media and journalist Rajdeep Sardesai shot a direct question to Ganguly.

Rajdeep Sardesai: Does Greg Chappell owe an apology to Indian cricket? To Sachin Tendulkar, to Sourav Ganguly, to Dravid?

Rohit Sharma and the word talent are inseparable but during a pre-match analysis Ganguly made no qualms in admitting that Rohit is brilliant to look at when he is batting but emphasised more on delivery than talent. He summed it up in a way only he could.

Ganguly: You may look like Amitabh Bachchan, but you will have to act like him. That s what s important. Looks will take you nowhere.

Sourav Ganguly and Rahul Dravid have shared a camaraderie right since their junior days. During India s tour of England in 2014, there was a friendly banter and debate going on between Sourav Ganguly and Rahul Dravid, with Harsha Bhogle playing the mediator. The central topic was whether Dravid had under-bowled Ganguly in the 2007 tour of England. Ganguly knew his numbers and stood by his territory. Dravid in order to justify by his reasons made a remark on Ganguly s stamina

Rahul Dravid: Sanjay Manjekar made a really good point in the commentary box. If Ganguly had been a yard quicker and just a little bit fitter, he would have been a match-winner.

Sourav Ganguly: I wish I was Prime Minister of India. I could have done a whole lot of things.

Ganguly and MS Dhoni, have been two of India s finest captains but even after so many years it s pretty evident that the Bengal Tiger hasn t really understood many of Dhoni s field placements. During India s World Cup 2015 match against Zimbabwe at Auckland, Indian skipper MS Dhoni had placed a fielder right behind himself while Ravichandran Ashwin was bowling. To this Ganguly said, Once Dhoni retires, he should write a book on field placements.

Well, the internet is full of Ravi Shastri jokes and the netizens never miss an opportunity to troll the former Indian cricketer for his commentary clich s. Shastri has a habit of getting cocky, but if you try to do that with Ganguly, you better get ready to be owned.

During a commentary stint in a Test against New Zealand in 2012, Ganguly and Shastri were discussing about state associations naming stands in names of players. Ganguly, an immensely popular character in Kolkata still doesn t have a stand named after him, so Shastri decided to pull his leg.

Ravi Shastri: In Eden Gardens, Kolkata, is there a Ganguly pavilion or Ganguly stand? 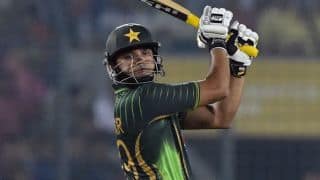 Azhar Ali dismissed by Shakib Al Hasan for 36; Pakistan 58/3 vs Bangladesh in 2nd ODI at Mirpur