Ravi Shastri was the poster-boy of Indian cricket in his youth.

Ravi Shastri is now the Director of Cricket for the Indian team on their ongoing tour of England. Shastri has been one of the most known figures in cricket. Sudatta Mukherjee finds 13 little-known things about the former Indian all-rounder.

Ravi Shastri has been a very familiar figure for cricket fans. Since retirement, he has been one of the most famous commentators on the circuit. Here are 13 relatively unknown facts about Shastri:

1. Few of this generation know that his full name is Ravishankar Shastri, which got pruned to Ravi somewhere along the way. For a while he was also known as “Shaz” after he teamed up with Wasim Akram for a TV show titled ‘The Shaz & Waz show.’

2. Shastri was still in college when he got a SOS from the Indian team in New Zealand. He arrived a day before the first Test at Wellington and took three wickets in each innings. His three second innings wickets came in four balls, all catches to Dilip Vengsarkar.

3. In his youth, the very tall and good-looking Ravi Shastri was the poster-boy of Indian cricket. His strikingly good looks made him a ladies’ man.  He had a much-publicised romance with Amrita Singh.  The Bollywood star had a strong cricketing connection, as earlier she was romantically involved with all-rounder Kirti Azad, before she went on to marry Tiger Pataudi’s son, Saif Ali Khan — a wedding that subsequently ended in a divorce. Incidentally, Azad and Shastri made their Test debuts  in the same Test at Wellington in 1981.

4. Shastri began his Test career at No 10 in the batting order. But in a span of less than two years, he rose to open the innings for India in Test cricket.

5. If you take a qualifying mark of minimum 10 innings opening the innings, Shastri’s average of 44.04 is ranked only below the great Sunil Gavaskar when he retired. Subsequently, only the dashing Virender Sehwag bettered Shastri’s effort as an opener.

6. A batsman is recognised by his performances away from home. Even in terms of hundreds Ravi Shastri had a fantastic record against the best attacks of those times on their own turf. Against Australia, England, Pakistan and the West Indies, he averaged 39.69 with seven centuries. It gets better when one considers the matches in which he opened the batting. That average goes up to 56.45 with four tons. As an opener, he average 60.00 in Australia, and that included the famous double-ton at Sydney.

7. Ravi Shastri had another notable sportsperson in the family — Mridula Shastri, who captained the Indian women team as a swimmer and water polo player.  They were cousins. Mridula, a medical doctor and a Rhodes scholar, died in the bombing of Pan Am 103 in 1988 over Lockerbie in Scotland.

8. Ravi Shastri recorded the second fastest double-ton in First-Class cricket during the famous knock against Baroda in the Ranji Trophy in 1985. It was during that innings that he smashed Tilak Raj for six sixes in an over to become the second man to do so in competitive cricket. Shastri had reached his ton in only 80 balls and then scored his next hundred in only 43 deliveries.

12. Ravi Shastri was named national goodwill ambassador for UNICEF. Sachin Tendulkar is the other cricketer who has the same honour.

13. In 2008, he was the celebrity torch bearer during the Olympic Torch Relay in Oman. 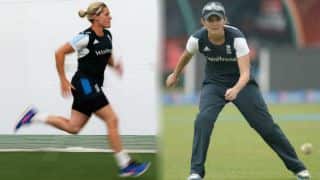