James Michael Anderson has carried the English bowling new-ball attack almost on his shoulders along with Stuart Broad since the retirement of quartet who had helped regain the Ashes in 2005; he went past Ian Botham s tally of 383 Test wickets, and became the first Englishman to reach the 400-wicket mark. Here is a list of 15 things about the man.

1. Namesakes: Among sportspeople with several distinguished namesakes, Anderson would rank very highly. The name James Anderson is shared by a tennis player from Australia, a golfer from Scotland, an American football player, a basketball player from USA, a Paralympic swimmer from Britain, and another cricketer who had played two First-Class matches for Oxford University in 1955.

Apart from that, there have been three actors (England, Scotland, and USA), a lyricist (English), three authors (one from England, two from USA), a painter (USA), a vocalist (USA), nine military officers at various levels, nine scientists in various streams, a Church of Scotland Minister (and Freemason), and many more who share the name James Anderson.

2. Ambidextrous: Not only is Anderson a constantly improving left-handed batsman, he is also a decent left-arm bowler, and fancies himself at left-arm spin. He bowled proper left-arm spin in his teens, bowls them in the nets, and had got Ian Bell with his left-arm spin in an exhibition match at Kingsmead. One of his wishes is to bowl left-arm spin at First-Class level.

To add to it, Anderson is quite annoyed with the fact that batsmen are allowed to play the switch hit without notice, but bowlers are not allowed to revert from right-arm over-the-wicket seam to left-arm round-the-wicket spin without informing the umpire.

4. In support of LGBT: Anderson had posed in the nude inside Attitude in September, 2010, and was the first cricketer to do so Britain s largest-selling magazine for the homosexual to ward off homophobia. He also sent out a simple message in an interview with BBC: If there are any gay cricketers they should feel confident enough to come out because I don’t think there is any homophobia in cricket.

5. Not taking eyes off: Anderson played a pivotal role in retaining the Ashes in 2010-11. In the first Test at The Gabba, he had an exchange with Shane Watson. At this point, Anderson recalled Michael Atherton s advice: the bowler has to return to his bowling mark under such circumstances, which meant that in one-upmanship, the batsman s won.

Anderson later wrote in Jimmy: My Story: Cookie (Cook), having latched on to what I was doing, later informed me it was the most pressured he had ever felt executing an underarm throw! He just had my right hand, arched like a claw, to aim at but thankfully I managed to see the ball coming out of the corner of my eye, and maintained my necessary degree of cool by refusing to turn my head.

6. The captain he never liked: Anderson had played 21 Tests under Michael Vaughan; he picked up 76 wickets at 34.46, which was certainly not excellent by his standards. Much later, in an interview with BBC in 2012, he expressed his opinion about Vaughan a captain who had not been criticised by many, especially the Englishmen.

Anderson said: Unfortunately, despite our cordiality now, I didn’t enjoy (Michael) Vaughan as a captain. A good captain should know how to talk to his team as individuals. I don’t think Vaughan ever had that in him a major reason I ve not held him in as high regard as others have. He was not as good a captain as others made out.

7. Grumpy: Though he is quite amicable character (as he claims in his autobiography), mostly with his family (and close friends, which include Cook and Graeme Swann) Anderson is not quite the same once he steps on to the ground. During the 2013 Ashes, Joe Root gifted him a package: on opening it he found a t-shirt with the word GRUMPY written on it.

8. Owling! Owling is a variation on planking in which a person squats “like an owl” in a populated and uncommon area. Participants commonly make noises similar to an owl, to make the owl impression more realistic. Wikipedia.

Before the 2,000th Test (at Lord s against India in 2011), Anderson, along with Stuart Broad and Steve Finn, resorted to Owling to relieve tension. While Broad and Finn chose more conventional locations, Anderson owled on the Lord s balcony, no less.

9. The sledger: When Michael Clarke was fined 20% of his match fee for using the words get ready for a broken f**king arm to Anderson (the sentence was picked up by the stump microphone) as the latter came out to bat, Anderson himself came to Clarke s defence, thus becoming one of the few cricketers to support sledging in public.

Sledging made me what I am, he told later in an interview with Chris Barrett of The Sydney Morning Herald. He had earlier told Robin Scott-Elliott of The Independent: I can t help sledging the Aussies.

10. Not quite the Casanova: While he is (as per my female colleagues) quite up-to-date with fashion he even designs t-shirts and is perhaps the most handsome English cricketer of late, he is not exactly the lady-killer. By his own admission: I’m cr*p at talking to girls. I really need them to come and chat to me, but I’m learning a lot from the England guys.

11. … and finally, a beard… There exists a Twitter handle on James Anderson’s beard. Beat that. Here is a sample tweet:

12. Most prolific fast bowler in Tests in this century: With 573 wickets in 85 Tests, Muttiah Muralitharan remains the most successful bowler this century. However, Anderson stands second on the list and tops the chart for pacemen since 2000. He is playing his 125th Test and has 480 wickets at over 28. Dale Steyn follows him. In fact, when we look at numbers across formats, even then Anderson tops the pacers list with 767 scalps!

13. Rivalry with Tendulkar: Sachin Tendulkar might be regarded as the greatest from his era but Anderson dismissed him 9 times in 14 Tests, the most by any bowler in the format.

14. First England bowler to take an ODI hat-trick: In 2003 Anderson became the first Englishman to take a hat-trick in the format. Anderson dismissed Abdul Razzak, Shoaib Akhtar and Mohammad Sami at The Oval to script a famous win.

15. Batting record: England do not expect a lot from Anderson’s bat. But… In the first Test against India at Nottingham in 2014, Anderson and Joe Root shared a 198-run record stand at Nottingham. This remains the world record for the highest 10th wicket partnership. Anderson scored 81 in that game. Not a bad achievement for England’s most successful bowler! 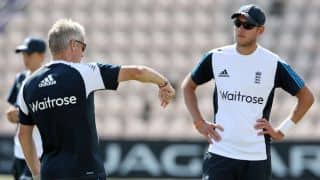 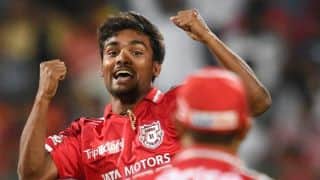 Sandeep Sharma to miss Champions League T20 due to injury