Dravid’s accomplishment away from the level of adulation it truthfully deserves.

A Dravid innings is contradicting in the larger context of human psychology. While it portrays the similarities between breathing and remaining alive, on the other hand it reiterates that real life and cricket are not synonymous. While one involves mundane chores, the other is an escape button from a remote-controlled time-table. His innings, more often than not, catches the viewers in the web and more than 15 years have passed by, but the Sudoku is yet to be solved. It is this dilemma in the minds of the judgment passers that keeps Dravid’s accomplishment away from the level of adulation it truthfully deserves. Not that Dravid has ever complained about it nor will he ever do but his batting journey reflects the society’s hypocritical nature.

Every time he takes guard in the centre, it is the beginning of a combat that everyone has a deep desire to engage in, but unable due to fragility of mind and limitations of physic. To the aspiration of many he is the perfect tragic hero who has the secret love of all, but – sadly – public admiration of a few. Every single moment of his 30,302 ball and 41,000 plus minutes graph has helped someone in some corner in the world connect deep within themselves and attain Nirvana, yet hardly a few own up to it for the convention is runs and not balls. Moreover, it is not appropriate to reveal one’s original identity in the open forum.

Dravid is not a star. He is a common man who goes about doing his job. And that is why on a day he scored his 36th hundred and became the calendar year’s highest Test run-scorer and fell a few runs short of registering his 13,000th Test run there was every possibility that people who do not turn the sports page in the following day’s newspaper might miss this story.

His horoscope reader must have predicted on January 11, 1973 that his little boy’s destiny is to connect with the desire of millions, yet live in the shadow of other luminaries. Else, Dravid would not have been playing cricket; he would have been somewhere else doing something else. 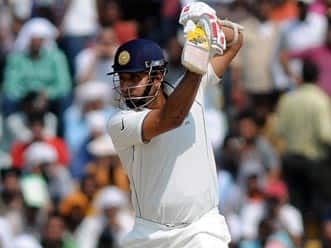