One of the curiosities of the match was that six-ball overs were used for the first innings and four-ball overs for the second.

Erudite scholars of cricket history have traced the first recorded cricket match in New Zealand to a game played at Nelson in March, 1844. Even before that, however, Charles Darwin, the famous naturalist, had spoken of a cricket game in progress near a mission station in North Auckland as far back as 1835. It seems that orders for cricket equipment were being sent to England from New Zealand in the 1830s, much before the formal establishment of Wellington in 1840. The first inter-provincial match in the north of New Zealand is reported to have been between Auckland and Wellington in 1860, Auckland winning by 4 wickets.

It is further reported that the first Inter-provincial cricket match in the South Island of New Zealand was played in 1864 as part of the extremely ambitious Dunedin Cricket Carnival project, arranged by one John Kissling. There were four teams in the fray: Otago, Southland, Canterbury, and George Parr’s All-England XI, the first from overseas to visit New Zealand.

It arrived from Australia on the City of Dunedin and berthed at the little Port Chalmers pier. The Canterbury and Southland teams also arrived by sea. After the festivities surrounding the arrival of the off-shore teams had given over, Canterbury and Otago began their long series of annual matches in January 1864, a long tradition that culminated in the game being incorporated in the newly organised Plunket Shield in 1911-12.

One name deserves special mention in connection with the Dunedin Cricket Carnival, mainly because the whole enterprise would not have been possible without his initiative and generosity. Gavin Bertram, in The Southland Times, speaks of one Dr Shadrach Jones, a fascinating and multi-faceted character.

Born in England in 1822, he qualified as a doctor at Scotland’s St Andrews University, then followed the trail of gold first to Bendigo, in Australia, and then to Dunedin in 1861. As the city burgeoned during the Otago Gold Rush, Jones prospered. He soon built the Provincial and Commercial hotels and the Theatre Royal and the Princess Theatre at Dunedin and channelled his copious energies into his business enterprises.

In 1863-64, with the England team touring Australia under Parr, Jones thought of enticing the visitors to add New Zealand to their itinerary. He paid the princely sum of £3,500 to cover the expenses of the touring England team and made arrangements for their stay and comforts at Dunedin.

Greg Ryan, in his book The Making of New Zealand Cricket 1832-1914, notes how Dunedin CC, founded 1862, supported this idea of Dr Jones and began the task of upgrading the facilities of their club ground, the Southern Recreation Ground (later Kensington Oval), adding a 600-yard long, seven feet high wooden paling fence and a 375-feet long grandstand.

On the completion of these additions, it was the considered opinion of the time that the ground afforded facilities at par with those in Melbourne. The stage was therefore set in grand style and there was a festive air about Dunedin on Wednesday, January 27, 1864.

The match between Otago and Canterbury at the South Dunedin Recreation Ground, started January 27, 1864. The record shows that the match was played with 4-ball overs, and thereby hangs a very strange interesting tale that we will come to later.

This particular match has great historical significance in that cricket statisticians have thought it fit to designate this particular game as the first ever First-Class match played in New Zealand.

The Otago Daily Times reported on January 27, 1864: “The first Inter-provincial Match in New Zealand will be commenced today, on the ground of the Dunedin Club, at the Recreation Ground. A capital game is expected; and it will be watched with much interest.

The visiting Canterbury team members, however, did not find the conditions to their liking, as reported in Men in White: The History of New Zealand Cricket: “The Cantabrians had practised on firm wickets at Hagley Park and were ill-prepared for the quagmire awaiting them after they had battled south by sea against gale-force winds. Although the Oval had been recently turfed as a gesture to the visiting Englishmen, recent rain and the fact that cattle had wandered over the ground the night before the match made for atrocious conditions.”

It was 1 shilling for general admission and 2 shillings sixpence for a grandstand seat. People started filing in and play commenced at noon in fine weather conditions. Canterbury skipper (and wicketkeeper) Henry Lance put the hosts in, not surprising, considering the state of the ground. The umpires for the match were Edward Harston and Kissling, who had played an important role in arranging the whole cricket carnival.

Although this was the very first First-Class match in New Zealand, not all 22 players were making their debuts in this game. Five members of Otago (selected by Dunedin CC) — John Jacomb, skipper James Redfearn, Richard Coulstock, Christopher Mace, and John Mace — had already had experience of First-Class cricket while playing for Victoria in Australia.

Otago were all out for 78 in the first innings, extras contributing 14 of these. James Fulton (grand-uncle of Test cricketer ‘two-metre’ Peter) remained not out on 25. For Canterbury, Robert Taylor picked up 6 for 21 and John Stevens 3 for 26.

The Canterbury first innings was indeed a sorry one; they were all out for 34 with no one in double figures. Extras contributed 4 runs, and the highest individual score was 7 by Henry Mytton. Both F MacDonald (4 for 14), and John Mace (4 for 16) bowled unchanged. The batsmen were apparently “being puzzled with the swift bowling”, according to Otago Daily Times.

Day One ended with the first innings of both sides completed. Day Two began with the local team launching their second innings, another feeble effort, despite their having in their ranks five players with First-Class experience. This time, the total read 74, extras contributing 12. Wicketkeeper John Hope (17) and skipper Redfearn (13) were the main scorers. This innings of 74 occupied the whole of the second day.

Day Three began with the visitors wanting 119 to win the game, a prospect that seemed highly unlikely, given what had already transpired in the three previous innings. Canterbury could only muster 42 on Day Three, the game ending at around 1 PM. For the hosts, MacDonald (6 for 17) and Mace (4 for 20) again bowled unchanged.

The hosts won the encounter by 76 runs, and this match saw the beginning of a healthy rivalry between the two sides that has persisted for over 150 years.

Now comes a really interesting and intriguing issue connected with this game, the strange tale that had been hinted at earlier.

In his seminal work on the history of cricket in New Zealand in the early years, entitled New Zealand Cricket, Volume 1, 1841-1914, published at Christchurch in 1927, Thomas Wilson Reese gives a fairly detailed account of this game, given its historical importance in the annals of New Zealand cricket. While mentioning the scores and the bowling performances, however, Reese thought it fit to record the number of deliveries bowled by each individual bowler, rather than the number of overs sent down.

This led to some confusion about the actual number of overs bowled in the match. The Association of Cricket Statisticians and Historians (ACS) of England stepped in with an addendum to the scorecard from their own sources, defining the number of overs actually bowled by individual bowlers.

Here is a comparison between the figures for the number of balls bowled as given by Reese and the overs assessment by ACS:

From an analysis of the above data, and sundry figures from other (unnamed) sources, the addenda note to the ACS source states that it is believed that 6-ball overs were used for the first innings and 4-ball overs for the second.

Well, the inaugural First-Class match in New Zealand certainly provided some elements quite out of the ordinary, and the conjecture about the number of balls bowled to the over is an issue that has probably not yet been laid to rest in a satisfactory manner, and the match remains a delicious enigma for students of the game. 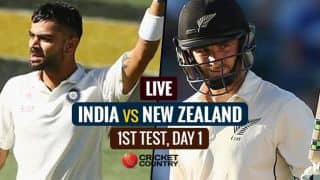