Single-wicket cricket is still played at smaller scales, but has mostly faded away from limelight.

Single-wicket cricket used to be a common phenomenon in the 1700s, with the likes of Robert Colchin, Stephen Dingate, Tom Faulkner, and Tom Waywark ruling proceedings. Big guns like Lumpy Stevens and John Small were, of course, the biggest draws. The concept faded away with time, but there was a revival in the early 1800s, when Fuller Pilch, Tom Marsden, Alfred Mynn, and Nicholas Felix rose to prominence. As cricket gained in popularity as a team game, single-wicket cricket once again disappeared. In 1963, however, there was an attempt to revive the format; on September 11 and 12 that year at Scarborough, a 16-man tournament was contested, sponsored by Carling Black Label Lager Beer. Abhishek Mukherjee looks back.

The concept of single-wicket cricket took off in an era when transport was not easy. It was much easier to get isolated cricketers than to acquire teams of 11. Hence, in the Hambledon era, single-wicket players rose into prominence. The contests usually attracted substantial viewership, and were played for lucrative prize money.

The first two decades of the 19th century witnessed a resurgence of the format. However, single-wicket cricket of this era also involved the best (worst?) standards in match-fixing. It was not uncommon for a star to throw matches.

Cricketers took the format seriously. A single-wicket match between John Grange and James Sadler lasted three days. Tom Hunt emerged as a major name, scoring 165 (the highest known score in single-wicket contests) against George Chatterton in 1843. In 1845 Hunt defeated a Knaresborough XI on his own.

Single-wicket cricket died out as logistics improved. Teams of eleven, based mostly on geographical divisions, came into prominence, but the real blow came when William Clarke s All-England XI arrived on the scenario. The greats of the era Pilch, Marsden, Mynn, and Felix were all superstars of both formats, standing the test of time.

In 1963, a call was made to revive single-wicket cricket.Sixteen players were chosen for the tournament, to be played on a knock-out basis at Scarborough. They even had a sponsor: Carling Black Label Lager Beer announced a prize of 250 for the winner and 100 more for the runners-up. There was also the Carling Trophy to be played for.

The fielders (nine at any point of time) were local club cricketers. Wicketkeeping duties were shared by Keith Andrew of Northamptonshire and John Murray of Middlesex. The innings ended once a batsman was out or had batted 10 overs. The bowler had to change ends after every over.

There was a significant addition to the rules, as Martin Chandler wrote on cricketweb: There was no non-striker so there was also a line halfway down the pitch which, for the batsman, was a point of no return. He could only be run out at the end to which he was running.

The eight pre-quarter-finals were scheduled for September 11. The 7 matches in the higher rounds were to be played the day after. Three international players Chandu Borde, Joe Solomon, and the uncapped Barbadian Tony White were included in the mix. The fixture was as follows:

The tournament started with a major upset when Bailey, probably England s finest all-rounder at that time, was dismissed for 6 in 2 overs. Leicestershire s Marner took a mere 2.3 overs to knock him out.

Allen was dismissed for 7 in 1.2 overs, but Borde could not get off the mark, lasting 1.1 overs. Then came another major upset: White slammed his way to 31 in 6.1 overs before dismissing Trueman for a 5-ball duck. White would later play two Tests for West Indies.

Close tried to hit out once Solomon reached 18 in 4.2 overs. He acquired 2 off the first ball. He tried a run off the second; Solomon s wide effort went for 4 overthrows. Close tried another run the following ball; this time Solomon did not miss.

What was Close thinking? Solomon had run out Alan Davidson and Ian Meckiff in the space of eight balls with direct hits from square-leg to seal the first tie in Test cricket: why would he miss two in two?

Palmer overhauled Cartwright s 17-ball 7 in 15 balls. Milburn biffed his way to 34 in 6.2 overs, but the unheralded van Geloven (still the last Leicestershire cricketer to do the 1,000 run-100 wicket double) batted patiently, taking 8.1 overs to reach the target.

Illingworth (14 in 4.1 overs) knocked out Knight (12 in 3.1) in a close contest. In the last match of the round, Derbyshire s Morgan fell for a golden duck; Gloucestershire s Mortimore required a solitary delivery to polish things off.

The tournament had lost Bailey, Borde, Trueman, Close, and Milburn by the time Day One s proceedings ended. It was merely 3 PM.

The second day s cricket began in the most dramatic fashion. Allen ran for a single first ball, and was aided by 4 overthrows. He was dismissed second ball. Three balls later Marner fell for duck. In the second match, Solomon fell for a golden duck; his countryman White hit a boundary off the first ball. The first two matches had lasted a mere 7 balls.

Palmer restored some sanity, scoring 28 in 6.3 overs. The calm van Geloven proceeded as before, reaching 22 in 9 overs. He ran a single off the first ball and hit a four off the second. Then, with 2 to score off the final 4, he played on. The 1-run defeat was the closest margin till this point.

In the fourth match, Mortimore raced to 16 before getting out off the 11th ball. Illingworth the only remaining star in the contest took 4.4 overs to reach the target.

The first semi-final saw White become the first player in the tournament to reach a half-century. He fell for a round 50 in 7.2 overs. Allen batted cautiously before falling for 36, scored off 8.5 overs.

Then came the match of the tournament, when Illingworth took on Palmer. Amidst a lot of tension, the Yorkshireman (11 in 3.5 overs) tied with the Somerset man (11 in 4). As per the rules, they played a 2-over tie-breaker.

This time Palmer batted first, finishing on 21 not out. Illingworth had a dig, but fell for 4 off the fourth ball.

By this time the crowd had swelled. White batted first but fell for a mere 7 when one of the club cricketers pulled off a spectacular catch off the 15th ball he faced. It took the unassuming Palmer he with a receding hairline a mere 2.4 overs to clinch the 250 prize money and the trophy.

Attempts of revival were also made in Australia in 1979, but by then day-night cricket had arrived. It is still played at smaller scales, but mostly away from limelight. 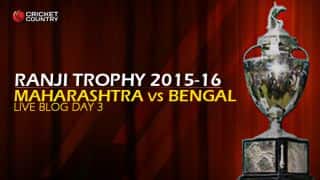