The day when two Sri Lankan batsmen had to be carried off to the hospital.

June 11, 1975. Sri Lanka put up a great fight against the mighty Australians before Jeff Thomson unleashed a fearsome spell of fast bowling. Arunabha Sengupta recalls the day when two Sri Lankan batsmen had to be carried off to the hospital.

After flogging an inexperienced Sri Lankan attack to pile up a huge total, the great tough Australian side hardly expected to be threatened by a bunch of diminutive batsmen.

The action had followed the expected script to a nicety. Rick McCosker and Alan Turner had put on 182 runs for the first wicket, Greg Chappell had stroked his way to a classy run-a-ball 50, Doug Walters had chipped in with 59. A score of 328 had looked enormous, for the day as well as when placed against the magnificent hostility of the Australian attack.

But then, the tiny islanders, still quite a few years away from Test status, had demonstrated the audacity to make the target look surprisingly achievable.

Wicketkeeper Ranjit Fernando had opened the innings and sparked off the chase belting four boundaries in his 18-ball 22. Bernard Warnapura had struck the ball well for 31.

At 84 for 2, opener Sunil Wettimuny had been joined by the immensely talented Duleep Mendis.

A jet airliner pilot, Wettimuny was a picture of courage while knocking the ball around, unperturbed by numerous blows to his body. And at the other end Mendis demonstrated a touch of class the world would come to recognise a few years down the line.

In the 32nd over, Sri Lanka stood at 150 for 2. The 179 more runs from 28 overs did not seem quite improbable. Dennis Lillee had been made to look less than threatening, Ashley Mallett earmarked for manhandling. The mighty Australians were peeved. Ian Chappell threw the ball to Jeff Thomson. The pride of a great cricketing nation was at stake.

The fearsome fast bowler sprinted in from the Pavilion End. The balls came out of his hand from his slingy action, almost from behind his back. The short statured men at the wicket were pummelled on the body. Thomson maintained later that the balls were not exactly bouncers. “They were only little fellas so you couldn’t call it a bouncer exactly.” The crowd did not think so. Boos rang around The Oval.

And Mendis was struck on the head. Alan Gibson of The Times described the ball as one aimed at the body. The Lankan stalwart fell as if shot by a searing bullet. He drifted between blip and consciousness. It is rumoured that he mumbled, “Oh my God, I’m going.” Tears had streamed down his eyes. Till today he denies saying the words, but one wonders if he remembers it all. What he does recall is that Thomson was topping 100 miles per hour, and that, according to Mendis, was just his average speed.

At the other end Wettimuny rubbed his battered ribs as he watched Mendis carried away. Captain Anura Tennekoon was the new man in, and stopped on his way to ask after his injured soldier.

Thomson was not done yet. With the third ball of his next over, he landed a crushing yorker on Wettimuny’s instep. The batsman hopped around, grimacing and yelping in pain. And the bowler grabbed the ball, threw down the stumps and appealed vociferously.

It did not endear him to the crowd. And neither did his mates support him. Thomson was sore. He later told teammate turned writer Ashley Mallett. “I had the ball in my hand and as the batsman hopped about, my team-mates were urging me to throw down the stumps and run him out. I threw down the stumps at the batsman’s end with Sunil miles out of his ground. I appealed and no other bastard among my team-mates joined in on the appeal. They all stood about with their arms folded. I was done cold.”

At the end of the over he went up to Wettimuny. There was no get-well-soon card on offer. Thomson snarled: “Look mate, it’s not broken yet. But if you face up to the next ball, it bloody well will be broken.”

The batsman had some lengthy on-field treatment, and soon was facing Thomson again. And the ball landed in the same spot, crashing into his in-step. Wettimuny went down in pain, and then hopped and hobbled half his way back to the pavilion. He had to be carried back the rest of the way. The metatarsals were a mangled mess.

The two men were rushed to the St Thomas Hospital. On the ground, Tennekoon and Michael Tissera added a brave 82, getting behind the line of the ball and dealing with the intimidation with plenty of skill and spunk. Sri Lanka went down fighting. The final score was 276 for 4, with two men rendered hors-de-combat.

The following morning at the hospital, Mendis was greeted by a London bobby. The policeman had not been at The Oval, but had heard a radio broadcast of two Sri Lankans assaulted by an Australian cricketer.

“Who did this to you?” the man of the law asked.

“Thomson,” answered Mendis, by then perhaps convinced that the name was known to all.

“Would you like to press charges?” asked the splendid man of the force.

Cut to 1996. The merry band of Sri Lankan cricketers under the generalship of Arjuna Ranatunga had just won the World Cup, defeating Australia in the final at Lahore.

The manager of the team was the same Duleep Mendis as the cricketers flew back to their homeland on the special Air Lanka flight. The pilot of the aircraft was none other than Sunil Wettimuny.

Man of the Match: Alan Turner. 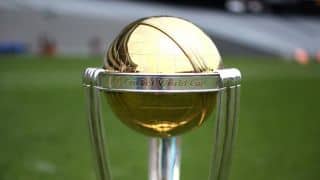