In an era where the stakes are high stakes, cricketing skills are not the only means to get at the opposition. These are times when the end justifies the means and sledging is one such method, seen in all its ‘glory’ in the just-concluded Ashes Test Down Under. In the second and concluding part, Nishad Pai Vaidya lists some infamous sledges.

In an era where the stakes are high stakes, cricketing skills are not the only means to get at the opposition. These are times when the end justifies the means and sledging is one such method, seen in all its ‘glory’ in the just-concluded Ashes Test Down Under. In the second and concluding part, Nishad Pai Vaidya lists some infamous sledges.

When a 16-year-old Sachin Tendulkar took on the might of the Pakistani pace attack on his first international tour, the world watched in awe. The baby-faced teenager showed he was made of stern stuff when he got up to score a half-century after being hit on the nose by Waqar Younis. But, when the wily Abdul Qadir challenged him during a one-day exhibition game at Peshawar, the world watched in awe the first signs of a genius in the making. In a 20-over exhibition game, India were chasing. Tendulkar smashed Mushtaq Ahmed for a few sixes when Qadir came and told the teenage prodigy, “Bacchon ko kyun maar rahe ho? Hamme maar ke dikhao.” (Hindi for: Why are you smashing a kid? Hit me if you can). What followed was sheer carnage as Tendulkar smashed the veteran for four sixes in an over. Tendulkar went on to score a fifty, but India fell agonisingly short of the target.

Daryll Cullinan was Shane Warne’s bunny as the leg-spinner dominated the South African right-hander through the 1990s. When they faced off after a long interval, Warne made it clear to him that he was waiting all the while to get him.

Cullinan replied by saying, “Looks you spent [the wait] eating.”

It is said that Warne tormented Cullinan so much that he consulted a psychologist to get over the mental blocks. And, when he did face Warne the next time, the cheeky leg-spinner greeted him by asking him the ‘colour of the couch.’

Merv Hughes always had a nasty glare or a few words to share with the batsmen and he did not even spare Viv Richards during a Test match. Hughes glared at the West Indian legend and Richards replied by saying, “This is my culture, these are my people, don’t be staring at me like that.”

However, Richards was dismissed by Hughes and the fast-bowler said, “Mate. In our culture, we just tell you to f*** off.” One of the rare occasions a bowler got the better of sledging Richards.

There was no stopping Merv Hughes on the field of play. When he ran into the English batsman Robin Smith during the Ashes 1989, he told him, “You can’t f****** bat.”

Shastri was on his way to a memorable double century at the Sydney Cricket Ground (SCG) and was in total control of proceedings. Mike Whitney was Australia’s 12th man for the game and was about to throw at Shastri’s end when he realised that the batsman would be home safely.

Clayton Murzello writes in his book Caught and Told that Whitney told Shastri, “Next time, I’ll blow your f****** head off.” To which, Shastri retorted by saying, “If your bowling was as good as your throwing, you wouldn’t be Australia’s 12th man.”

The Australian fielders too couldn’t help but laugh.

The Sri Lankan skipper Arjuna Ranatunga never hesitated to get under the skin of the Aussies. And whenever, he was in the centre, the Aussies wanted to have a go at him and unsettle him.

On one occasion Ranatunga, not the fittest of cricketers, called for a runner. Ian Healy, the Australian wicket-keeper, immediately said, “You don’t get a runner for being fat.”

Zimbabwean fast-bowler Eddo Brandes was a unique character. He was a chicken farmer who bowled fast in the big league. When he faced Glenn McGrath in a game, the Australian seamer asked him, “Why are you so fat?”

Brandes retorted, “Because every time I sleep with your wife she gives me a biscuit.”

Kieron Pollard loves life on a fast-track. So, when the Pakistan openers crawled to 11 in a little over six overs in a One-Day International, he told Ahmed Shehzad, “I have never played a Test match. I guess this is my first because I am seeing a Test innings.”

In 2005, England celebrated the return of the Urn after 18 years. It was a triumph over a world- beating Australian side and each member of the England setup were honoured with an MBE. Paul Collingwood only played the final Test at The Oval and could only score seven. But, by the time they faced Australia next, he had established himself in their line-up. As Collingwood was the batsman who frustrated Australia in 2006-07, Warne decided to have a go, “You have an MBE right? For scoring seven at The Oval? That is embarrassing.”

An upbeat England side arrived in Australia in 2010-11 to regain the urn Down Under. The Australians were on the wane and were put under serious pressure by the tourists. During one of the games, Mitchell Johnson (the non-striking batsman) told James Anderson (who was waiting on his mark to deliver the ball), “Why are you chirping now mate? Not getting any wickets.” Anderson ran in and bowled the batsman at the other end. He turned back to stare at Johnson. Enough said! 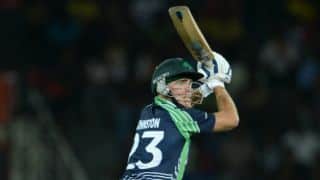