20 instances of streaker invasions in cricket (Part I)

20 instances of streaker invasions in cricket (Part I)

In cricket, the incidents of streaking have been reported on number of occasions, where the invaders have caused much embarrassment for the organisers, cricketers and often the viewers too.

Streaking, as its Wikipedia page defines it, is the act of running naked through a public place as a prank, dare or an act of protest. In the world of sports, a streaking incident usually happens during a match where the streaker invades the field quickly and either leaves on his/her own or gets chased and caught by the police/security officials. In cricket too the incidents of streaking have been reported on number of occasions, where the invaders have caused much embarrassment for the organisers, cricketers and often the viewers too. Chinmay Jawalekar has penned down the list of 20 such incidents from the cricketing history in two parts. Part II

1. The freaker (England vs Australia, Lord s, 1975): When the England and Australia 1975 Test at Lord s was crawling towards a draw, a freaker as he was then called, Michael Angelow invaded the cricket pitch and leaped over the stumps. The streaker, who gained celebrity status, became the first invader to interrupt a game of cricket.

2. Roy s bunny (India vs Australia, Brisbane, 2008): While the India-Australia ODI from the 2008 CB series was underway, a streaker entered the playing field during Australia s innings. With the security guys chasing him, the naked guy ran into Andrew Symonds and fell a long way away after bumping into him. The collision was serious and though it did not cause any harm to burly Symmo, who did it on purpose to nail the streaker, the poor fellow could not understand what happened to him. Before he could regain senses, the security officials got hold of him and took him away. Indian players had a nice laugh about the incident.

3. Chappell s victim (Australia vs New Zealand, Auckland, 1977): 1970s earned a bad reputation with a number of streaking incidents happening in cricket; so much so that the golden era of streaking infuriated the then Australian skipper Greg Chappell to an extent where he had to make a public statement that he would deal severely with the pitch invaders. So when the third streaker ran on to the pitch during the second Test between Australia and New Zealand at Eden Park, Chappell chased him, grabbed him and spanked his backside with the bat. The man, identified as Leonard Bruce McCauley, sued Chappell unsuccessfully for the assault. He was also fined NZ$ 25 for disorderly conduct.

The streaker, however had done enough to disrupt Chappell’s concentration as the latter got run out soon. McCauley later earned the name, ‘beaten streaker’.

4. Chappell part II, (Australia vs West Indies, Melbourne, 1979): Chappell was involved in another streaker incident and this time in 1979. This time the former Indian cricket coach played the role of a hero, unlike the previous incident where he ended up beating the streaker. During an ODI against West Indies at the iconic MCG, when an unknown naked person invaded the field, Chappell covered the vitals of streaker s body with his bat before the security officials came and took him away.

5. The frolicker, (Australia vs New Zealand, Christchurch, 2016): On Day 2 of the Trans-Tasman Test between New Zealand and Australia in Christchurch earlier this year, a naked man had hell of a time enjoying his few seconds of fame. He leaped over the security barricade and ran around the ground with as many as six security guards chasing him. After several attempts, he was finally caught, head locked and escorted out of the ground.

6. World Cup hero (England vs Scotland, Christchurch, 2015): Seems like New Zealand is a streaker’s paradise! During the England-Scotland World Cup 2015 game at Christchurch, the players of both the teams were in for a shock when a streaker made it to the ground and had a good run. The middle aged man entered during Scotland s innings after fall of a wicket and celebrated the English success in his own way. Play was stopped for sometime as the security personnel chased the naked man and got him off the field.

7. Female streaker (England vs Pakistan, Lord’s, 1996): During the first Test between Pakistan and England at Lord s in 1996, a female streaker made it to the ground and ran around it for a while before she could be caught and escorted out of the park. This perhaps was first incident of female streaking in a cricket match.

8. Shocker for Punter (Australia vs Pakistan, Sydney, 2005): During day 3 of third Test between Australia and Pakistan at Sydney, the Australian captain Ricky Ponting was in for a shocker when a male streaker invaded the pitch while he was batting. An embarrassed Ponting looked on and waited for the guy to be thrown out of the ground.

9. GoVeg.com (England vs Australia, The Oval, 2005): During the fifth Test of the Ashes 2005 played at The Oval in London, a female streaker interrupted the match when she rushed on to the ground naked. It seems the female protestor was a proponent of quitting non vegetarian food as her buttocks read GoVeg.com).

10. Taylor in a spot of bother (Pakistan vs New Zealand, Wellington, 2009): During the second Pakistan-New Zealand Test from the 2009 series at Wellington, a female streaker ran towards the pitch and specifically towards Ross Taylor, whose attention she wanted to grab. A visibly embarrassed Taylor avoided any eye contact with the lady who was soon caught by the guards and taken off the field. Brushing aside the incident, Taylor top scored with 97 but could not avert a New Zealand loss. 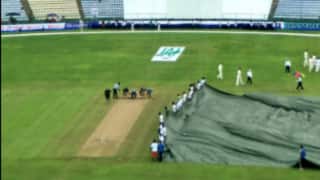 Sri Lanka 6-1, trail Australia by 80 runs as Day 2 of 1st Test ends early due to rain in Pallekele