Edgbaston is a tough ground for teams batting last as scores in the fourth innings depict over the years. India have their task cut out in the last innings even though they have managed to dismiss England out for a low score of 180 in their second innings. India now need 194 to win in the last innings. That is not going to be easy going by the history of scores achieved in the last innings at Edgbaston.

There have been only nine occasions when totals above 100 have been successfully chased down by the team batting last. Moreover when chasing totals of 150 or more, only thrice have teams batting last managed to accomplish this feat on this ground. South Africa chased a stiff target of 281 ten years back against England on this ground when they made 283 for the loss of five wickets to win the Test. England made 211/3 to win the Test against New Zealand in 1999. This is the sixth highest fourth innings total achieved at Edgbaston and only the second time that a team won chasing more than 200 here.

In fact, out of the eight times that teams batting last have mustered up more than 200 runs in the final innings, they have lost six times as opposed to winning only twice. The third-highest score in the fourth innings to win a Test at Edgbaston is 157/3 made by Viv Richards led West Indies in 1991.

The highest total made by India in the fourth innings at Edgbaston is 277 which they made in the third Test of the 1967 tour of England. Ajit Wadekar hit 70 but India still lost by 132 runs as they were chasing a stiff target of 410 runs.

India made 174/5 in 78 overs in their final innings in the 1986 Birmingham Test. They were chasing a total of 236 in the fourth innings. They had already won the series 2-0 and hence there was not much urgency in pushing for the target. At one stage though, they were 105-5 with close to one and a half sessions to go. But then Mohammad Azharuddin and Kiran More stood firm and added 69* and the match ended in a draw.

Incidentally, if India manage to win this Test, this would also be their highest chase in England eclipsing their famous win in the Summer of ’71 when India made 174/6 at The Oval to beat England for the first time in their territory.

Let’s see what happens this time around at Edgbaston. 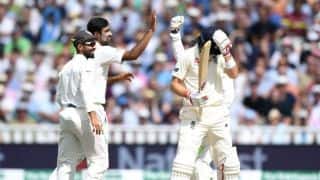 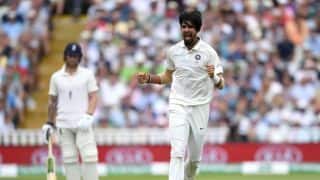