The year 2012 has been an eventful for Test cricket, despite growing concerns about T20 making deep inroad into the classical format. 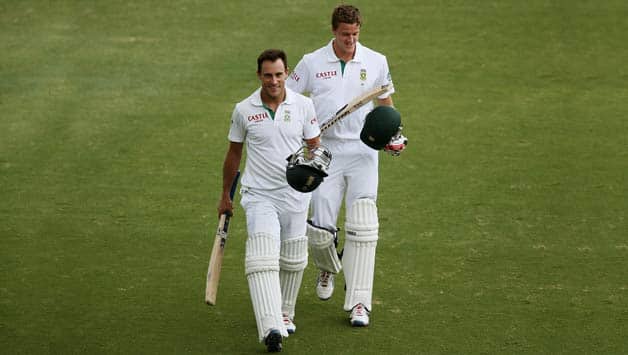 The year 2012 has been an eventful for Test cricket, despite growing concerns about T20 making deep inroad into the classical format. There have been a few out-and-out victories – those that went till the final session of the final day and then one that helped a side scale the summit of the ICC Test rankings. Of course, there were a few heartbreaks along the way as well.

It took four days and an all-round performance from the Australian side to hand India its first Test defeat of the year. India’s side continued Down Under following their abysmal tour of England. India were bundled out for 191 on Day One. Michael Clarke and Ricky Ponting took centrestage and made it Australia’s game. Clarke’s purple patch began in this very innings where he went on to post a mammoth 329 while Ponting walked right back into form with a well made century. What made Clarke’s knock truly special was that he declared the Australian innings on Day Three, even as he had a number of personal landmarks on the horizon. India showed fought back in the second essay with Sachin Tendulkar, Rahul Dravid and VVS Laxman leading the way to post a total of 400, but it was too little too late.

It was the third and final Test of the series between the two sides at Lord’s and the teams fighting for the No 1 spot in the Test rankings. South Africa was leading 1-0 after two Tests and needed a win while a draw could’ve kept England on top. It was a riveting contest from day one as the Proteas were eventually bowled out for 309 in the first innings after being in a precarious position at one stage. England too had a shaky start, but managed to surpass the South African total by only six runs. Hashim Amla rose to the occasion yet again and smashed a century to take South Africa to 351 – which meant England needed 345 to defend its crown. The England batsmen and the South African bowlers fought tooth and nail as there was something big at stake. Vernon Philander produced another gem of a spell to restrict England and seal a historic moment for South Africa.

In the aftermath of the Saeed Ajmal show in the first Test, the Misbah-ul-Haq-led Pakistan team showed signs of complacency in the second. Winning the toss and electing to bat first, the Pakistan lost wickets at regular intervals and eventually finished on 257. In reply, England managed to gain a lead of 50 runs, thanks to a 139-run stand between Alastair Cook (94) and Jonathan Trott (74) while Stuart Broad also threw his bat around for a 62-ball 58. The cracks in the Abu Dhabi pitch gradually began to open up on day three and turned into a minefield as play progressed to day four. Monty Panesar gave England hopes of leveling the series as he picked up six wickets in the second innings, to bowl Pakistan out for 214. With more than five sessions to play, England batsmen would’ve backed themselves to chase down the paltry target of 164. But to their horror, Abdur Rehman spell of six for 25 bowled England out for 72 and gave Pakistan the series.

South Africa dominated a major part of this game only to see a Kiwi fightback thwart defeat. Put in to bat, South Africa managed to post 474 with centuries from Alviro Peterson and JP Duminy. In reply, the home side avoided follow-on by only one run – giving South Africa a lead of 199 runs. The South African batsmen went all out in attack and declared their charge on 189 – to give their bowlers enough time to defend 389 on the final day. New Zealand had a nightmarish start to their second innings as they lost five wickets for only 83 runs. But, young Kane Williamson played with great determination to score a century under such difficult circumstances and was ably supported by Kruger Van Wyk. The duo added 80 runs for the sixth wicket to ensure a draw even as Morne Morkel bowled a fantastic spell.

Australia came close to losing to the West Indies at Kensington Oval, Barbados. The hosts batted first and declared their first innings at 449 for nine – with Shivnarine Chanderpaul leading the way with a patient century. Australia stuttered and were troubled, but a rearguard action by the tail saw them rise. Clarke made a sporting declaration on day four with the Aussies 43 runs shy off the West Indian total. The Australian bowlers then turned on the heat skittled out the hosts for 148. With two sessions to go, Australia needed 191 for a comfortable victory, but Narsingh Deonarine had other ideas. He kept the Windies in the game by picking up the crucial wickets of Ed Cowan, Shane Watson, Ricky Ponting and Michael Clarke as the Australian batting began to fall apart. They were reduced to 140 for five – still needing 51 runs for victory. Michael Hussey (32) and Matthew Wade (18) rescued them with a partnership of 37 to take Australia closer to victory. When Hussey fell, Australia were just two short, but got there eventually.

It was a game in which Matthew Wade announced his arrival in Test cricket. With Australia stuttering in the first innings, he produced a gem of a hundred to take Australia to 328. West Indies couldn’t challenge that total and were packed off for 218. In the second innings, Australia scored 259 – setting a steep target of 370 for the home side. West Indies had five sessions to try and push for a win but fell short of the target by 75 runs – with Clarke recording his second five-wicket haul in Tests. West Indies looked threatening in their run-chase, but couldn’t keep it going.

Captain Ross Taylor inspired his side to cause a major upset at Colombo as the Sri Lankan tigers were tamed by 167 runs. Batting first, Taylor (135) and Williamson (142) put on 262 runs for the third wicket to take the tourists to 412. In response, Sri Lanka were shot out for 244 – with Tim Southee picking up a fifer. The Sri Lankan bowlers restricted New Zealand to 195 in the second innings, but the hosts still needed 363 for victory. New Zealand’s weren’t letting go of this opportunity and bowled Sri Lanka out for 195 to seal a memorable win.

This match was the epitome of a true battle of equals. It was a nerve-wracking affair, with the team that endured and showed resilience for a longer period of time emerged on top. It took a debutant and a wounded hero for South Africa to earn a draw as fatigue got the better of the Australian bowlers. Michael Clarke’s first innings’ double century was matched by Graeme Smith’s century, but the tourists conceded a lead of 162. Australia pushed South Africa on the backfoot as they set them a target of 430. At the end of Day Four, South Africa were staring at a defeat as they were reduced to 77 for four – with debutant Faf Du Plessis and AB de Villiers in the middle. Du Plessis stood tall between Australia and victory. While AB de Villiers took 220 deliveries for his 33, du Plessis remained unbeaten on 110. Injured hero Jacques Kallis came out to bat and battled the pain to put on a 99-run stand with du Plessis. South Africa lost eight wickets but the Australian bowlers failed to get rid of Du Plessis and had to settle for a draw.

This was second time in the year when victory for either side would have given them the No 1 Test team status. It was also the game that which brought down the curtains on Ricky Ponting’s remarkable career. South Africa were bowled out for only 225 – with Australia gaining the upper hand. However, Dale Steyn came out all guns blazing and picked up four wickets to dismiss the home side for only 163. With a valuable lead of 62 runs, South Africa took the game by scruff of its neck. Hashim Amla’s brilliant 196 and AB de Villiers’s thunderous 169 helped South Africa score 569 runs – setting Australia a target of 632. That target was always going to be an uphill task and Australia were eventually bundled out for 322.

This Test was the start of the English revival in India as they stunned the home side with a comprehensive 10-wicket victory. It started amid controversy as Indian captain MS Dhoni demanded a rank turner after winning the first Test at Ahmedabad. Unfortunately for him, his demand backfired as England spun India out of the game. England spinners, Graeme Swann and Monty Panesar troubled the Indian batsmen while the Indian spin trio of Ravichandran Ashwin, Pragyan Ojha and Harbhajan Singh failed to create a similar impact. Despite a gritty century from Cheteshwar Pujara, India were bowled out for 327 in the first essay with Swann and Panesar picking up nine wickets between them. In reply, England scored 413, as captain Alastair Cook (122) and comeback man Kevin Pietersen (186) tormented the Indian bowlers. Panesar, who took five wickets in the first innings went on to pick six in the second as India were skittled out for only 142. England chased the small target of 58 with ease to level the four-match series at 1-1.