2013 witnessed some breathtaking ODI innings. Here's few of our favourites.

There were many great knocks in One-Day Internationals (ODIs) in the year 2013. There were numerous records broken and many new stars born. There were some really high scores and some innovative innings. Not all of the memorable ODI innings in the year were centuries. Below are the top 10 most memorable innings from 2013:

1. Rohit Sharma 209 vs Australia at Bangalore

This is one of the greatest innings of all-time. The pitches and conditions in this seven-match ODI series between India and Australia heavily favoured batsmen. Totals of 300-plus were scored on a regular basis. Even 300-plus run-chases were achieved with consummate ease. But, when one scores a double century in a 50-over match, it is still special. Rohit Sharma rewrote the record books on November 2 at the M Chinnaswamy Stadium in Bangalore by becoming only the third batsman to score a double century in ODIs. His 209 off 158 balls was nothing short of brilliant. He struck 12 fours and a world record 16 sixes in an innings. India posted 383 for six and despite a late onslaught from Glenn Maxwell, James Faulkner and Shane Watson, Australia were bowled out for 326. India won the seventh ODI by 57 runs and also won the series 3-2. What is more special and unique about Rohit’s innings is that all three times 200 or above has been scored in ODIs, it has been done so by Indians. Virender Sehwag still holds the world record of 219 against West Indies. Sachin Tendulkar scored the very first with 200 not out against South Africa.

Again this is one of the best innings in recent history. Batting first New Zealand posted 359 for three against a strong England bowling attack in the second ODI at Southampton on June 2. Opener Martin Guptill scored a career-best 189 not out off 155 balls. He struck 19 fours and two sixes. What is more, Guptill followed up an unbeaten 103 in the first ODI at Lord’s. England were all out for 273 and New Zealand won the match by 86 runs to take a 2-0 lead in the three-match series.

Virat Kohli’s captaincy career got off to the worst possible start. He won the toss and put Sri Lanka into bat in an ODI at Kingston, Jamaica on July 2. For the loss of just one wicket, Sri Lanka posted 348 in 50 overs. The opening-wicket stand itself was worth 213 runs between Upul Tharanga and Mahela Jayawardne. While Jayawardene scored 107 off 102 balls, it was Tharanga who was absolutely magnificent on the day. The left-handed batsman scored an unbeaten 174 off 159 balls. He struck 19 fours and three sixes. There seemed no answer was available to Kohli or the bowlers to Tharanga’s batting in the match. India were cheaply bowled out for 187 and lost by a massive 161 runs.

England had posted a competitive 293 for seven in 50 overs against Sri Lanka in an ICC Champions Trophy 2013 group match in London at The Oval on June 13. Batting at No 3, Kumar Sangakkara scripted one of the best knocks on English shores in ODIs. He remained unbeaten on 134 off 135 balls as Sri Lanka won the match by a comfortable seven-wicket margin. He struck 12 fours in his innings. As his innings progressed, he batted much better. He made the England bowling attack look like amateurs that day.

Australia had scored a total Indians would never forget in the second ODI at Jaipur on October 16. They posted 359 for five and it is the same total Australia had scored in the 2003 World Cup final on March 23, 2003. That day, they won by 125 runs. But more than 10-and-a-half years later, it was India who had the last laugh. Yes it was not a World Cup final, but a win nonetheless. Rohit and Shikhar Dhawan put together a 176-run opening stand to get the run-chase getting off to a flying start. Dhawan was dismissed for 95 and then Kohli played an extraordinary knock. But more on that a little later. Rohit, though, stayed at the crease right till the end and scored the winning runs in only the 44th over. He ended up scoring 141 in only 123 balls with 17 fours and two sixes. India won the match by a truly magnificent nine-wicket margin. How we wished this had happened in the World Cup final!

Quinton de Kock made life hell for Indian bowlers in a three-match ODI series in South Africa. In the first match, he scored 135 off 121 balls to help South Africa post 358 for four in 50 overs at Johannesburg on December 5. India were bundled out for 217 and the Proteas won the match by a whopping 141 runs. The left-handed wicketkeeper-batsman also scored two more hundreds in the remaining two ODIs. India found no answer to the 21-year-old baby-faced assassin in the series.

England bowled out Australia for 227 in the fourth ODI at Cardiff on September 14. Their start got off to the worst possible start as Clint McKay took a hat-trick to dismiss Kevin Pietersen, Jonathan Trott and Joe Root. England were at eight for three in only 2.3 overs. England captain Eoin Morgan and Michael Carberry steadied things and added a 104-run partnership for the fourth wicket. But both of them were dismissed in quick succession and England had lost half their side with 102 runs still to get. Here is where Jos Buttler scripted a brilliant and highly improvised innings. The wicketkeeper-batsman stitched together a 75-run stand with Ben Stokes for the seventh wicket. Buttler scored 45 of these. Even when Stokes was dismissed, Buttler made sure England won the match by three wickets in the last over. He was unbeaten on 65 off 48 balls with five fours and two sixes.

Dhawan’s first ODI century came against South Africa in the Champions Trophy at Cardiff on June 6. He scored 114 off 94 balls against a very strong bowling unit. He struck 12 fours and one six as India posted a total of 331 for seven in 50 overs. South Africa bowled out for 305 and India won the match by 26 runs.

India posted 303 for nine thanks largely down to MS Dhoni’s 139 not out at Mohali in the third ODI on October 19. Australia needed 44 runs off 18 deliveries to win the match and their chances seemed few. Ishant Sharma bowled the dreaded 48th over of the innings. James Faulkner smashed 30 runs off the over to reduce the deficit to only 14 off 12 deliveries. The sequence was 4,6,6,2,6,6 in that over. From thereon, it was too simple for Australia and Faulkner finished it off in style with a six off R Vinay Kumar in the last over. He scored 64 not out off only 29 balls with two fours and six sixes. Australia won the match by four wickets.

Rohit’s innings of 141 not out in the mammoth run-chase was described above. India’s comfortable win over Australia was also due to the fact that Kohli scored 100 not out off only 52 balls. He struck eight fours and seven sixes in his innings. This was the seveth fastest ODI hundred and the fastest by an Indian. A truly amazing knock! 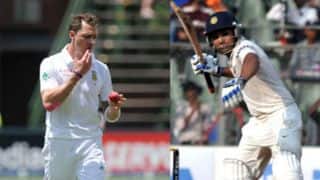 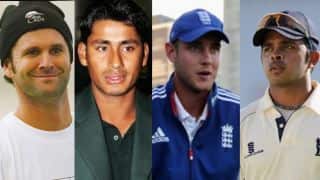 2013 Yearender: The biggest controversies of the year; Spot-fixing, DRS debacle, homework-gate and more