From the whitewash in India to a stunning Ashes win, Australia perhaps had the most eventful year.

From the whitewash in India to a stunning Ashes win back home, Australia had perhaps the most eventful year in 2013. While there were controversies surrounding the team — from the ‘Homework’ affair to Mickey Arthur being sacked just before an important series, David Warner punching Joe Root, Michael Clarke and Shane Watson having tough time together, Australia ended an otherwise disappointing year with the ultimate high — regaining the Ashes after four years. Devarchit Varma takes a look at Australia’s performance in 2013…

The former world dominators perhaps did not have a roller-coaster ride in past couple of years as they had in 2013 — controversies, sackings, losses, drubbings, despair, wins and finding the Australianism again — all rolled in one.

The team that began 2013 with a win over Sri Lanka, followed it up with one of the most anticipated series of the year — the tour of India for four Tests wherein they were whitewashed — and the Ashes loss to England in middle of the year proving that the team from Down Under has many bases to cover, before they start putting up a fight again. But Australia, known for fighting it out till the end, lived up to their reputation and put up a splendid show in the return Ashes affair and reclaimed the urn after four years.

Out of the 14 Tests that Australia played in 2013, they won only five. Perhaps this record can tell the kind of year they had. Australia started off with a five-wicket win against Sri Lanka at Sydney, following which their seasoned campaigner Michael Hussey retired and his departure left a huge chasm in their batting. After that win at Sydney, Australia lost four Tests in India and three in England, and drew three. They lost six matches on a trot, and despite putting up a good fight in England, especially in the final Test at The Oval, they could not win. Desperate Australia took all the necessary steps that they could, and bounced back in a remarkable manner towards the end of the year to win four Tests on a trot, thus reclaiming the Ashes and improve their Test record in the year to some extent.

Australia’s record in the One-Day Internationals (ODIs) too wasn’t great. Out of the 26 ODIs they played in 2013, they won only 12, which include an emphatic 5-0 win over the West Indies at home. Australia did not last long in the final edition of the ICC Champions Trophy 2013 as well, as they crashed out of the tournament after a 20-run loss to Sri Lanka at Cardiff. They did put up a good fight against India in a seven-match series, but lost it 3-2.

Australia’s performance in the Twenty20 (T20) format was even poorer, as they won only one game — against England at Southampton — out of the six they played this year.

While the team had a miserable run on the field this year, there were enough controversies and developments that kept the team in news.

The tour of India saw Australia hitting one of their lowest ebbs, when four frontline players, including the then vice-captain Shane Watson, were axed from selection for the third Test against India of the Border-Gavaskar series in 2013. Australia’s former coach Mickey Arthur had asked the team to give a short presentation in any form, explaining why they had fared poorly in India and four players — Watson, Mitchell Johnson, James Pattinson and Usman Khawaja — failed to adhere to the deadline, which resulted in them being expelled from the squad. The controversy took a ugly turn when Watson returned home in a haste, signalling that he would contemplate his future in Tests. However, Watson returned for the final Test in time and led Australia in absence of Michael Clarke.

The Australian side was indeed no-match for a strong England outfit going into the Ashes 2013, and they didn’t begin the tour on a positive note. Opener David Warner was dropped from the side during the ICC Champions Trophy for punching England’s Joe Root, and a fortnight before the start of the Ashes, Cricket Australia decided to sack Arthur and appoint Darren Lehmann as Australia’s head coach. A day after Arthur’s sacking, Clarke resigned as Australia’s selector — a job which his predecessor Ricky Ponting fought hard for throughout his tenure.

Arthur’s sacking opened a can of worms, as the South African made sweeping statements that revealed that all wasn’t well between the players, especially the captain and his deputy. Arthur claimed that Watson was a ‘cancer’ in Clarke’s eye for the national side and he was like the ‘meat in the sandwich’ between the two players. Looking back at these controversies, Cricket Australia (CA) stepped in perhaps at the right time, putting an end to all the off-field matters and putting the team’s cause ahead, by appointing much-revered Lehmann for the coaching job and the results speak in favour of the move.

As another surprising turn of events, Ricky Ponting, who had retired last season, revealed his reservations against Clarke. Till then, many believed that Clarke and Ponting shared a very special relationship, but the latter’s claims in his autobiography spoke otherwise. Nevertheless, they weren’t as damaging as the other controversies that Australia had in the year and Clarke remain unperturbed with the events that happened off the field and stayed focussed on the job of retaining the Ashes.

England arrived in Australia with the hope of winning the Ashes for a fourth consecutive time, but little did they know what Australia had in store. While on tour of England, Australia claimed they managed to find chinks in England’s armour and the coach Lehmann promised to make the most of the opportunity when the Ashes rivalry was resumed. The likes of Alastair Cook, Kevin Pietersen and Ian Bell, who had till then flourished against Australia, were denied scoring runs in their favourite areas and the Australian bowlers did a splendid job to regain the Ashes. The rise of Johnson was the success story for Australia in 2013 and by the look of things; their fortunes in Test cricket are certainly improving. 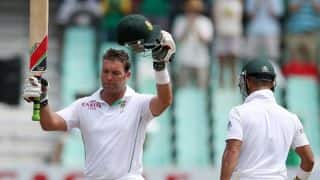 Jacques Kallis: A career in numbers