The year 2003 saw some absolutely amazing innings. No 11 scoring for Australia to rise of a few debutants with sensational knocks. Below are the top 10 Test innings of 2013:

Australia had lost five wickets in a span of just nine runs to start making it look more than a dramatic collapse. At 117 for nine, a 19-year-old Ashton Agar walked out in the middle to join Phil Hughes who was busy in his own worries dealing with an enthusiastic bunch of England bowlers. It was quite obvious that Hughes would be retaining most of the strike and try to score a few quick runs before the young bloke at the other end gets exposed. Soon the quick runs started coming, not from the bat of Hughes but from Agar who swept Graeme Swann to get his first boundary. The nervousness soon turned into a joyride with Agar smashing around and reaching his maiden half-century. Australia neared England’s total of 215 and things started to look embarrassing for Alastair Cook and co. Agar continued his dream debut and crossed the highest by a No 11 set by Tino Best with a score of 95 against the same opposition. As everyone anticipated a hundred on debut, Agar swung one Stuart Broad delivery only to be caught in the deep by Graeme Swann. For a moment everyone was perplexed with their reactions. They had expected a ton to be scored only to come back to their senses that it was a No 11 batting along with Hughes. He walked back to a standing ovation from the spectators at Trent Bridge.

9. Shikhar Dhawan’s sensational debut against Australia and the rise of India’s new opener

When India picked Shikhar Dhawan for the Mohali Test, it wasn’t that Dhawan was crying out loud with his domestic performances; but the abysmal form of a certain explosive Virender Sehwag. The selectors and captain must have hoped that he somehow clicks and gets at least some 50 odd to reduce the headache of India’s woeful opening starts. Dhawan in the process, with a unique swagger sporting a moustache had his own fairytale to tell. He filled up Sehwag’s absence with a similar style of innings. He just breezed through his innings scoring a century in just 85 balls making him the fastest Test centurion of debut. The Australian bowlers were made to look worse than net bowlers with spinners bearing the brunt on most occasions. By the end of the day, he had smashed 33 fours and two sixes. Resuming on Day Two, everyone waited in anticipation of a maiden double ton to place him into an elite league having just five players. He was unfortunately out caught by Ed Cowan off Nathan Lyon.

Coming in to a series under enormous pressure of losing 0-8 overseas and a home defeat against England, there was enormous pressure on MS Dhoni. The fact that he hasn’t been a reliable batsman in Tests only added to the murmurs. On a dustbowl which had started to disintegrate and offered vicious bounce, Dhoni smacked the first double hundred of his career. The highlights may show that he just breezed through every ball, the wicket was still a tough one. The disdain with which he hammered Nathan Lyon could demoralise any spinner. He shared a 128-run partnership with Virat Kohli. He also played along with Bhuvneshwar Kumar towards the end and shared a 140 runs partnership. The innings not just quelled the criticism of his batting but presented a merciless Dhoni at his best.

7. Rohit Sharma justifies his talent and maturity with 177 on debut vs West Indies

Rohit Sharma‘s talent and experience had made their presence felt for such a long time that the situation when he came to bat on debut was just a matter of fate. A situation ideal for him to announce his arrival in Tests. At 83 for five, India were down and out against West Indies. The innings was not a display of his already great talent but the one of having the right temperament to navigate through the tough situations in the longest format of the game. Rohit played a brilliant innings and shared a 270-run stand with Ashwin (124). With all the focus on Sachin Tendulkar playing his 199th Test, Rohit passed his ‘Test’ with flying colours. In the process of his debut ton, Rohit had already scripted some sensational victory in the ODIs that preceded against Australia.

India win by an innings and 51 runs.

Huge cracks on the pitch, Mitchell Johnson and the rest of pace battery charging at you when your team is in trouble, it takes more than skill to fight it out. Playing just his second Test, Ben Stokes played one of the defining innings of his career which helped him earn praise from the legends in the game. Chasing 400+ with 0-2 down, it was just a formality for England to lose their third on the trot. But Stokes played a brilliant innings along with Ian Bell in the last session of Day Two. Short-pitched bowling was the biggest bane for England batsmen in the Ashes 2013-14, but Stokes trusted the bounce of the wicket and faced the thunderbolts hurled at his rib-cage with ease. With the ball deviating sharply off the cracks, it was more than just brilliant concentration to keep going.

In the same Test, Steven Smith had scored his first hundred in a match-winning cause. There were many similarities of Smith with Stokes’s but the pressure under which Stokes batted sets him apart.

The occasion was perfect to signal the start of a new era. It was the first Test since Sachin Tendulkar’s retirement. Playing away from home, and having lost the ODI series, India were expected to be thrashed by South African pace. Kohli’s innings of 119 marked the start of a new No 4 who batted with patience, responsibility and elegance. Kohli didn’t just score a ton to prove his credentials but instilled a sense of self-belief that his fellow batsmen could make the difference in any overseas conditions. And in the second innings, while Kohli continued his fluent run, India’s new Mr Dependable Cheteshwar Pujara too scored 153. The Test itself saw some brilliant quality of cricket, and the outcome too was equally thrilling.

4. Ian Bell’s 113 sets up England to seal the Ashes at Chester-le-Street

England were confident while Australia were under pressure. But the momentum was surely with the Aussies after a convincing draw at Manchester in the fourth Test. It was one of those Tests where either team could run away by seizing little moments of the game. England posted 238 while Australia responded with a 32-run lead. In the second innings, England could have easily lost their way after they were 49 for three. But Bell continued his fluent form and almost single-handedly pushed the hosts ahead. He did get some support from Kevin Pietersen (44) and Tim Bresnan (45). The characteristic drives, late cut towards thirdman where all part of this innings under pressure. That innings certainly forced the media to call it ‘Bell’s Ashes’. Later on, a dramatic Australian collapse induced by Stuart Broad helped England seal the Ashes.

When he looks back at the start of the year at this innings, Matt Prior would surely agree that cricket is a game of uncertainties and so is the form of a player. In March 2013, Matt Prior played a career-defining Test innings saving England from the jaws of defeat. Chasing a mammoth target of 481, the visitors were on the verge of being humbled by a not so threatening New Zealand side which did have the pace attack to push England though. First it was Ian Bell who fought hard only to be dismissed for 75 with 33 more overs left in the day. Prior however kept going, with the help of Stuart Broad who took his own time to explain the Kiwis what frustration feels like. Broad scored just six runs but hung on for 77 deliveries! Prior in the meanwhile scored the bulk of the runs. Things looked set for England to sneak a draw with three wickets intact and Broad in no mood to relent. Until, it was Kane Williamson who got two wickets in a span of three balls. Prior somehow managed to pull that draw but he had his nervous moments early in the innings surviving a DRS call against him and a few edges which passed perilously close to his stumps.

Result: England drew with one wicket to spare.

After Auckland, let’s come to Dunedin towards the end of the year where yet another heartbreak awaited New Zealand. West Indies, with a batting line-up which was been terribly outclassed by Indians looked set to be bulldozed by a formidable pace attack in the first Test. New Zealand toyed around with the West Indian bowlers piling on 609 and then bundled out the opposition for 213. Following-on with a deficit of 396 runs, West Indies had to convince themselves to hang around and reduce the bitterness of a defeat. Darren Bravo walked in at 18 for one and was beaten first ball by Trent Boult. Soon the stylish left-hander along with Kirk Edwards scored at ease taking West Indies past 100.

Bravo’s vigil lasted for a marathon eight and half hours. That innings was still not enough to see his team out of danger. Chasing 112 on the last day, the Kiwis were left frustrated with rain interrupting their chase with 33 runs remaining. Rain had certainly been waiting and enjoying Bravo’s innings until it decided to have a say.

The two centurions are right up there among the most memorable test innings ever played. Chasing a target that had never been conquered before, Faf du Plessis and AB de Villiers scripted a sensational innings that left MS Dhoni and co. on the cusp of a huge embarrassment. Du Plessis already has an experience of saving a Test from the jaws of defeat on his debut, while de Villiers is just brilliant across formats. Chasing a target of 458, the Proteas were 197 for four when these two joined with more than two sessions to go. It was a classic duel between bat and ball with the former emerging stronger against the run of play on the last evening. After a record 205-run partnership, De Villiers was bowled for 103. However, the fortunes of the match changed with Faf du Plessis dismissed by a brilliant run-out. It had all that was required for a perfect advertisement of Test cricket.

There many other centuries which were among the best; Michael Clarke’s 187 at Manchester and 130 at Chennai are definitely right up there. Graeme Smith scoring a double ton against Pakistan. Cheteshwar Pujara certainly had a great year with a double century against Australia in March and played many more consistent innings. One of the best ones under pressure was Kevin Pietersen’s 113 at Manchester which helped England stay alive in the third Test as they sealed the series in the fourth. Towards the end of the year, Ross Taylor too made his presence felt with three tons in as many matches against West Indies which included a double ton.

In the end, 2013 was a year of impressive debuts and youngsters taking over the mantle of their respective teams in Tests. It marked the rise of a young Indian generation in cricket. Players like Ben Stokes and Steven Smith showed what they are capable of in Tests. At the same time, the old warhorses too made their presence felt. 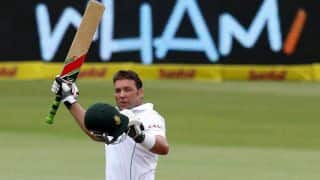