The highlight of the year for Pakistan was the 3-0 'greenwash' of Australia.

Pakistan ended the year 2014 with a One-Day International (ODI) series loss against New Zealand in UAE. It was the year where they were at their best at some points but they performed poorly in the ODI format. Varun Arora looks a back at Pakistan’s performance in 2014.

Pakistan steamed into the New Year 2014 in United Arab Emirates (UAE) where they were to play three-Test series against Sri Lanka. Out of these three Tests, Pakistan managed to win one, lose one and draw another Test, ending the series on an equal note. Pakistan then travelled to Bangladesh in February to play the Asia Cup 2014. It was in this tournament that Pakistan edged out India by just one wicket and achieved one of the significant victories of the year. Pakistan, however, were rolled out in the final as Sri Lanka won the match by five wickets. Then arrived the ICC World T20 Cup 2014 in Bangladesh where Pakistan were creamed out by West Indies before the semi-finals.

After the World T20 in Bangladesh, Pakistan team departed to Sri Lanka to play followed by three-match One-Day Internationals (ODI).  This was possibly the lowest point Pakistan had in the calendar year 2014. They lost the Test series 2-0 and were brought to their knees in the ODI series, which they lost by a margin of 2-1.

But when Pakistan returned to their favourite playing turf in UAE, things improved considerably. Australia arrived in UAE to play a single T20I, three ODIs and two Tests in during October-November.  Pakistan performed contrastingly in both shorter and longest format of the game. Australia dominated the ODIs and T20I and registered victories but when the Tests arrived, the world saw a whole new Pakistan outfit.

Their players started performances consistently , records were wiped up, bowling performances emerged and new names earned recognition. Pakistan won the first Test 221 runs and the other Test by an even bigger margin of 356 runs.  A sense of solidity and class displayed from the performance portrayed by Pakistan.

After Australia departed, there neighbouring nation, New Zealand arrived in UAE a longer series which included two T20Is, five ODIs and three Tests which lasted for a period of nearly 40 days. The Test series and the T20I series were draw while New Zealand had the last laugh as they won the ODIs by 3-2. Pakistan’s ended the year with a poor display in the ODIs.

Saeed Ajmal banned: Pakistan’s key off-spinner Saeed Ajmal was banned in September by the International Cricket Council (ICC) after the bowling test revealed he bent his elbow more than the permissible limit of 15 degrees. Reports later revealed that he had bent high arm over 40 degrees for various degrees. Later, Ajmal started the rehabilitation process under the mentorship of Saqlain Mushtaq but in the dying days of 2014 it was revealed that Ajmal had backed out the ICC World Cup 2014.

Younis Khan’s batting performance against Australia: Younis Khan celebrated his comeback into Pakistan colours with three consecutive centuries.  He broke several records on his way. He also reached his 8,000 runs in Test cricket and became the batsmen with most tons for Pakistan in Test.

Ahmed Shehzad:  Shehzad added a total 1,435 runs in all formats for Pakistan playing in 35 innings in 2014. During the year he hit six centuries and five fifties. 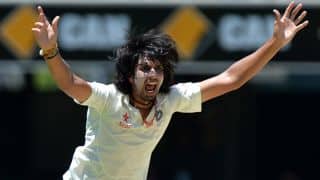