A list of memorable debuts made in the year, which includes names such as Stiaan van Zyl, etc.

Like always, the cricket fraternity was blessed with some brilliant talent coming to the fore on the international circuit in the year 2014 as well. Devarchit Varma lists down the top 10 exciting debuts across all formats.

The year 2014 was an exciting one for teams across the globe. While many went back to the drawing board and chalked out new plans, strategies and manpower, a lot of teams also introduced talented cricketers who made strong impressions in the initial stages of their careers. Let’s take a look at a few cricketers who made their international debuts across formats, and created a lasting impression in the memories of fans and critics alike.

Taijul Islam (Bangladesh, Test and ODI): The 22-year-old created history in the fifth One-Day International (ODI) against Zimbabwe. Taijul became the first bowler in the history of the game to take a hat-trick on ODI debut, as he rattled the Zimbabwean batting order to help Bangladesh register a comfortable five-wicket win. The left-arm bowler returned with the figures of 7-2-11-4 in his debut game.

Taijul had a memorable debut in Test cricket as well, as he claimed five wickets on against the West Indies. Unfortunately, his effort could not help the Bangladeshis avoid a 10-wicket thrashing at the hands of the Caribbean side. Taijul would later claim as many as eight wickets in Zimbabwe’s first innings of the first Test at Dhaka, with Bangladesh picking up a three-wicket win.

Yasir Shah (Pakistan, Test):  Pakistan and the cricket fraternity wondered whether their bowling attack would be able to challenge the Australians in the absence of Saeed Ajmal in their two-match Test series, but Yasir proved them wrong as he bagged as many as 12 wickets in the two Tests. He formed a very successful bowling partnership with Zulfiqar Babar, and helped Pakistan beat Australia in a Test series after 20 years. Yasir continued the good work against New Zealand as well, claiming 15 wickets in their three-Test series.

Taskin Ahmed (Bangladesh, ODI): On his ODI debut against India in the second of their three-match series, Taskin Ahmed produced a performance that had the Indians struggling on all fronts. He bowled with terrific pace and movement, and the energy that the 19-year-old carried in that match was simply spell-bounding. He claimed five wickets from his eight overs to help Bangladesh shoot out India for a paltry 105, but the hosts collapsed against another fine bowling effort, this time from Stuart Binny.

Jimmy Neesham (New Zealand, Test): When the debutant Jimmy Neesham and Brendon McCullum joined forces with New Zealand tottering at 94 for five, little did the world know what would follow. The two New Zealand batsmen put up a gigantic 179-run partnership for the seventh wicket after McCullum and BJ Watling had bailed the hosts out of trouble with an awe-inspiring 352-run stand. The McCullum-Neesham stand not only bailed their side out of trouble but also ensured that India were in danger of losing the match. Neesham faced 154 balls and swatted 20 fours to score 137 not out, as New Zealand declared their innings at 680 for eight, the highest score by any team in the second innings in the history of Test cricket. Neesham’s century on debut was also the 10th for New Zealand on debut.

Stiaan van Zyl (South Africa, Test): The West Indies’ tour of South Africa was always going to be a bland affair because of the troubles the Caribbean team is facing, and the fact that even at full strength they might not have been much of a challenge for the powerful South African side. The hosts, who are in a sort of transition period, gave a chance to the young Stiaan van Zyl. The left-hander grabbed the chance with both hands as he faced 130 balls to score 101 not out, cracking 15 boundaries to help South Africa attain a huge first innings total and win the game against their lowly opponents by an innings and 220 runs.

Mark Craig (New Zealand, Test): The Kiwis always needed a quality spinner who could fill the void created by the prolonged absence of Daniel Vettori. Mark Craig, picked out of the blue, raised their hopes with his impressive debut against the West Indies. At Kingston, Jamaica, the right-arm off-spinner bagged eight wickets on debut — the best by a New Zealand player on debut — to help the Kiwis trounce the hapless West Indies by 186 runs. While in the first innings Craig snaffled four for 91, he returned in the second essay to claim another four wickets for 97 runs.

Dane Piedt (South Africa, Test): The off-spinner created history when he became the first South African bowler to take a wicket off the first ball of his Test debut. He claimed eight wickets in the match against a lowly Zimbabwe side as South Africa had no qualms in hammering their African opponents by nine wickets in their only Test at the Harare Sports Club.

Matt Henry (New Zealand, ODI): The right-arm fast bowler registered the third best figures for any New Zealand cricketer on ODI debut, as he returned with the impressive figures of 10-1-38-4 to help his side smash India in the fourth match and seal an emphatic 4-0 win with one game ended in a thrilling tie.

Michael Lumb (England, ODI): The 34-year-old became only the second England player and the ninth overall to smash a century on ODI debut. Lumb achieved the feat during the first ODI against the West Indies at North Sound in February 2014. He faced 117 balls and smashed seven fours and two sixes to score 106, but his effort went in vain as England failed to chase down a target of 270 set by the hosts. Curiously, it remains his only ODI appearance till date.

Josh Hazlewood (Australia, Test): The right-arm pacer was close to making it to the Australian national side for a while, and got his debut against India in the Test series towards the end of the year. Hazlewood made his debut in the second Test at The Gabba, Brisbane, and claimed a five-for to help Australia keep the tourists in check. However, Hazlewood’s first wicket came off an umpiring error; he bowled a bouncer to

Cheteshwar Pujara — who was out caught behind — but the ball landed in Brad Haddin’s gloves after deflecting off the batsman’s helmet. Nevertheless, Hazlewood bowled with a lot of heart on Day Two of the Test after a disappointing opening day to help Australia bounce back. 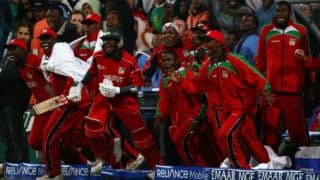