The West Indians had shown great promise as an outfit in the recent times.

The West Indians had an average cricketing year in 2014, which mostly ended in disappointment. Amit Banerjee takes a look at their performances across the formats throughout the year, which has finally come to an end.

The West Indians had shown great promise as an outfit in the recent times, having won the ICC World Twenty20 title in 2012 by defeating a strong Sri Lankan side. A side that has the likes of Chris Gayle,Dwayne Bravo, Marlon Samuels, Darren Bravo, among others, was expected to be a major force in the One-Day International (ODI) sphere to say the least.

The year of 2014 however, was not one that turned out to be the most pleasant of years in the minds of the West Indians. It was one wherein the talent of the young side was seen in patches, but they were so deeply engrossed in controversies that it hampered any positive growth in the side.

The year began for the West Indians on a record-breaking note, as Corey Anderson broke Shahid Afridi’s record for the fastest One-Day International (ODI) century after reaching his ton in just 36 balls in the third ODI of the five-match series played on the first day of the year. West Indies lost the 21-over match by a massive 159 runs, though the series was drawn 2-2, after the visitors won the final ODI by 203 runs. The tour of New Zealand did not end on a positive now, however, as West Indies were whitewashed in the two-match T20I series.

Next in schedule was a two-match T20I series and a one-off ODI against Ireland. The Irish, who have been considered many a time for being granted Test status, surprised hosts West Indies in the 1st T20I, toppling the favourites by six wickets. The hosts managed to end the series on a stalemate after winning the second game by 11 runs. The only ODI of the tour too was closely fought, as West Indies chased down a 203-run target with four wickets to spare.

The next series lined up was the three-match ODI and T20I series lined up against England at home, which was won by England and West Indies respectively by a margin of 2-1. The contest between the two sides was fairly even in both formats, although West Indies’ success in the T20I series gave them a major boost of confidence in their defence of the ICC World T20 title, which was due to begin right after the conclusion of this series.

The West Indies entered the T20 mega-event as favourites, a tag that has not been associated with them often since the early 90s. After losing their opening encounter against India by seven wickets, the West Indians began to display the kind of performance that they had put up in the previous edition, steamrolling Bangladesh, Australia and Pakistan to storm into the finals. Their performance against Pakistan, in which the latter were bowled out for 82 to give the their opponents an 84-run win, established the fact that the West Indies were a feared entity in the shortest format of the game.

Their progress came to a screeching halt in the semi-final as they lost to an inspired Sri Lankan side, the same opponents they had defeated in the 2012 final, by 27 runs in a rain-affected game. It however, turned out to be their performance of the year.

New Zealand toured West Indies during the summer of 2014, and looked to maintain their dominance against the West Indians after having defeated them in the Test and T20I series in their last meeting in the Black Caps’ backyard. New Zealand once again came out on top in the Test series, winning it 2-1. While New Zealand dominated with the bat, with the top-three run getters of the series being Kiwis, West Indian bowlers Kemar Roach and Suleiman Benn emerged the top wicket-takers of the series. The Twenty20 spoils were however, equally distributed among the two sides with a 1-1 draw.

Bangladesh were scheduled to tour the West Indies in the months of August and September, with three ODIs, a solitary T20I and two Tests in their itinerary. The series did not surprise many as Bangladesh were blanked 0-3 and 0-2 in the ODI and Test series respectively, while the only T20I was washed out.

West Indies were scheduled to tour India during the month of October, though there were reports of trouble brewing in the West Indian camp. While India were the clear favourites for the five-match ODI series, as well a T20I and three Tests. Right from the start of the series, the West Indians were showing signs of rebellion, threatening to stage a walkout in the games due to an ongoing tiff between the players and the West Indian Cricket Board (WICB). During the fourth ODI, skipper Dwayne Bravo came out to the toss with the entire West Indian team, announcing their intention to pull-out from the series. Despite intense intervention by the Board of Control for Cricket in India (BCCI), the series was ultimately cancelled, with India winning the series 2-1.

West Indies’ last engagement of the year was the tour of South Africa, which is still going on as of now. South Africa won the first Test comfortably by a massive margin of an innings and 220 runs, though the visitors managed to fight back in the second Test at Port Elizabeth as the Test ended in a draw.

While the West Indians have shown some potential in the shorter formats of the game, especially in the T20Is, the have a lot to prove in Tests. Though they will not be entering the upcoming World Cup as favourites, they surely cannot be written off at any stage. 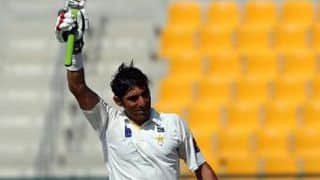