2015 Yearender: Cricketers who got hitched in 2015
By Sakshi Gupta

Following India’s home series against South Africa, the attention turned towards Rohit Sharma’s wedding to his long-time girlfriend, Ritika Sajdeh, who is a sports manager and handles Rohit’s engagements and is present with him in almost all the matches he plays. He became fourth Indian cricketer to get married after Suresh Raina, Dinesh Karthik and Harbhajan Singh who tied knot earlier in the year. The year 2015 witnessed as many as 10 cricketing stars making news as they got hitched. The wedding season in the cricket fraternity kicked off with Shaun Marsh’s wedding in April. Here is the list of 10 cricketers who got hitched in 2015:

The Australian tied knot with his long time girlfriend and Channel Seven journalist Rebecca O’Donovan on April 2. The duo got married almost after one-and-half-years of Shaun’s proposal. The ceremony happened just after the end of ICC Cricket World Cup 2015 which saw his country becoming the champions for a record 5th time. The winning side had Shaun’s younger brother, Mitchell Marsh.

As soon as India crashed out of the ICC Cricket World Cup 2015 losing to Australia in the semi-final, the news of Raina’s wedding to lady love Priyanka Chaudhary suddenly became the talking point. Raina married on April 3 in a private affair in Delhi. The match was fixed by the duo’s parents. Yes, it was an arrange marriage! Although the two knew each other since childhood, they hadn’t stayed in touch until 2008. READ: Yearender 2015: Playing XI of retired cricketers from ODIs

It was a hat-trick of weddings, Warner was next. He married Candice Falzon on April 4 after dating the model-plus-athlete for almost 18 months after they met in 2013. The explosive and aggressive Warner surprised everyone when he shed tears seeing Candice in the wedding dress.

Sri Lanka’s Chandimal married his long-time girlfriend Isika Jayasekara at a ceremony in Colombo on May 1. He became the fourth cricketer in 2015 who broke thousands of hearts of young female fans.

Shahzad, Pakistan’s opening batsman and the ‘selfie king’ married Sana Murad on September 19 in a grand affair that witnessed his close friends and colleagues Shahid Afridi and Mohammad Hafeez.

Harbhajan and Geeta Basra, who have been linked with each other for several years, finally tied knot on October 29. The couple had opened up about their relationship only earlier in the year. Their wedding was a huge affair with lots of stars included in the guest list.

Ritika became Mrs Rohit Sharma on December 13. The wedding ceremony that took place at a poolside hotel Bandra, Mumbai witnessed the likes of MS Dhoni, Virat Kohli, the Ambani family and many other stars from the industry.

The entire year saw speculations about Yuvraj dating Bollywood actress Hazel Keech. The two broke the suspense when sources had revealed the news about their engagement on Diwali. This news definitely was heartbreak for thousands of Indian female fans!

Robin Uthappa got engaged to long-time girlfriend Sheetal Gautam on November 12. This news broke just after Harbhajan’s wedding and Yuvraj’s engagement. Robin who got engaged a day after his birthday shared a picture on social media with his finance announcing the good news.

This article was first published in CricLife Stuart Broad early blows give England upper hand with SA 55 for 2 going into tea on Day 2, 1st Test at Durban 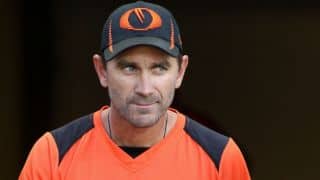