Pakistan’s performance in the longest format has been nothing short of fantastic.

Of course, there was nothing new about this. Younis has been doing that year after year, having to settle for contests at frustratingly vacant grounds of Dubai and Abu Dhabi and Sharjah as ‘home’ matches; Yasir has just joined the bandwagon, and has been lauded by masters of his art — Shane Warne and Anil Kumble, no less. Yearender 2015: Top 10 debut performances across formats

Indeed, it was the era of a legendary batsman and a prodigious leg-spinner. While Younis has strengthened his stake as the Pakistan’s greatest batsman, Yasir has emerged as one of the greatest delights to watch and to have on the side. Together, between them, they may shape Pakistan cricket — at least till Younis is around.

There is no reason why he should not go on. He is 38, but is still fit, and has quit playing the shorter versions. His captain, arguably the best in world cricket, is 41, and is in no mood to quit anytime soon. Younis, the first Pakistan batsman to reach 9,000 Test runs, will certainly want to go on. India and Pakistan: Politics, Neighborhood and Cricket

If you do not take Yasir seriously, do note that Pakistan have a 5:1 win-loss ratio despite the absence of Saeed Ajmal, the man who was the backbone of their attack till 2014. If they have started winning consistently, nobody has been more responsible for that. India vs Pakistan 2015-16: Cricket needs the old rivalry back

Yasir claimed 24 wickets in the series at 19.33 on pitches designed to help Sri Lanka. Against England he played two Tests (England drew the one he did not play), but they earned him 15 wickets at 21.53.

One can only hope Yasir’s suspension — he failed a dope test — is merely a provisional one, and he gets back to business at the earliest.

But let us forget Younis and Yasir for now. Pakistan have played only 8 Tests this year, but six men — Younis (see? I cannot get over him), Mohammad Hafeez, Asad Shafiq, Misbah-ul-Haq, Azhar Ali, and Sarfraz Ahmed — have all scored over 450 runs at above 45. Add Shoaib Malik’s brief tenure (292 runs at 48.67), and you get a batting line-up to match any.

Surprisingly, the bowling has not been as strong. Barring Yasir, only three men have averaged below 10; two of them are Hafeez (banned from bowling) and Malik (retired). Wahab Riaz and Rahat Ali have been impressive in bursts, but the only fast bowler to have had any impact of sorts has been Imran Khan.

Worse, barring Wahab, none of the fast bowlers played more than four Tests, which makes one question selection policies and address fitness. For a country with a reputation of being an endless reservoir of fast bowlers, this has certainly not been good news.

That aside, Pakistan’s performance in the longest format has been nothing short of fantastic, more so because they do not get to play at home. The three matches they did not win were all due to outstanding individual performances: Tamim Iqbal and Imrul Kayes broke all kinds of records en route to a 312-run opening stand at Khulna after Pakistan led by 296; both Dhammika Prasad and Dushmantha Chameera had the best Tests of their careers at P Sara; and Alastair Cook seemed to have grasped the concept of timelessness at Abu Dhabi.

Four of Pakistan’s five Tests were easy. Shan Masood did not do much barring that Pallekele chase of 382, but his 125 will be talked about in years to come. The omnipresent Younis was there with his 171 not out, which was astounding even by his lofty standards.

Misbah was there, as always. With the burden of ODIs behind him, he looks all set to notch big hundreds again in Test cricket. In Azhar Ali they have a man who can hold an innings together; in Shafiq, a perfect foil to the belligerent men batting on either side of him in the line-up; and then, there is Sarfraz.

Exactly why it took Pakistan to launch Sarfraz in Test cricket would remain a mystery. His failure on debut at Hobart, 2009-10, was not forgiven for three years; and when it was, he was sidelined again for a year despite the fact that he had taken the attack to Dale Steyn in his final innings.

Now that he has got a proper run, Sarfraz seems perfectly at ease with Test cricket. Bowlers and captains across the world fear him, for they know he can change the course of a Test in a session. The Lankans, especially, will remember his 96 at Galle and 78 not out at Pallekele, both of which helped define the outcome of the Tests. England saw him play four cameos; one of them saved a Test; and another brought Pakistan back into the team.

A bright year awaits Pakistan. Talent is something they are certainly not short on, what with Mohammed Aamer aiming a comeback. Had the political scenario been different, they could have given most sides a tough run for money.

Pakistan’s World Cup campaign was typically erratic: they lost to India, and even West Indies; Zimbabwe gave them a run for their money. And yet, they routed South Africa, and had Rahat not dropped that catch, they might even have knocked out the eventual World Champions.

The World Cup saw Misbah quitting ODIs with 5,122 runs at 43.40, and bafflingly, with zero hundreds. Shahid Afridi also called it a halt. And out of nowhere, Azhar Ali was roped in as captain.

Inconsistency continued. After their brilliance against South Africa and Australia, they managed to lose 0-3 to Bangladesh, and even lost the T20Is 0-1. But all that paled into insignificance, for Pakistan finally hosted international cricket.

Zimbabwe came forward. They lost 0-2 in both the T20Is and the ODIs, but it mattered to neither side. What was important that international cricket was being played at Pakistan; a generation of cricketers could finally play at their real home instead of an adopted one.

Note: The comeback of Mohammad Sami during this series must have been one of the most curious ones in international cricket this year.

They beat Sri Lanka 3-2 in the ODIs and 2-0 in the T20Is. And then, keeping up with their amazing inconsistency, despite winning the Test series and going up 1-0 in the ODIs against England, they ended up losing the series 1-3 and were whitewashed 0-3 in the T20Is. Life had come a full cycle for them, for they had started the year with a 0-2 drubbing in New Zealand.

Pakistan’s report card read 12 wins and 14 losses in ODIs, and 6 wins and 3 losses in T20Is. Combine the two, and you get a win-loss ratio of over 1. But then, that perfectly sums up the year for them — one that has seen them beat Australia, South Africa, and Sri Lanka, and lose against West Indies and Bangladesh.

A word here, for Malik, who came back to Test cricket (in spectacular fashion, too) based on only his limited-overs performances. Going into the England Test series, his numbers — in ODIs and T20Is combined — read 618 runs at exactly 61.80 and a strike rate of 114.9; and 11 wickets at 28.09, and an economy rate of 5.16. The numbers fizzled out a bit against England, but he still remained Pakistan’s best limited-overs cricketer.

As for 2016, Pakistan have World T20 to look forward to. Their captain, always popular in India and currently the leading wicket-taker in T20Is, will certainly be leading one of the strongest sides in world cricket.

Before that, of course, there will be a tour of New Zealand, and they spend the summer in England. Exciting days lie ahead. All they need is Yasir to be back. That one man can make a lot of difference. It has been over two decades since a blonde Victorian bowled his somewhat famous first ball in Test cricket on English soil.

Indeed, Pakistan — or for that matter, any side — can do with a superstar. 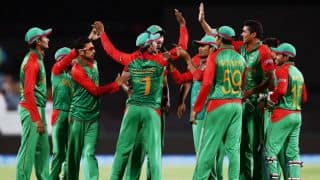