The year 2015 was a productive one for bowlers, with both spinners and pacers doing consummately well. The batsmen had their say as well, but a number of matches were set up or won by the efforts of the bowlers. There were a number of outstanding individual performances from bowlers, but this is a list of the best bowlers throughout the year. Shiamak Unwalla picks the 10 best bowlers of 2015. NOTE: This is not necessarily the leading wicket-takers of the year, but bowlers who were most consistent and impactful. That said, most of the leading wicket-takers will feature in this list anyway. The players are arranged in descending order of wickets taken. READ: Yearender 2015: Top 10 most thrilling ODIs

1. Ravichandran Ashwin: The leading wicket-taker of the year, Ashwin was absolutely lethal in the 9 Tests he played. To be fair, he was helped by the fact that 8 of these were played in the subcontinent. He finished the year with 62 wickets at a measly 17.2 and a strike rate of just 36.4. He took 7 five-wicket hauls and 2 ten-wicket hauls as well. He helped India to leapfrog to the No. 2 spot in Tests according to the ICC rankings. His spell of 7 for 66 against South Africa at Nagpur was an exhibition of unrelenting accuracy and skill.

2. Stuart Broad: One of the most successful pace bowlers of the year, Broad was excellent across countries this year. His dream spell of 8 for 15 against Australia at Trent Bridge was the deadliest display of seam bowling seen in ages. With 51 wickets in 12 matches at 25.09, Broad was the second-best bowler of the year.

3. Josh Hazlewood: If a bowler is good enough to be compared to Glenn McGrath, there must be something special about him. Hazlewood proved his worth in Test cricket with some accurate, consistent swing bowling. In 11 Tests he took 51 wickets at a paltry 21.6. He enjoyed a fantastic strike rate as well, picking up a wicket every 42.6 balls he bowled. Hazlewood showed the ability to be consistent while simultaneously getting breakthroughs for Australia. READ:

4. Yasir Shah: Few bowlers have impacted their teams’ fortunes as much as Yasir has done for Pakistan. Yasir is still a fledgling in Test cricket, but he already established himself as their main strike bowler. Having made his Test debut only at 28, he is making up for lost time now. He was excellent this year as well, taking 49 wickets in 7 Tests at 23 with 3 five-fors. He missed out on the title of ‘Best Spinner of the year’ to Ashwin, but he was a close second. READ: Yearender 2015: Top 10 debut performances across formats

5. James Anderson: Broad had more wickets, but there is no question that Anderson was the better bowler on display. That Anderson was lethal in England comes as no surprise, but what stood out was his performance in UAE against Pakistan. On the lifeless tracks of UAE Anderson bowled with extraordinary discipline and averaged a mind-numbing 15.61. Overall, he took 46 wickets in 11 matches at 22.65 with two five-wicket hauls.

6. Mitchell Starc: Though he had a sensational year in ODIs, Starc was not quite as effective as he ought to have been in Tests. That is not to say he was not good; 46 wickets in 11 matches at 25.06 and a strike rate of 44.7 with two five-fors is an excellent haul. However, he was largely ineffective in England, and while he was always quick — he bowled the fastest ball ever recorded in Test cricket — he was unable to swing the red (or pink) ball quite like the white one.

7. Nathan Lyon: Lyon is one bowler who consistently bowls within himself and manages to keep opposition batsmen in check. He had another productive year in 2015, taking 41 wickets at 29.95 in 12 Tests. He has not been outstanding like Ashwin or Yasir, but has performed his role in the Australian team admirably.

8. Dhammika Prasad: That Prasad makes the list of leading wicket-takers in 2015 despite having played almost exclusively in Sri Lanka is a testament to how well he has bowled this year. In only 9 Tests he took 41 wickets at 24.95 and a strike rate of 44.3; these are excellent numbers by any stretch. He bowled with fire on pitches which offered him little assistance, and was Sri Lanka’s best bowler by a long margin.

9. Ravindra Jadeja: Though he played a measly 4 Tests in 2015, Jadeja’s monumental performance makes it impossible to deny him a slot in the list of best bowlers of the year. He did not play for India till the South Africans visited, but made up for lost time by taking 23 wickets at an insane 10.82, a strike rate of 36.7, and an economy rate of 1.76. Despite the criticism faced by the surfaces in India for being too spin-friendly, the fact remains that Jadeja was impossible to get away by anyone barring AB de Villiers. Had he played more Tests he would probably have had similar success. READ: Yearender 2015: Top 10 emerging players

10. Amit Mishra: Another bowled who did not get to play too many Tests, Mishra was consistently brilliant in every match he played. He took 22 wickets in the 5 matches he played in, enjoying an average of 15.72 and a strike rate of 33.2. Despite these numbers he continues to be India’s third-choice spinner behind Ashwin and Jadeja, which says a lot about how well they bowled. 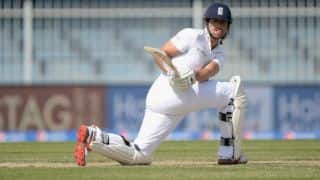 South Africa vs England 2015-16: Visitors have a great chance to beat hosts in their own den