2015 Yearender: Cricketers who bid adieu to the sport this year

2015 Yearender: Cricketers who bid adieu to the sport this year

Here is a list of Top 10 most note-worthy retirements of the year 2015.

This year saw many of the biggest names in international cricket such as batting legends, meticulous bowlers, and work horses bidding adieu to their beloved game in one format or the other. Here’s Vishal Mehra listing down the Top 10 most note-worthy retirements of the year 2015.

From singing songs in the middle of the pitch to having a laugh with the umpires on the ground, Virender Sehwag has done it all. Sehwag, single headedly changed the way Test cricket was played since arriving on to the scene in 2001. It was no looking back for the ‘Nawab of Najafgarh’, as he accomplished feats no other Indian batsmen had even thought of. From scoring first ever triple century in Test cricket for India to recording the fastest-ever ODI hundredIndia for his country, he has ticked everything off the check list. Sehwag also played a crucial part in India’s ICC Cricket World Cup 011 victory, amassing 380 runs. In 104 Tests, Sehwag made 8,586 runs at an average of 49.35, which included 23 hundreds of which two were triple centuries.

One of India’s best exponent of reverse swing, Zaheer had a wonderful start to his career in early 2000’s under the backing of Sourav Ganguly. Zaheer learnt the art of bowling from Javagal Srinath, and soon became the country’s bowling spearhead. After being side-lined due to bad form, Zaheer made a startling come-back into the team in 2007 and there was no looking back. He single-handed won India the Test at Trent Bridge against England to announce himself back on world stage. Zaheer was also a crucial part of the 2011 winning World Cup squad for India. Zaheer, in 92 Tests, took 311 wickets and 282 wickets 200 in One-day Internationals (ODIs).

Nothing better to sign off from cricket with a World Cup tacked inside the kitty. Michael Clarke, or fondly know as ‘Pup,’ did exactly that and brought an end to his illustrious career in ODIs as Australia won their fifth World Cup trophy this year. . His Test retirement, on the other hand, did not turned out to be as memorable as his team was very comprehensively beaten by England in the Ashes 2015 series. After taking over reigns from Ricky Ponting, Clarke led Australia to an Ashes whitewash in 2013-14 and ICC Cricket World Cup victory at home in early 2015. Clarke was always plagued with injuries throughout his playing days. For, Australia Clarke made 8,643 Test runs in 115 matches at an average of 49.10 with 28 hundreds to his name, whereas in ODIs he made 7,981 runs at 44.58 including 8 centuries in 245 appearances.

Kumar Sangakkara can easily be called as one of the statesmen of the game of cricket in the 21st Sangakkara was without doubt, Sri Lanka’s most consistent batsman in terms of scoring centuries and contributing to the team’s success. Sangakkara who had an inseparable bond with fellow countryman and legend in his own right Mahela Jayawardene, averaged a mind-crunching 57.41 in 134 Test making 12,400 runs with 38 hundreds, in an era comprising of greats like Sachin Tendulkar, Brian Lara and Ricky Ponting. Sangakkara was equally devastating in ODIs making 14,234 runs in 404 matches, he also remained unlucky in world cups missing out on the 2007 and 2011 edition. Not to be out-done Sangakkara did manage to get his hand on the ICC World T20 2014 against India making 52 runs.

One of the main stalwarts in the rise of Sri Lanka’s cricket, Mahela Jayawardene said goodbye to game post the ICC 2015 Cricket World Cup, much like his friend Kumar Sangakkara. Jayawardene could easily mould himself in any format of the game he played. An aggressive captain and great timer of the ball, Jayawardene spared no one. Fast bowlers and spinners were punished alike. Jayawardene, who had already retired in Tests, played 448 ODIs making 12,650 runs with 19 centuries to his name. His longevity can be gauged that he is second player after Sachin Tendulkar to cross 600 international matches. The testimony to his adaptability skills is that he scored the first T20 century by Sri Lankan in 2010 against Zimbabwe.

One of the most under-rated Test cricketers Shane Watson retired from longer format of the game after an injury forced him to cut a disastrous Ashes tour this year. Watson’s work ethics and his keen eye for controversies was always the talk of the town, he himself felt that his Test career could have been better if not for injuries and inconsistencies over his place in the team. Watson is more so remembered his opening batting spells in 2010 and 2011 for Australia, wining back-to-back Allan Border medals. Watson, since 2005, had played 59 Tests, scoring 3,731 runs at 35.19 ended up picking up only 75 wickets. Watson continues to try to win his place back in ODI squad.

Mitchell Johnson is by far one of the scariest fast bowlers seen in past few decades. His intimidating and intimate bowling spells have wrecked havoc on batsmen in almost every nook and corner of cricketing world. Johnson remained one of the the most heavily-debated personalities across teams during any Ashes series. From being abused during the 2010-11 Ashes defeat, the injury he suffered in 2011 gave him a chance to rejuvenise. Being left out of the 2013 tour to England provided him more time to find his groove, and he rammed England in the 2013-14 Ashes series at home, taking 37 wickets at 13.97. Johnson picked 313 wickets from 73 Tests and 239 from 153 ODIs, apart from being a World Cup winner in 2007 and in 2015. ALSO READ: 2015 Yearender: Top 10 ODI spells

New Zealand’s most experienced cricketer in Tests and ODIs, Daniel Vettori finally hung up his boots after a memorable ICC Cricket World Cup 2015, with New Zealand losing in the final. Vettori, who started his career way back aged 18, has now retired from all formats after cementing his place in history as one of the most successful spinners in world. Vettori is New Zealand’s leading wicket-taker in ODIs with 302 scalps in 291 matches and second in Tests, snaffling 362 wickets at 34.36. Vettori was also no mug with the bat; he has 6 Test centuries to his name. He belongs to a small community of players who played the game with spectacles.

Pakistan’s war-horse Younis Khan’s abrupt retirement from ODIs shocked everyone during the course of 5-match ODI series against England. If not for internal politics in Pakistan Cricket Board (PCB), Younis could have played much more than he has. Younis, in 265 ODIs for Pakistan, made 7,249 runs at 31.24, including 7 centuries and 48 half-centuries in the process. His constant fight for a place in the team, some say, eventually lead to him retiring at such a stage that where Pakistan needed him the most to nurture future batsmen.

Perhaps one of New Zealand’s most devastating batsmen in the modern era, Brendon McCullum announced his retirement from international cricket late into the 2015. McCullum was always known for his abililty to change the game on it heads and destroy bowlers all around the world. McCullum successfully lead New Zealand to the final of the ICC Cricket World Cup 2015, which his team lost against Australia. McCullum’s contribution to the game of cricket can be judged by the fact that he played his 99th consecutive Test last week against Sri Lanka. He is also co-holder of the world record of 100 Test sixes with Australian Adam Gilchrist.

Steve Davis: As much as players are important, an umpire plays a pivotal part keeping the sanity of game of the cricket. Umpire Steve Davis, aged 63, officiated in 57 Tests, 137 ODIs, and 26 T20Is in a career that spanning 23 years from 1992. Davis was also one of the officials that were caught in the attack on the Sri Lanka cricket team by terrorists Lahore, Pakistan. 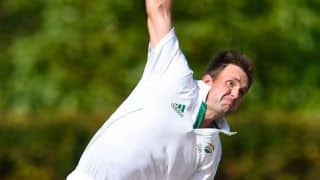 Hardus Viljoen called in as cover for Kyle Abbott for South Africa vs England, 2nd Test at Cape Town