During India s ODI leg of the Australia tour, stand-in opener Rohit Sharma s statement that MS Dhoni is the ideal No.4 for India going in to the World Cup stirred things up. This despite the fact that the Indian team management had put their weight behind Ambati Rayudu, for the crucial two down position, in recent times. (ALSO READ: What is India’s ideal XI for the 2019 ICC Cricket World Cup?)

During the series, Rayudu batted at No.4 for the first two ODIs – scoring 0 and 24 – before being rested for the 3rd ODI, while Dhoni batted at No.5 in all three matches scoring 51, 55* and 87*. (READ MORE: Things are more or less running in auto mode for us: Kohli)

And ahead of the New Zealand ODI series skipper Virat Kohli also said that the No 4 spot needed to be solidified , putting in doubt Rayudu s place in the XI. (ALSO READ: Wellington win will have a keen bearing on India s World Cup squad)

However, the 33-year-old seemed to have heard his captain and with 190 runs in five matches against the Black Caps – the highest in the series – has all but solidified the place. (ALSO READ: Ambati Rayudu, Dinesh Karthik haven t done justice to their repeated opportunities)

On Monday, after India sealed the series with two games to spare in a match in which Rayudu scored 40 not out from 42 balls, Kohli said that things were more or less running on auto-pilot mode for India ahead of the World Cup.

And his valiant effort in the fifth ODI in which he scored 90 off 113 balls, coming in to bat when India were reeling 12/2 and then found themselves staring down the barrel at 18/4, showed that Rayudu has the ability to soak in the pressure when needed and build an innings.

On the contrary, Dhoni did not get to bat in the first ODI and injury ruled him out for two more games in the series. He made 48* and 1 in the series, further helping Rayudu’s cause. With five more ODIs left before the World Cup – against Australia at home – and the Indian Premier League, it would be foolish on Indian team management s part still have Rayudu in an unsettled frame of mind with regards to his place in the XI.

So then, it this India s likely XI for their World Cup opener versus South Africa come June 5 at Southampton? 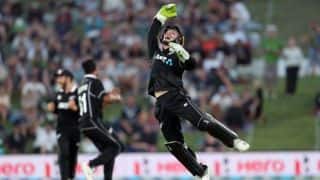