42 all out: The story of India’s lowest recorded total in Tests

42 all out: The story of India’s lowest recorded total in Tests

On June 24, 1974, India were bowled out for a humiliating 42 at Lord’s. Abhishek Mukherjee looks back at India’s all-time lowest Test score.

The reprehensible defeats of the Indian teams of the ’50s and ’60s had made the contests lop-sided in the foreign territory even before the first ball was bowled. Come late ’60s and the ’70s and the Indian team looked to have a formula to beat the best in their own den. The New Zealand series win was India’s first ever away win. The twin series wins against West Indies and England in 1971 made Indians world beaters. Those were the halcyon days of Indian spin quartet and the resourceful classy batsmen had the propensity to rise to the occasion.

Come summer of 1974 and the hopes dashed.

We all knew about it when we grew up. The plunge of Indian cricket from hitherto unknown heights to an abyss so cavernous that it took away all the glory that had been built up over the past three years, thanks to the advent of some talents and at the cost of sweat and hard toil.

The summer came and went away, and left India dead and buried, and took away their captain as it ended. Three years of world domination was ruined in a span of a month.

The nadir, though, was reached on the morning of June 24. Let us go back to that fateful day.

India had arrived in England as one of the best teams in Test cricket — if not the best. They had beaten England at home and away after their undefeated three-year streak. They had also managed to defeat West Indies at their den. When they toured England in 1974 under Ajit Wadekar they were probably the favourites going into the series.

India lost the first Test at on a wet, green Old Trafford pitch despite Sunil Gavaskar’s long-awaited hundred — the first since his maiden tour — and a quality all-round show from Syed Abid Ali. The 113-run defeat on a seamer-friendly track did not look that bad — India, after all, were nowhere close to England in terms of a seam attack.

The two teams then proceeded to Lord’s for the second Test — the one that would shatter India’s confidence to beyond repair.

Mike Denness won the toss, and Dennis Amiss and the debutant David Lloyd, who was preferred to Boycott,  went about plundering runs without much fuss. India’s sole success on Day One came when Lloyd was caught by Eknath Solkar off EAS Prasanna. That apart, everything went against India: England ended the day at 334 for 1 with Amiss (187) and John Edrich (93) unbeaten. India had virtually been batted out of the Test.

India struck back with two quick wickets within 5 runs — those of Amiss (188) and Edrich (96). When Bishan Bedi accounted for Keith Fletcher at 369 India seemed to be clawing back into the Test. Denness and Tony Greig, however, took the matter in their hands, and both batsmen hammered centuries to compound India’s problems further.

It did not help that Bhagwat Chandrasekhar — the man who had routed England at The Oval three years back to give India their first victory on English soil — could bowl only 9.3 overs due to a broken finger.

England were eventually bowled out for 629. Bedi and Prasanna toiled hard: Bedi’s 6 wickets had cost him 226 runs while Prasanna’s 2 came for 166.

Gavaskar and Farokh Engineer looked unperturbed on the second afternoon. They batted with confidence on a track that still played true, and reached 51 without loss at stumps with Gavaskar on 17 and Engineer on 33. They had seemed completely at ease against the three-pronged seam attack of Geoff Arnold (a last-minute draft-in after Bob Willis pulled out of the Test), Chris Old, and Mike Hendrick.

India began with unexpected aggression on the sun-baked third morning. Even Gavaskar did not hesitate to take risks, and the wicket seemed so flat that a draw seemed the only conceivable result. The Ladbrokes tent at the Nursery end offered odds of 6-4 for a draw, and the spectators prepared themselves for a run-fest.

Gavaskar was caught-behind off Old just before lunch with the score on 131, but that did not seem to bother the Indians too much. Wadekar looked composed, and despite Engineer’s departure for 86 just after lunch he batted serenely with Gundappa Viswanath.

There were a couple of quick wickets, and soon the dark shadows of a follow-on loomed in the horizon. Viswanath batted well for his 52 — adding 62 with Solkar for the fourth wicket — but after he fell India were bowled out for 302 thanks to some reckless shots. They were 183 for 2 at one point of time just before stumps on Day Three. John Woodcock wrote: “There was something reckless about the way several got out. I am all for adventure by that has to be tempered by judgment.”

Old was the wrecker-in-chief with 4 for 67 while Hendrick picked up 3 for 46.With a lead of 327 Denness asked India to follow-on.

India finished Day Three on 2 without loss after batting for 2 overs. Denness later said “On Sunday [the rest day] I thought we were only halfway through this fight. I certainly never expected anything like this.”

Monday morning was different, though. The conditions were overcast and humid, and the pitch looked somewhat different as well. As Arnold later said: “The ball didn’t do as much in the air as everybody thought, but it certainly went off the pitch; Obviously what happened was that it had sweated under the covers overnight and greened up just enough to give the ball the sort of purchase I needed. It was amazing really. Just one of those days.”

Arnold started the day with two massive outswingers, and then brought back the third one sharply to hit Engineer on the pad as he played forward and India were 2 for 1. The decision was dubious, though. Gavaskar recollected: “Farokh stands a fair bit outside the batting crease and then he had stretched forward, so it must have required tremendous eyesight to give him out. Later Farokh claimed that he had even a faint edge.”

Wadekar was cleaned up Old shortly, and then Viswanath edged one off Arnold that wicket-keeper Alan Knott took in front of first slip. 12 for 3 soon became 14 for 4 as lifter from Arnold brushed Brijesh Patel’s gloves and flew to Knott. Solkar walked out.

Old soon greeted Solkar with a vicious bouncer. Solkar tried to hook but the ball hit his head. Old tried an encore, but this time the hook connected and the ball flew for six. Then, to quote Gavaskar, “Solkar came down the wicket to ask me to stay and help him save the game.” Even the particularly vocal Indian supporters at the Mound Stand seemed hopeful as long as Gavaskar stayed.

That was not to happen. Arnold swung one in sharply and Gavaskar’s 49-minute resistance ended. India were 25 for 5. Back in India, sports journalist Partab Ramchand — tired after a night shift — had dozed off while listening to BBC on his transistor; when he woke up after about half an hour he was in for a shock.

In his own words, “I heard the commentator say ‘and that makes India 25 for 5’. Disbelieving what I had just heard, I rubbed my eyes and cleaned my ears. But I was already awake and there was nothing wrong with my hearing. For the commentator repeated the score and said that Abid Ali was walking out to join Solkar. Abid Ali? Solkar? Whatever had happened to Gavaskar, Engineer, Wadekar, Viswanath, and Patel inside little more than half an hour? Well, actually they had all been out.”

Gavaskar was surprised as well. As he recollected later, “by the time I had removed my leg-guards Madan and Abid Ali had joined me in the pavilion.” Abid Ali was caught behind off Old and Madan Lal was caught by Hendrick in the same over. 30 for 7.

Prasanna hung around for 15 minutes as Solkar played a few strokes adding 12 for the eighth wicket. Then, in the penultimate ball of the 17th over Old ran through Prasanna’s defence, and flattened Bedi’s stumps the next ball. Chandra did not make a pointless appearance, and India were bowled out for 42 in 17 overs in 77 minutes. Solkar was left stranded on a 17-ball 18, that included a six and 2 fours.

The match was over by 12.39. The public, agitated at the match being over in just over an hour, was agitated and targeted the MCC Secretary Jack Bailey, who said later: “We are always sorry when a match finishes early. We tried it [an exhibition match between the two teams after the Test got over] some years ago and it was found the cricket was so anticlimactic that neither the crowd nor spectators found it entertaining”.

It was India’s all-time lowest score. The 102 balls they faced were the lowest in an all-out innings since World War II.

Comparing the collapse to the 1952 debacles, Mihir Bose wrote, “The Indian collapsed like they had never done before, not even against [Fred] Trueman.”

Wisden was harsher as it called India’s batting “too weak and brittle to be able to hold its own at international level.”

As the heroes — Arnold (4 for 19) and Old (5 for 21) posed for photographs on the pavilion — Wadekar made the Indians practice at the Nursery End for almost throughout the day.

– The Indian agony was far from over. There was a misunderstanding when the Indian team reached the High Commissioner’s place for a dinner; Wadekar and the entire team was asked to leave.

– Sudhir Naik was accused of shoplifting.

– India were blown away at Edgbaston: they were bowled out for 165 and 216 as England declared at 459 for 2, winning by an innings again (Naik, to his credit, scored 77 in the second innings).

– Wadekar was fired: he never played a Test again. The Victory Bat that was erected at Indore three years back was defaced. 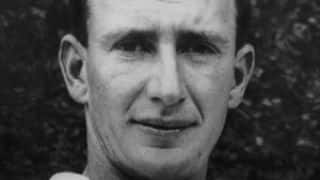