4th Test: Will Ageas Bowl be the scene of history for England’s James Anderson?

4th Test: Will Ageas Bowl be the scene of history for England’s James Anderson?

Anderson has an England-record 557 wickets in Tests and is now just six shy of Glenn McGrath's mark of 563 - the most taken by a pace bowler at this level.

England s record-breaking pace spearhead James Anderson is on the verge of becoming the most successful pace bowler in the history of Test cricket.

With 557 Test wickets, the 36-year-old is seven short of moving past Australian icon Glenn McGrath s mark of 563, the most taken by a pace bowler in Test cricket. In his own words, McGrath is the greatest fast bowler there has ever been and as he heads into the fourth Test against India at The Ageas Bowl in Southampton, starting Thursday, Anderson will have plenty of attention each time he runs in to deliver the ball.

Age has not slowed down Anderson, who in 2017 took 55 wickets in 11 Tests to cap his most productive year in whites. In eight Test matches in 2018, Anderson has 35 wickets at an average of 19.45 and was recently named No 1 Test bowler for the second time this year, with a career-high 903 ratings points.

During the second Test against India at Lord s, Anderson became the first bowler to take 100 wickets at the hallowed venue. He should have closed the gap on McGrath at Trent Bridge, but dropped catches left him fuming.

As a match-winner, Anderson is unparalleled for an English cricketer. Just consider the statistics: in over 13 years of Test cricket, Anderson has run in and bowled more than 5177 overs, claiming 26 five-wicket hauls and three of ten in a match. Eighteen of those 26 five-fors and all three of his ten-wicket bags have come in matches that England have won; additionally, three five-fors have been in draws.

Truly, Anderson is something resembling a superhuman. Injuries have taken a toll on his body, which to his credit is remarkably agile; he often fields at gully and cover-point in Tests, and at Trent Bridge nearly pulled off a leaping, one-handed stunner. Smartly, after a recurrence of a longstanding shoulder injury earlier this summer, Anderson took a month off to recuperate – and the returns have been excellent: 17 wickets in three Tests against India, at 14.88 and at a strike-rate of 39.2.

Anderson is not a man for personal milestones, as he has admitted during his record-setting Test career. Ahead of the Test series opener with India at Edgbaston, he said that being so close to McGrath was a bit surreal .

He is 36, and since the start of 2016 has averaged 20 per every 316 Test wicket he s claimed in 31 games. England s next Test assignment is a tour of Sri Lanka in the winer, followed by a trip to the West Indies in 2019. There have been calls to rest Anderson for the Sri Lanka tour, keeping in mind the need to manage his workload. The 2019 Ashes loom, and given how well he bowled in Australia during the chastening tour there either side of the new year, there is every reason to believe that Anderson can be in prime form when Australia come calling.

Trevor Bayliss, England s coach, believes that Anderson can bowl at Test level even at the age of 40. That would mean that Anderson will be an active international cricket in 2022. It looks a long shot, but then this is the man that has smashed conceptions all through his historic career – so who s to say it won t be possible if Anderson keeps on taking wickets? 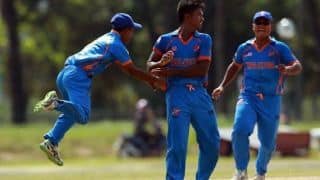