Dale Steyn, born June 27, 1983, is perhaps the best fast bowler of the new century. Steyn brings together, pace, movement and aggression to provide a package of the complete fast bowler

Dale Steyn, born June 27, 1983, is perhaps the best fast bowler of the new century. Steyn brings together, pace, movement and aggression to provide a package of the complete fast bowler. Many a batsmen have fallen prey to his skill on the field of play, with some of the best made to look ordinary. On the occasion of Steyn s 34th birthday, Nishad Pai Vaidya picks 10 deliveries that signify the craft of the South African speedster.

Michael Clarke owned the year 2012. Leading up to the third Test against South Africa at Perth, Clarke had four doubles that year two of which came in the first two Tests against the Proteas. In the series decider, Australia bowled South Africa out for 225 but then ran into an in-form Steyn. He reduced them to 45 for five, with Clarke trying to chart a recovery. However, the best batsman in Test cricket at the time was undone by a pacy delivery that pitched on middle and swung a little to square him up. Steyn got the edge as the ball tore through Clarke and went into the gloves of AB de Villiers. To do that to a batsman with back-to-back doubles reflected the crafty fire with which Steyn hurled those deliveries.

On a batting beauty at Nagpur in 2010, South Africa piled 558 for six with Hasim Amla smashing an unbeaten 253. Considering the nature of the wicket, most expected India to bat it out for a dull draw, but Steyn s skills were just too good even on a placid track. This performance shows that true class succeeds irrespective of the surface. India were 40 for two when Steyn got rid of Murali Vijay and in came Sachin Tendulkar to take on the South African spearhead. During Tendulkar s 25-minute stay, the two had a great contest. Steyn had him playing and missing a couple of times, foxing him with deliveries that moved in and then others that moved away. On his part, Tendulkar drove one handsomely down the ground for four. Steyn then got one to pitch on off and it swung away from Tendulkar, who poked at it and feathered it to the wicketkeeper. This bout between the two is still talked about, along with the one they had in Cape Town in 2011. Steyn finished this innings with seven for 51.

3. Announcing himself to the world by outsmarting Michael Vaughan South Africa vs England, 1st Test at Port Elizabeth, 2004

With Shaun Pollock and Makhaya Ntini forming the core of South Africa s pace attack, a third spot remained up for grabs. When England arrived in South Africa in 2004, the home side introduced Steyn, who had the experience of playing only seven First-Class games. In his first Test, he showed that he could bowl with pace and get movement. However, it was in the second innings when the world took notice of this youngster. England were chasing a paltry 142 to victory and were given a scare when skipper Michael Vaughan was dismissed with the score reading 50 for three. Steyn got this ball to pitch around middle and off as it shaped enough to take the off-stump. Vaughan was squared-up and clueless about that delivery.

While Tendulkar dealt with Steyn s fire with his mastery, his teammates at the other end were engulfed by swing and pace. Cheteshwar Pujara, the youngster, had made quite a name in domestic cricket and on Test debut against Australia. However, during the third Test at Cape Town in 2011, he found out what international cricket is about. Steyn was in the midst of a dream spell to Tendulkar, but Pujara bore the brunt of a fast delivery, which pitched on leg-stump and straightened to hit his back-leg in front of the middle-stump. Pujara had his bat down very straight and had watched it, but Steyn was too fast for the rookie.

In the third Test at Durban in 2008, South Africa were moving towards at innings victory over the West Indies, with only Marlon Samuels standing in the way with a fighting ton. But on this occasion, Steyn pitched it on a good length around off-stump. The ball meandered slightly towards the off-stump. Samuels was beaten and found his woodwork shattered.

When compared to most of the other deliveries in this list, this one is different as it was an inswinger. Ian Bell was fighting hard with England at 133 for five in the first innings of the fourth Test at Johannesburg. Steyn normally relies on outswingers to get rid of right-handers, but this time, he got the ball to move in. After bowling a barrage of outswingers, Steyn got this one to pitch outside the off-stump and tilt it into the batsman. Bell was beaten as the ball hit the middle-stump. Evidently, he was expecting another outswinger.

The South African speedsters made merry on the first day of the second Test at Ahmedabad as the green track gave them enough help. India were in tatters after Nitini s early spell. At 53 for four, Rahul Dravid was their big hope. Taking a leg-stump guard, he readied himself to face Steyn. Dravid was the man for the job and considering the fact that he had scored a ton in the previous Test, India desperately needed that typical knock from him. It was Steyn s day though as he squared Dravid up with a delivery that moved a touch away and hit the off-stump. The Wall had been breached! India were bundled out for only 76 with Steyn taking a fifer.

8. Prodigious movement like no other South Africa vs India, 3rd Test at Cape Town, 2011

This ball was a peach, but was unlucky not to produce a wicket. Harbhajan Singh, a competent batsman was on strike, but it was good enough to fox the best in business. Steyn pitched this up, around middle-stump and it copiously swung away from Harbhajan. As some of the other batsmen, he too was squared-up and as it went past him and into Mark Boucher s gloves, there was a woody sound. The Proteas appealed but the umpire turned it down. Replays showed that it had missed Harbhajan Singh s outside edge and had in fact deflected off the off-stump. The bails were unmoved. 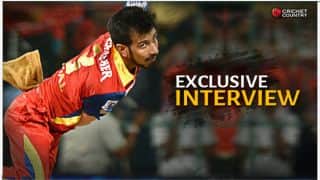