Gayle believes in living life to the full and his positive energy is totally refreshing.

Chris Gayle is quite a character on and off the field. He has an omnipresent smile, full of good-natured mischief. Gayle believes in living life to the full and his positive energy is totally refreshing. Whether he is belting sixes at will, celebrating a wicket, or doing the Gangnam dance or making funny gestures behind a player interviewed on television, Gayle is the heartthrob of the cricketing world.

One only needs to look at his fan following to appreciate why he is the king of social media. And he is like an open book be it charming women, enjoying his drinks or having blast with friends. There is not even a semblance of hypocrisy in the Jamaican. He is a character who lives his life on his own terms. And he likes to fancy himself as “Universe Boss.” And why not!

Abhishek Kumar showcases 10 videos that show why Gayle is one of a kind in world cricket:

2. Chris Gayle shows how a routine shower can be made enjoyable!

4. Showstopper at the ‘ramp walk’!

Pt2: had to close the show!! Man with many talents!!! Don’t be bias, I shell the stage the 1st time that they had to call me up a 2nd time – @triplecenturysports u beauty!! #WorldBoss #AYahSoNice #UnderMiFatThng

8. Gayle runs after Yuvraj Singh with a raised bat!

Prt1… My 1st time doing this sort of bowling and I was lucky to catch it on camera, (((STRIKE))) 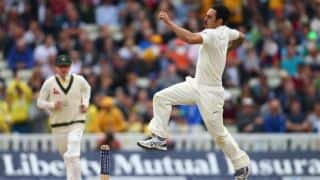