Allan Border and John Larroquette
By

Former Australian cricketer, Allan Border, who has played 156 Tests and 273 One-Day Internationals (ODIs) in his long illustrious career. A left-hander, Border was amongst the most popular cricketers and a prolific run-scorer. He has 11,174 runs in Test cricket, while he has scored 6524 runs in ODI cricket. He was bowled left-arm orthodox, picking up 39 wickets in Test and 73 in ODI cricket.

Border is considered as one of Australia’s greatest captains and has led the nation to a World Cup triumph in 1987 and Ashes win in 1989, 1990-91 and 1993. Since 1996, the India-Australia Test series is named after him and Indian legend Sunil Gavaskar as it’s called ‘Border-Gavaskar trophy’. Cricket Australia also honours excellent performers of the year with the Allan Border Medal. He is part of the ICC Cricket Hall of Fame and has received several accolades of similar stature in Australia.

On the right is Border’s lookalike, John Larroquette, an American film, television and stage actor. For his role of Dan Fielding in the famous American sitcom Night Court, Larroquette won Emmy Awards four consecutive times between 1985 and 1988. He also had his own show, The John Larroquette Show which was aired on NBC network. Larroquette has been part of various American television shows like Boston Legal and CSI: NY. 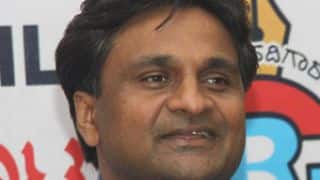