An cricket match was held between one-armed and one-legged Greenwich prisoners in 1796.

Cricket was in its nascent days in 1796. Let alone legalise over-arm bowling, the world had barely heard about the concept. However, the sport was immensely popular, and when the Annual Greenwich Pensioners Benefit Match was asked to feature a team of one-legged men (of pensioned sailors) taking on a one-armed one, the response was huge.

The teams pensioned sailors who satisfied the criterion mentioned above met at Aram s New Ground, Montpelier Gardens at Walworth the inner-city district of Southwark that is generally accepted as Charlie Chaplin s birthplace. The prize money of a thousand guineas was quite substantial.

Of course, there were logistic issues, given the standard of roads of the era (Richard Trevithick was yet to come up with his design), but one can assume that a thousand guineas was too big an amount to be ignored.

Day One: Fearn shines amidst riot

By 9 AM in the morning, people had started flowing in. The exact count is not obtainable, but Pierce Egan wrote in Sporting Anecdotes that an immense concourse of people assembled at the ground. The pitch was prepared, and the match commenced at 10 with the One-Legged side batting first.

The task was perhaps made easy by the fact that the bowling had to be underarm and the overs consisted of not more than 4 deliveries. Terry and Mudd took 5 wickets each, and the One-Legged were bowled out for 93. Batting at No. 7, Fearn top-scored with an unbeaten 30; Pullen, with 13, was the only other batsman to go past 10.

The One-Armed had their chance. During their innings, at about 3 PM, there was a commotion. Egan wrote: A scene of riot and confusion took place, owing to the populace to gain admittance to the ground: the gates were forced open, and several parts of the fencing were broken down, and a great number of persons having got upon the roof of a stable, the roof broke in, and several persons falling among the horses were taken out much bruised.

It took 3 hours for the game to resume, and shortly afterwards the One-Armed were bowled out for 41. Sheary, the No. 9 batsman, top-scored with 10. Fearn, on the other hand, had 6 wickets to his name. The One-Legged finished the day on 60 for 6, a formidable 112 runs ahead at stumps.

Times ran a report next day: Yesterday a curious match was played at Montpelier Gardens between 11 of the Greenwich [sailor] pensioners, wanting an arm each, against the same number of their fellow-sufferers with each a wooden leg.

When play resumed, the One-Legged extended their score to 104. Terry claimed 6 wickets, but as many as four of the One-Legged Pullen (27), Glassock (20), Brice (15), and Cooper (13) reached double figures. A target of 157 was too steep, and the One-Armed capitulated, once again against Fearn, who claimed 6 wickets. They scored only 53, of which 22 were extras, and nobody reached double-figures.

The early finish left some time in the day, so the one-legged ran a race for the crowd for prize money of 20 guineas. The competition was steep, and in the end the prize money was divided among the first 3. It was just another example of the courage of the indomitable men.

– There have been several other similar contests, mostly to raise money for injured sailors. The Guardian mentions a match from 1848 (yes, in WG Grace s birth year) at Priory Ground, Lewsham. The One-Armed XI scored 50 and 41 before bowling out the One-Legged XI for 32 and 44. It was one of many such contests.

– There was also a match played at Manchester in 1863 that featured a man who was nicknamed No-Legs . One can only guess. 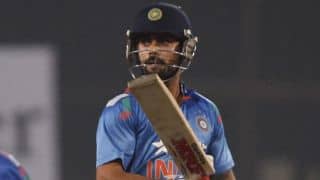