Australia are on verge of trailing once again in the Ashes the series after yet another poor performance with the bat in the second innings at Edgbaston.

Australia are on verge of trailing once again in the Ashes the series after yet another poor performance with the bat in the second innings at Edgbaston. It is two horrendous batting performances in consecutive days.  No doubt the execution and the application amongst the Australian batsmen has been poor but the plans derived and executed by the English bowlers have been exemplary.

Apart from the evergreen Chris Rogers, the rest of the Australian top order has been exposed to a certain plan in the first three Tests.
Starting at the top, David Warner has been starved off any cross-batted shots. The short ball has been used sparingly or used with three men on the leg side, effectively to restrict his boundary hits. England have forced Warner to drive and play with a vertical bat. While Warner is powerful driver, the way he executes the shot involves a punch rather than a flow of the bat. The swing through the air and James Anderson and Stuart Broad angle across him have made him play in an area that exposes his outside edge.

Steve Smith might have double hundred to his name in the series, but he should have been caught at 51 driving at a full ball in that marathon innings. Right from Cardiff, England have persisted with a line of sixth stump and relatively full. Only 9% of the balls bowled at him have been targeted at the stumps.  English bowlers have enticed him to cover drive off the front foot. While the shot is in Smith armoury, it is something he prefers not to play until he has crossed 30 or 40 odd. Even last year during his golden patch against India, out of his 75 boundaries only seven were through the covers. The only time Smith has been beaten has been on that length. England have worked on his patience. Given Smith dismissal in the second innings at Edgbaston, the tactic had clearly worked. He is looking for balls he can hit rather than waiting for them.

The English bowlers have seen Michael Clarke’s preference to stay off-side of the ball. Even the ball that yorked him in Edgbaston, Clarke was looking to stay outside the line of the ball.  Clarke is attempting to do this because he is aware of the short ball and the fact that due to his back issues he cannot duck under the short ball. This means Clarke is standing upright at the crease and his keenness to stay offside of the ball has meant he is not able to cover the line of the balls outside the off-stump.  Due to his upright stance the weight is not coming forward so full balls and him playing away from the body are resulting in his downfall. England have been wise enough to keep him guessing. Clarke is unware of what is coming at him and when. The modes of dismissal for Clarke in the series have varied form pulling a short ball, to push at wide balls outside to getting bowled by a yorker.

Adam Voges scoring areas through the leg side have been blocked. A midwicket, square-leg and a mid-on have been implemented, forcing Voges to play on the off side. He might be veteran of over 150 First-Class games, the nagging lines outside the off stump and then the straight ball into his stumps are what England bowlers have focused on all series. Because Voges has been aware of the inswinger, he has nibbled at balls outside off-stump. The low bounce has meant the length ball he is accustomed to leaving at the WACA, he is suddenly made to play at them.  Voges might not play the next two Tests but England have worked him out perfectly.

Mitchell Marsh is relatively new to Test cricket, but England have worked him out quickly. They have persisted with the back of the length balls slightly wide of off stump before either bowling a really full ball coming back into him or just leaving him.  Marsh lack of front movement has made him a sitting duck.

Overall England have executed brilliantly. If Ian Bell had taken that catch of Smith, we might be also be talking about Smith’s lack of runs.  Australian know the plans it’s now up to the batsmen to fight them. England will persist with pitches with movement and as Chris Rogers said “we just need to find a way”.

Captain Cook cannot be blamed for England’s travails; even Warne is in agreement!

Mitchell Starc and Mitchell Johnson are together a double-edged sword 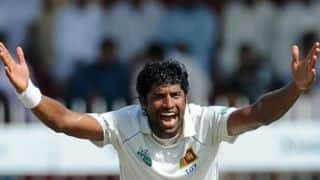 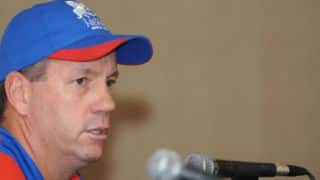