A whiff of cricket on the London Tube

A whiff of cricket on the London Tube

When the early Ashes sides used to leave the St Pancras Station on the boat train to Dover, there used to be crowd spilling out into the streets. Every piece of print bearing the tidings of the progress of the men Down Under used to be awaited with bated breath, devoured by hungry eyes.

Travelling on the London Tube, Arunabha Sengupta is delighted to come across a whiff of cricket.

The newspapers are there, either being glanced at by the busy commuter, or carelessly thrown in an abandoned corner of the vehicle after the casual flip-through.

They are laced with scandals and slander, murder and mayhem sex, lies and all the sleaze that entice the common eyeball.

With an effort, one can glimpse a page or more of sports, but football dominates all. And rugby. But, even with The Ashes about to get underway one has to look at the really small space-fillers to come across anything on cricket. On the London tube.

What has the world come to?

When the early Ashes sides used to leave the St Pancras Station on the boat train to Dover, there used to be crowd spilling out into the streets. Every piece of print bearing the tidings of the progress of the men Down Under used to be awaited with bated breath, devoured by hungry eyes.

It is a different world now.

And so I reflect, how the epicentre of cricket has shifted and all those curious thoughts that flit through the soul of a cricket romantic. How the game is celebrated in a different, crazy manner in the subcontinent and that too truncated versions of the game.

The train reaches Victoria Station and I get off. I end up almost carried by the rushing office crowd up the escalator to the turnstiles. Cricketing contemplation, or any sort of contemplation, is quite futile on a weekday morning in this frenzied city.

Yet, as I swipe my Oyster Card and come out of the turnstiles the singular sight delights the cockles of my heart.

A young employee of the London Underground, in the jacket of the Tube staff, does his duty of helping passengers with queries just outside the entrance. In his hand he holds one of those batons those table-tennis-racket-shaped signalling devices that guide the drivers of the trains and sometimes the passengers.

And as the rushing office crowd gallop to their destinations, this young man is in a world of his own. He holds the baton with both his hands. One can almost see the imaginary bowler steaming in from amidst the horde of commuters. And the front foot of the man moves forward the baton comes down in a classy downswing, and the elegant flick is executed towards the entrance of the District and Circle lines, roughly in the direction between mid-on and mid-wicket.

This done, the youth pauses to see whether there is any query from passing customers. There is none. So he braces to face the next imaginary ball. And this time he goes back and delicately cuts it late, between the slip and the crouching gully and thousands of rushing feet, towards the exit towards the National Rail Services.

And my faith in the journey of humanity and cricket is restored.

The tabloids may include only miniature paragraphs on the noble game; football, rugby, sensation and scandals may dominate the news. But with men such as this excellent employee of the London Underground, there is still reason for hope in this world. 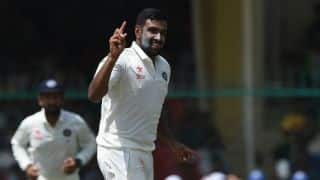 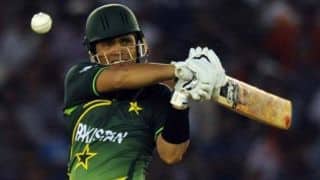