Aaqib Javed represented Pakistan on 185 occasions, taking over 230 wickets in a ten-year playing career, the highlight being the key role he played in Pakistan’s 1992 World Cup victory, where he opened the bowling and took key wickets throughout the tournament.

He has pursued a coaching career since retiring in 2003, taking up a number of roles in the Pakistan’s national set-up. He was appointed chief coach of the Pakistan National Cricket Academy (PNCA) in 2007 and went onto coach the Pakistan Under-19s and Pakistan ‘A’ sides. The 41-year-old has also been assistant coach for the Pakistan national team, and left his position of Pakistan bowling coach to take over as United Arab Emirates’ (UAE) head coach in March 2012, experiencing significant success after seeing his side qualify for three World Cups.

PakPassion.net caught up with the current UAE head coach about his approach to coaching, the current crop of Pakistani fast bowlers, Pakistan’s appointment of coaches and his thoughts on Pakistan’s chances in the upcoming ICC World T20 2014.

PakPassion.net (PP): You have been the UAE coach for almost two years now, successfully getting the UAE side to qualify for big competitions, namely the ongoing Under-19 World Cup 2014, the World T20 in March and the ICC World Cup 2015 next year. How have you developed your skills as a coach?

Aaqib Javed (AJ): I’ve been involved with coaching for the last 12 years. I was the coach of the Pakistan Under 19s side which won the 2004 World Cup as well as the Pakistan ‘A’ team. I was also chief coach at the PNCA so I had experience of handling coaching matters. I learnt that the head coach must create an environment, where everyone is comfortable and at the same time you must actually draw a pathway to certain targets.

When I took over, I gave the UAE team a pathway which was clearly going all the way to the World T20 and the 50-over World Cup. When I joined UAE as coach, people said I had the option of being the Pakistani bowling coach and instead had opted to take the position of UAE head doach, and they asked me what my targets were. I said there were three world cups coming up for the UAE and I wanted UAE to qualify for all three. Today, it has all happened and I think, I am very lucky that all three desires have come true. I’m a very satisfied person at the moment!

PP: How would you describe your coaching style?

AJ: My coaching style is always inspired through hard-work because when I took over the role of coaching UAE, there was no other option but to set an example myself. I used to run in front of all the guys and do gym training in order to guide and inspire them. Once you are training with them then they can’t complain about practicing too hard or experiencing hardship because you’re doing it all with them. They really appreciate that the coach is running and they then have to do it.

I’m still fit enough to bowl during training as well. I bowl two hours in the nets and always set an example that this is how you bowl out-swingers, this is how you bowl in-swingers and the variations. My style of coaching is to be physically involved in the training. Sometimes it’s really frustrating for the players when the coach is sitting in a chair and telling them to run ten laps of the ground or to do one or two hours of bowling and then do gym training; it makes a huge difference to them if the coach gets involved himself.

PP: Khurram Khan, the captain of the UAE, has indicated you are responsible for the change in fortunes of the side, specifically the shift in focus from reliance on spinners to fast bowlers. This must have been down to your Pakistani background?

AJ: When I joined the UAE team, they used to play with four spinners and one all-rounder and the all-rounder’s job was just to bowl four or five overs and that was it.

Before going to New Zealand for the ICC World Cup Qualifier, we were focused on getting four or five fast bowling options and we worked really hard on that. I think we surprised everyone because all of our opponents were working on the basis that we would be playing our spinners. When we went there and played the games they were waiting for our spinners and they were shocked that, in such a short period of time, we had created four or five good fast bowling options. You always have to prepare yourself for the coming challenges, so this is what we are trying to do.

PP: Speaking of fast bowlers, Pakistan recently tried a few young fast bowlers in the Test series against Sri Lanka. Have you had a chance to watch the new crop of Pakistani fast bowlers, namely Mohammad Talha, Rahat Ali and Bilawal Bhatti?

AJ: Talha could have been given a chance earlier because he played one game against Sri Lanka in Lahore about four or five years back, but never got another go. I think he was always a genuine Test bowler. He’s tall, he’s got good strong wrists and he’s got pace and natural out-swing. I still think he can serve Pakistan for four or five more years. Junaid Khan is there and Mohammad Irfan too so if all the fast bowlers are fit, I still think the Pakistani fast bowling line-up is one of the best.

Bilawal is good, he’s skiddy but he needs to learn a bit more variation, although he does have some. Because he’s skiddy and short, he can be very effective. He is very fit, so I think he can definitely serve Pakistan for a few years.

Rahat has limitations. He needs to work on a few more things, develop more variations like yorkers and reverse swing because Pakistan will mostly be playing in the UAE, where the pitches are flat and there is nothing for the fast bowlers on those surfaces. He can be very effective on seaming tracks, so you can select him for tours of New Zealand or England, but in the subcontinent or the UAE, I think you should go for tall bowlers like Mohammed Irfan, or ones who can consistently bowl over 140-145kph with reverse swing.

PP: You opted not to apply for the Pakistani head coach position when it was vacated upon the expiry of Dav Whatmore’s contract. What was the reason?

AJ: When I left Pakistan, it was always in my mind that I am going to the UAE. My family is here, my daughter is studying here and I opted to be the long-term coach of the UAE. I’m a professional coach and I don’t go for every opportunity. I think one should have his own clear thinking and mind on what he wants to do and achieve.

PP: What are your thoughts on the recent coaching appointments made by Pakistan?

AJ: As a person I have known Moin Khan [head coach] for a long-time. He is a very determined and committed person, but I don’t know about his experience of coaching — there are no short-cut in life. Moin can learn, he’s a smart guy and I think he can serve Pakistan, and I think he will put Pakistan on the right track.

I’m not sure about Zaheer Abbas as a cricket consultant, focusing on batting. You need energy and people who can work with the boys in the nets. The new trend of coaching is working closely and directly with the players and it’s physically demanding. There are a lot of throw-downs and a lot of bowling required. Life has moved on when it comes to coaching and with the new generation, fitness is very important as coach.

PP: You have served Pakistani cricket for many years, both as a player and coach. Will you have any divided loyalties if your UAE side meet Pakistan in the World Cup?

AJ: I’m a Pakistani but a coach is required to have two key attributes: to be hard-working and honest. When you are working with the UAE, you want the UAE to win and to be successful, there is no question about it.

PP: With the World T20 just around the corner, what are your thoughts on Pakistan’s chances?

AJ: In Twenty20 Internationals (T20Is), Pakistan always have a good team but I don’t know why they are still going back and selecting old horses. I believe T20 is a fast game, you need fresh players, fresh blood. If you look at other teams, they have clearly divided their different T20I, 50-over and Test match teams. I think Pakistan are still confused over which group of players can play T20Is, for One-Day Internationals (ODIs) and for Test matches. I think they definitely need fresh blood.

PP: Given the need for fresh blood, do you think Pakistan have made a mistake by recalling the likes of Kamran Akmal?

AJ: Most teams tend to select young players for their T20I squads but Pakistan have gone back to Kamran Akmal, who is over 30 and has been tried and tested over many years. Akmal can be very effective but T20 is a youngster’s game. You have to have a few effective senior players but the team should mainly be made up of youngsters who can field well and who can hit the ball a long distance. I think they should move on and pick some new guys instead of selecting Akmal again and again. 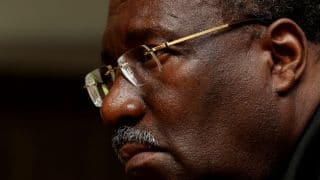