Finch is one of the most exciting batsmen in limited-overs cricket.

Aaron Finch, born on November 17, 1986, is one of the most exciting batsmen in limited-overs cricket. Finch has now cemented his spot in Australia s limited-overs setup. Nishad Pai Vaidya picks 10 facts you must know about the men who holds the record for the highest score in T20 Internationals.

1. Finch grew up in Victoria and was initially a wicketkeeper-batsman during his younger days. Like most youngsters in his country, he used to play Aussie-Rules football as well.

2. Finch was a part of the Australian squad at the ICC Under-19 World Cup 2006. He featured in that tournament alongside David Warner, his future opening partner in One-Day Internationals (ODIs) for Australia. UsmanKhawaja and MoisesHenriques, the future internationals, were also a part of the side.

4. Before his international days, Finch had already experienced the Indian Premier League (IPL). In 2010, he was a part of Shane Warne s Rajasthan Royals and played a solitary game for them.

5. Finch made his T20 International debut against England in January 2011. In his second game, he smashed 53 not out. However, he had to wait another year for an opportunity. He only cemented his spot in the side in 2013.

6. In 2011, Finch was picked by the Delhi Daredevils in the IPL auction. He stayed with them until 2012 before moving to the Pune Warriors India in 2013. Despite being a largely unknown player, he was appointed captain by Pune when Angelo Mathews failed. Finch was Pune s last captain in the IPL.

9. In 2014, Finch played for the Marylebone Cricket Club (MCC) against the Rest of the World XI at Lord s. He opened the batting with Sachin Tendulkar and batted with Brian Lara, Rahul Dravid and ShivnarineChanderpaul during his innings of 181 not out. Finch, who hasn t played a Test till date,and on that day at Lord sbatted with batsmen with a collective total of 52,846 Test runs.

10. In an interview with Cricket Australia s official website, Finch confessed to being nervous on the day and was embarrassed in the presence of the legends and felt like a schoolkid . He said, The thing I was most nervous about was running Tendulkar out. I thought, if I run him out, there was no chance I am getting out of this ground alive. In fact, when he was in his 60s, he contemplated getting out so that the crowd could watch some of the greats bat that day.

Andre Russell is no more an eligible bachelor! 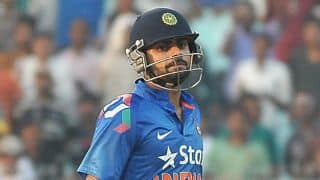