FInch's record in ODI wins in Australia underlines his value as a opener.

Australia‘s limited-overs captain Aaron Finch will on Saturday play his 100th ODI, as the five-match series with India gets underway in Hyderabad.

Finch, 32, will be the 29th Australian male cricketer to the milestone of 100 ODIs.

A day before the first game, here are Finch’s top five ODI innings:

Finch’s second ODI century came in a six-wicket victory in the series opener in Melbourne. Dropped on 8, he hit 12 fours in his 121 as Australia reached their target of 270 with 26 balls remaining. With David Warner he fashioned an opening stand of 163 in the first of five matches in the series. With this hundred, Finch became the first player from Victoria to score an ODI hundred at the Melbourne Cricket Ground.

Finch’s fourth ODI hundred of 2014 helped set up a 73-run win over South Africa at Manuka Oval in the third match of this five-match series, which put Australia ahead 2-1. Finch laid the spadework for a match-winning total of 329/5, hitting nine fours and three sixes in his first 50-plus score in 13 innings.

He let Warner go hard early on, and after getting a measure of the Canberra surface he opened up to produce a very fine hundred.

A year on, Finch again frustrated England at the MCG – in the 2015 ICC Cricket World Cup opener. This time around, with Australia batting first, he hit 12 fours and three sixes in his 135 to help the hosts post 342/9. Put into bat by Eoin Morgan, Australia put up a match-winning total fashioned largely by Finch, and won by 111 runs. Finch began strongly, reached his 50 off 52 balls and his century from 102.

His 135 was the fifth-highest World Cup score by an Australia batsman and the highest in a World Cup match held in Australia.

The 2015 World Cup semi-final between eventual winners Australia and defending champions India will mostly be remembered for Steve Smith’s twinkle-toed 105, but Finch was a valuable ally in a stand worth 182. No other Australian partnership reached 50 or lasted five overs.

It was not pretty – he played and missed and inside-edged several times – but it was testament to Finch’s big-match determination that he toughed it out.

In an Australia innings in which the next best score was 63, Finch’s 124 was instrumental in getting the visitors to 293/6. With Steve he added 154 for the second wicket to lift visions of 350, but India fought back brilliantly to take five wickets for 77 in Australia’s final 14 overs.

Finch’s 124 contained 12 fours and five sixes, a superb effort that unfortunately for Australia came in a lost cause as India won the series to become No 1. 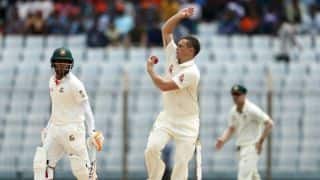