Greg Ritchie’s controversial remarks recently that had disgraceful racial overtones had come in for lots of criticism around the world along with censure from Cricket Australia. Arunabha Sengupta takes a look of such comments in history and covers the chequered non-cricketing career of the former Australian batsman. 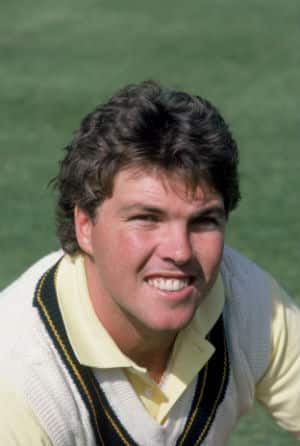 As a Channel Nine employee in 1994-95, Greg Ritchie (above) was so overjoyed when Steve Waugh scored a double hundred that he ran into the field to congratulate Waugh! But the batsman waved the maverick off with, “What are you doing out here, Fat Cat? © Getty Images

Greg Ritchie’s controversial remarks recently that had disgraceful racial overtones had come in for lots of criticism around the world along with censure from Cricket Australia. Arunabha Sengupta takes a look of such comments in history and covers the chequered non-cricketing career of the former Australian batsman.

—
Greg Ritchie hails from an era when cricket had no racism policy, match referees or even neutral umpires.
In January 2004, he was perhaps busy perfecting his infamous Mahatma Cote portrayal, with which he already stretched the boundaries of sensibilities and political correctness. So, he may have missed the action when Darren Lehmann was dismissed against Sri Lanka, walked into the Australian dressing room shouting, “Black c—ts.”, and was promptly banned for five One- Day Internationals.

Ritchie was probably at home using words such as “Kaffirs” to encourage his teammates as they quivered in their shoes before facing the West Indians in the early eighties. As long as he didn’t say it loud enough to provoke the kind of reaction that backfired on Tony Grieg’s infamous “grovel” word in 1976.
So he may now be surprised that Kepler Wessels has threatened to sue him. This happened after Ritchie, in one of his public speeches at the Gabba during the recent Test match between Australia and South Africa, shared an anecdote about his 1980s teammate. According to Ritchie, before a game against the West Indies, he had asked Wessels: “Hey Kepler, you’re not going to call this lot kaffirs today, are you?”

Two and a half decades after his playing days, Ritchie seems to be caught in a time-warp.
After all, awareness was not at its peak during the period when Ritchie played his 30 Tests for Australia. The episodes of the English television show, Love Thy Neighbour, were still fresh in the memory, and Ritchie may have enjoyed the reruns shown regularly through to the early nineties, depicting white bullies call black immigrants Nig Nogs and Sambos.

Ritchie says that it is sad that the comment has become an issue. It was just a joke after all, which he
has repeated half a thousand times. “It is to emphasise the fear I had playing against the West Indies. It is a shocking term and it relays the great fear that we all had about facing the West Indies bowling.”

In that regard, one can perhaps excuse him when, as a Channel Nine employee in 1994-95, he was overjoyed when Steve Waugh put that same bowling to sword and scored a double hundred. So delighted was Ritchie that he had run into the field to congratulate Waugh, but the batsman had waved him off with, “What are you doing out here, Fat Cat? On your way.” Yes, Ritchie had put on a lot of weight, and perhaps as a precursor to their feuds with Arjuna Ranatunga, the Aussie players in the middle did not like grossly overweight individuals fraternising with them — a glorious example of equal opportunity abuse at its sublime best.

Kerry Packer, Ritchie’s boss at the time, wasn’t impressed either and reportedly rang him the next day and told him never to do that sort of thing again.

Caught in a time warp

Racial tolerance was not quite ingrained into the system of Ritchie’s contemporary cricketers as well, at least not in teammate Dean Jones who was sacked by Ten Sports in 2006. In a burst of exultation as he watched Hashim Amla take the second catch of the day, and blissfully ignorant that the microphone was on, Jones had exclaimed “the terrorist claims another wicket.”

Ian Botham did not do himself any favours either by calling Pakistan a place where you sent your mother-in-law, all expenses paid. It was perhaps for a reason that Imran Khan called both Allan Lamb and Botham racists – a quote that led to an infamous court case.

Not that the racial vilification has been a one way traffic.

West Indians in their heydays reportedly chirped away from the slips even after Ritchie had long been out of the Test scene. According to the diaries of Ian Healy, as Curtly Ambrose ran in to bowl in 1991, he used to be goaded by his fieldsmen, “C’mon Amby, show them us niggers can play“. And Craig McDermott was branded a white coward by his Caribbean opponents.

But, then, the International Cricket Council (ICC) came out strongly against racial abuse, and cricketers were forced to brand each other cowards or cheats without attaching a colour code. And allegations travelled both ways.

A month after Lehmann was banned for his outburst, Adam Gilchrist reported that Rashid Latif had branded him “white c—t” during the World Cup in South Africa.

The sledging gene was suppressed. Some Australian players allegedly nicknamed Sri Lanka batsman Sanath Jayasuriya “spider monkey” but weren’t bold enough to say it to his face. And obviously when five hundred Indians started shouting “Monkey, monkey” at Andrew Symonds, a serial sledger himself, the Aussies were not really amused.

So, when Harbhajan Singh plunged into the depths of his vernacular, giving vent to his feelings about Symonds with “ma—ki“, Matthew Hayden, Ricky Ponting and the others cried foul and complained to the umpires, more like a bunch of school-kids than a world champion cricket side. As Steve Waugh put it, it would have been better for everyone had Ponting simply had a word with his rival captain, Anil Kumble, instead of starting World War III.

However, Ritchie himself had been far away from the long, and often paralysed, arm of ICC. He had kept himself busy in various ways. In 1997, he was suspended by Nine when he admitted to racially (yet again) abusing an Ansett Airline employee. And around the same time that Jones was targeting some serious accusations towards Amla’s facial hair, Ritchie was first arrested in Los Angeles and later let off with a warning by FBI agents for inebriated disorderliness on another flight from Brisbane.

In 2003, as India prepared to face Australia in Adelaide, Cricket Australia showed admirable sense to avert serious racial repercussions by cancelling Ritchie’s show that was scheduled for the second day; Ritchie was going to perform his act depicting the Punjabi parody figure Mahatma Cote. Using the name of Mahatma might have been fatal for the Indo-Australian relationships, even though admittedly the name Cote can never be found in telephone directories across Amritsar and Ludhiana.

Clearly caught in a time-warp, Ritchie has not yet woken up to the current day and age when, at least officially, where racism has no place in the game or the world. So he merrily goes on with his public speaking acts with puns that can be deemed very offensive in certain quarters, “There’s a place in Pakistan called Lahore. There weren’t many of them [punning on La (w)Hore] around when we were there in 1982, I can tell you.”

He is also quite rash in his descriptions of former icons: “He’s an absolute knob is Imran Khan, that’s the only way to describe him.” That won’t make him the favourite of the Pakistanis either.

Cricket Australia, while not banning him officially, has said that Ritchie will not be welcome at their venues. “We’ve made it clear that his comments were absolutely unacceptable. We’re going to take the opportunity to write to all our states and venues to remind them of the obligations under the ICC anti-racism policy in terms of speakers and what they should be advising speakers at their venues,” a senior spokesperson of CA has voiced.

Perhaps this will be the much required jolt that Ritchie needs to wake up and realise that he is not in the 1980s anymore. 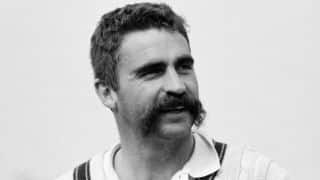