Bumrah's ability to adapt - be it formats or conditions - is his biggest strength, and something he believes will keep him in good stead in Australia.

When Jasprit Bumrah burst onto the scene in the IPL in 2013, he was talked about for his unusual bowling action, with many suggesting that he would be injury-prone. However, Bumrah dispelled doubts about his bowling abilities and fast forward five years, the 24-year-old is an indispensable member of the Indian team in all three formats.

Long considered a limited-overs specialist, Bumrah, with 30 wickets in his first six Tests, has proved his detractors wrong. His ability to adapt – be it formats or conditions – is his biggest strength, and something he believes will keep him in good stead in Australia.

My biggest strength has been to adapt to different conditions and that I think will be the key [in Australia], Bumrah tells CricketCountry.com on the sidelines of a promotional event for ASICS.

While he claimed 14 wickets in the three Tests in England, including a match-winning 5/85 at Nottingham, his bowling action continued to be scrutinised with experts questioning whether Bumrah could sustain himself during long spells. He went on to bowl 133.2 overs in the tour.

The will to keep learning and to keep trying to get better is always important and self-belief, says Bumrah. I always believe that when you play cricket, everybody has their perception and their opinions. But for me what has always worked is my self-belief. What I believe in and not what others believe in; and once of you start believing in yourself, you will be able to tackle any situation.

For Bumrah, irrespective of the kind of action one may have, fast bowling in itself is a difficult job, and fitness is paramount to sustain yourself as a bowler.

It all comes down to fitness. Even if you have a simple action, it takes a lot out of your body, because fast bowling is such a job that requires a lot of hardwork and stamina, he says. So that is been my basic focus.

On improving my fitness and take care of my body. It is always helpful to be at a good level of fitness to bowl long spells.

Playing all three formats, workload management is one of the things that he keeps in mind. Bumrah was rested for the West Indies Tests, alongside Bhuvneshwar Kumar, and such breaks are the key to manage the workload.

Workload management is very important, because nowadays the amount of cricket we play is a lot more than what it used to happen before, he says. So it is always very important to take good amount of rest and to take care of your body. The right amount of training and right amount of bowling – that s has been our focus right now as a team, and we keep at it.

On his association with ASICS, Bumrah said that the brand philosophy of A Sound Mind in a Sound Body and I Move Me was something he connected with. 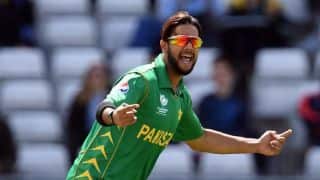