All Verma wanted from BCCI was recognition for Cricket Association of Bihar.

All Aditya Verma wanted from Board of Control for Cricket in India (BCCI) was  recognition for Cricket Association of Bihar (CAB). As his pleas fell on deaf ears, he took legal route to teach these bigwigs a lesson. Chander Shekhar Luthra has more..

Some derisively refer to him as a cricket stooge of politicians. Some others call him a cynic. But as far as Aditya Verma is concerned, this is war — one that he’s waging for the future of Bihar cricket which has been ignored by the BCCI for over a decade now.

Till 2013, Verma did everything he could to get the CAB, of which he’s secretary, recognised by the board. However, nobody in the BCCI paid heed to his pleas. The reason? Vote-bank politics.

For Verma, though, the fight against the BCCI started way back in 2000, soon after Jharkhand was carved out of Bihar. And with the Jharkhand State Cricket Association (JSCA) coming into existence, the “politics” within the BCCI made it forget its “old allies” and swing towards the newly-formed association. “This was strange and unheard of,” said Verma, adding, “Every cricket lover in Bihar wondered how a new state became a member of the BCCI, while the old body, Bihar, was left in the lurch.”

In 2007, the BCCI called the representatives of rival associations of Bihar and Jharkhand to its headquarters to present their case. “They never listened to us seriously during the course of deliberations. The result was soon out with Jharkhand, a new-born baby, getting recognition. Bihar was ignored,” Verma told dna.

This angered Verma and he decided to not leave the future of Bihar cricket in the hands of the BCCI. Till date, Verma has made at least a hundred trips to the BCCI headquarters in Mumbai. But nothing has come of it.

At one point in time, he started exploring other options. “There is a famous saying that ‘everything is fair in love and war’ but I only took the legal way to take on the board,” said Verma, who hails from a small town called Chhapra.

All this while, when Verma was fighting this lone battle, there was one other person, Subodh Kant Sahay, who always kept his doors open. For Verma, the Ranchi MP and Union minister is like an elder brother. In fact, Sahay has been guiding Verma since 2007.

In the meanwhile, Verma got his first big opportunity to grab the BCCI by the neck last year. Soon after the spot-fixing scandal came to light, Verma wasted no time and filed a PIL in the Bombay high court against the BCCI’s two-member internal probe panel.

“This was happening for quite some time. The BCCI was hushing up matters by setting up its own internal panels and getting clean chits,” said Verma. Eventually, his efforts bore fruit when the Supreme Court ousted the all-powerful BCCI president N Srinivasan and raised doubts over two IPL franchises.

The board’s lawyers have been working overtime for the last one year to find ways to counter Verma’s non-stop offensive. From seeking recognition for the Cricket Association of Bihar, Verma has now focused his energies on cleaning up the BCCI.

There are several allegations against Verma. One, that he is stooge of former BCCI and ICC president Sharad Pawar and, that, the Maratha strongman is fighting a “proxy war” through him. But Verma is not bothered. “Pawar sa’ab is a well-wisher of Bihar cricket and that’s why he had written to chief minister Nitish Kumar to consider the CAB’s plea for recognition,” said Verma, adding, “The president of the BCCI must be a person of unimpeachable integrity. That’s not the case with Srinivasan. My aim is to clean up the cricket administration. All cricket lovers of this country are supporting me in my fight against these powerful administrators.”

A few cricketers are on Verma’s side. Surinder Khanna, the former India opener and wicketkeeper, is one of them. “The BCCI has become the Board of Corruption in Cricket in India. Aditya has been fighting a long battle and I hope he succeeds in cleaning up this corrupt system. We need transparency. Whatever happened in the Supreme Court on Tuesday was a big step towards that,” Khanna told dna after the apex court’s decision to form a special investigation team under Justice (retd) Mukul Mudgal. 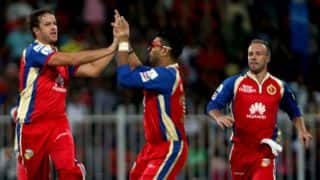