Afghanistan took off to a resounding start in the 3-match series against Bangladesh in Dehradun.

Afghanistan took off to a resounding start in the 3-match series against Bangladesh in Dehradun. They were 86 for 1 at one stage, and banked on that start to go all out in the last 8 overs, when they put on 81. Mohammad Shahzad top-scored with 40, but crucial contributions also came down the order from Samiullah Shenwari and Shafiqullah Shafiq, who scored 60 between them in 26 balls. Bangladesh, never in the hunt, collapsed to 122 against the spin trinity of Rashid Khan, Mohammad Nabi, and Mujeeb Ur Rahman, who had figures of 11-0-54-6 between them. Here are the statistical highlights from the match.

3 Test-playing nations have now lost T20Is to Afghanistan now, Bangladesh being the 3rd. Afghanistan hold a 7-0 head-to-head advantage over Zimbabwe and 1-0 over West Indies. They also have 7-0 against Ireland, but the sides are yet to play each other since Ireland’s maiden Test.

31 matches needed by Rashid to reach the 50-wicket mark in T20Is, the joint 2nd-most. Imran Tahir had also needed 31. However, Mendis (26) leads the list by the proverbial mile.

1/34 best figures for Abu Jayed, in his 2nd match. He had taken 1/45 on debut, against Sri Lanka at Sylhet earlier this year.

3/40 best figures for Shapoor Zadran, in his 33rd match. His previous best was 2/9 against Papua New Guinea at Malahide in the 2015 World T20 Qualifier.

99 grounds have now hosted T20 Internationals, the latest being Rajiv Gandhi International Stadium, Dehradun. Of these, 21 are in India. 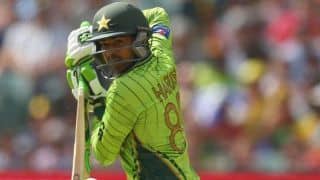 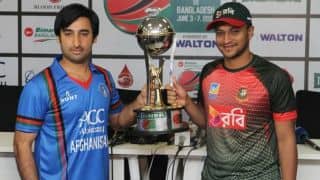