Agarkar continues to suffer from the tag of enigma , despite having superior ODI numbers to Zaheer

Agarkar continues to suffer from the tag of enigma , despite having superior ODI numbers to Zaheer

The Delhi Daredevils trumped the Perth Scorchers in a low-scoring thriller at the Champions League T20 2012. While Virender Sehwag scripted an uncharacteristically sensible knock, it was Ajit Agarkar s all-round effort that was the ultimate difference between the two sides. Ajit Agarkar has picked up 288 wickets for India in 191 One-Day Internationals at an average of 27.85 Getty Images

The Delhi Daredevils trumped the Perth Scorchers in a low-scoring thriller at the Champions League T20 2012. While Virender Sehwag scripted an uncharacteristically sensible knock, it was Ajit Agarkar s all-round effort that was the ultimate difference between the two sides. Since he burst on to the international scene as a promising youngster in 1998, Agarkar has been a bit of an enigma someone whose performances ranged from absolute brilliance to shoddy mediocrity. As a result he was unable to cement his spot in the Indian team; he played with the axe hanging over his head.

Agarkar s bowling has always been suited for One-Day Internationals (ODIs). Although, he did shine in a few Test matches the most memorable being his six-wicket haul at Adelaide during the victory over Australia it was his performances in ODIs that helped him make a mark in the international arena. His ability to surprise the batsmen got him many wickets. Despite a frail frame and a slowish run-up, he could clock serious pace and move the ball. His slightly slingy action also strengthened his wicket-taking abilities.

However, like a Shakespearean hero, Agarkar has a tragic flaw one that has cost him dearly on more than one occasion. His tendency to deliver the one boundary ball every over was frustrating for any captain. On a number of occasions he would bowl four or five good deliveries to put pressure on the batsman only to release it with a bad one to finish the over. As a result, his economy rate took a bit of a stick. The 5.07 rate is expensive considering the fact that he played all his ODIs before T20 cricket took the world by storm in 2007. Since then, such a figure is an acceptable number.

His analysis of 4-0-14-2 against Perth in the Champions League on Sunday is simply brilliant. Not only did he pick up wickets, but also managed to stem the flow of runs. What was impressive was that he maintained a very tight channel around the off-stump. If that wasn t enough, he returned to help his team clinch a needle finish with the bat.

Agarkar s batting would be remembered for the ignominious five consecutive blobs he recorded on the tour to Australia in 1999-2000. However, he has a Test century to his name at Lord s something that Indian greats such as Sachin Tendulkar and VVS Laxman haven t managed. Not just that, he also holds the record for the fastest fifty in ODIs for India in 21 balls, against Zimbabwe. The talent was obvious even then as he is a clean striker of the ball. But, the numbers didn t do justice to his ability.

In the words of captain Mahendra Singh Dhoni, Zaheer Khan is the Sachin Tendulkar of the Indian bowling. For a number of years, he has led the attack and has been a potent wicket-taking force. His contribution at the 2011 World Cup cannot be forgotten as transformed India s bowling fate after a slow start in the tournament. Off late, he has struggled to maintain his high standards and hasn t been at his best.

Although, Agarkar was stereotyped as someone who was expensive, his prolific wicket-taking streak cannot be ignored. A statistical comparison with Zaheer s ODI record would reveal that Agarkar is ahead on many counts.

Zaheer Khan only boasts of a better economy rate, but Agarkar trumps him in the other departments easily. Even in the economy column, there isn t much to choose as Zaheer is only marginally ahead. Agarkar has played fewer games, but has more wickets, boasts of a better strike-rate, average and the number of match-hauls. Despite having better numbers, Agarkar would be considered a lesser bowler when compared to Zaheer. A lot of it may have to do with the way they evolved in Test cricket. While Zaheer went on to become India s trump card in the longer format, Agarkar never managed to carve a long Test career.

During the Greg Chappell era, Agarkar established himself as India s number one bowler in ODIs. He maintained good consistency in the lead-up to the 2007 World Cup and was touted as the leader of the pack even ahead of Zaheer. However, his form slipped during the tour of England later that year and was instantly discarded. Two poor outings at the ICC World T20 2007 also didn t help his cause.

He was finally dropped after a poor run. Would the selectors do the same with Zaheer, who has struggled for quite some time?

When compared to Zaheer, Agarkar is fitter and a much better fielder. He is an asset in the deep as his powerful arms can shoot the ball straight into the keeper s gloves. Not much to choose on the age spectrum as well Agarkar is less than a year elder than Zaheer.

However, Agarkar hasn t had a brilliant track record in domestic cricket after his axing in 2007. During his career, he was dropped a few times, but managed to work his way back. There were no comebacks this time around as the brilliant performance has eluded him. He hit a trough last season when he left the Mumbai camp during a Ranji Trophy encounter as he was dropped from the eleven. Tempers then calmed down and he is now set to captain them in the Ranji Trophy this season.

Agarkar has been impressive at the CLT20 so far and if he can build on that good start during the domestic season his name may start doing the rounds again. But, an international comeback seems to be a distant dream as the Indian selectors don t usually go for a discarded player on the wrong side of 30.

(Nishad Pai Vaidya is a correspondent with CricketCountry and an analyst for the site s YouTube Channel. He shot to fame by spotting a wrong replay during IPL4 which resulted in Sachin Tendulkar’s dismissal. His insights on the game have come in for high praise from cerebral former cricketers. He can be followed on Twitter at http://twitter.com/nishad_44) 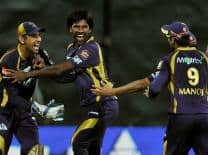 Yuvraj Singh, Martin Crowe and Tony Greig and other cricketers who were afflicted with cancer