Born September 15, 1890, Christie was one of the most popular crime fiction writers of all time

Agatha Christie, born September 15, 1890, was one of the most popular crime fiction writers of all time – almost certainly the most prolific. Arunabha Sengupta writes about the cricketing connections of the creator of Hercule Poirot and Miss Marple.

“Cricket, the English enigma. I know not of any other game where even the players are unsure of the rules,” says Hercule Poirot in Four and Twenty Blackbirds.

In the television episode of Agatha Christie’s Poirot featuring the story, the Belgian detective explains the mysteries of left arm spin to a puzzled Hastings after the newspapers bring forth the news that Hedley Verity has routed the Australians with 15 wickets on a rain affected Lord’s pitch.

The only gaffe there is that Poirot says, with characteristic vehemence, that Verity possessed a chinaman. The producers were way off the target – not only did Verity never veer from his orthodox finger spin, neither did Christie herself ever emulate the lesser of her contemporary crime fiction writers to project a china man as the mysterious villain.

Dorothy L Sayers featured cricket majorly in one of her Peter Wimsey novels – Murder must Advertise.Christie never did the same. However, the relationship of the queen of crime fiction with cricket ran much deeper.

She enjoyed the game throughout her life. She inherited this passion from her father, Frederick. A keen member of the Torquay Cricket Club, Frederick Alvah Miller was the official scorer and often turned out for the side. As a child, young Agatha accompanied her father every Saturday morning during the cricket season to watch him play or just sit at the table and score the matches.

We know that Nottinghamshire batsman George Parr became a legend by hitting sixes out of the ground in the mid-nineteenth century. A tree just beyond the boundary in the Trent Bridge cricket ground was bombarded with so many of his hits that it became known as Parr’s Tree. Strangely, there is a similar cricketing tree by the name of Agatha Christie’s Oak.  The Barton Cricket Club in Torquay, Devon, in the English Riviera, often saw Christie’s father playing the game and young Agatha watching the action from the shade of the oak. The tree has been christened after her, and still stands in the ground.

Even half a century after the forays to the ground clasping the hand of her father, Christie remained a keen enthusiast. Weekend guests in Greenway would always be invited to participate in family games of cricket on a homemade pitch. By then she was past middle age and thickset in her build, but she was not averse from taking part herself. It should not come as a surprise. Christie used to swim till her old age, and as a young woman she was one of the first British surfers. Sport was not a mystery to her.

When her grandson Mathew was chosen to lead the Eton First XI at Lord’s, the author declared it to be one of the happiest days of her life. She ensured that her love for cricket extended after her Appointment with Death, even After the Funeral. The funds for the tours of the England Young Cricketers Club to the West Indies were not procured through some Caribbean Mystery – it was financed by Agatha Christie Ltd according to the provisions made by the writer in her will. 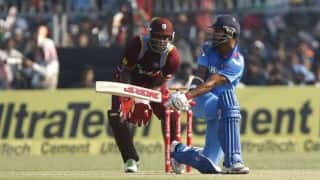