Tarot reader Shruti Chopra looks into her cards to give CricketCountry.com readers exclusive insights into what lies ahead in the IPL matches. In the below piece, she dwells into the Royal Challengers Bangalore vs Mumbai Indians game - the first of the two IPL matches on Monday. 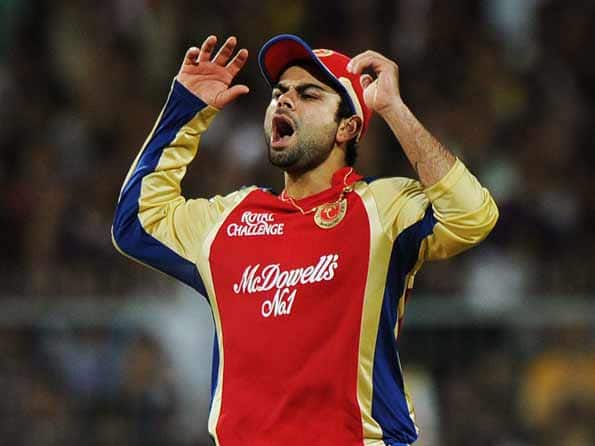 Virat Kohli, as a captain, will be willing to experiment and take risks, which might put Royal Challengers Bangalore in an advantageous position © AFP

Tarot reader Shruti Chopra looks into her cards to give CricketCountry.com readers exclusive insights into what lies ahead in the IPL matches. In the below piece, she dwells into the Royal Challengers Bangalore vs Mumbai Indians game – the first of the two IPL matches on Monday.

The Royal Challengers will have a slow start, but like the Sun they will carry a positive and balanced energy throughout the game. The Temperance is representing intelligent and well thought out plans from the team management. Their input will provide the right guidance for the team. Hard work and application from the Eight of Pentacles will pave the way for success, as aggression won’t be the only key to get them there.

Virat Kohli will have a steady start and like the Six of Swords, he will look to steer the team through his batting. As a captain, he will be willing to experiment and take risks, which like the Seven of Wands will put them in an advantageous position. He will enjoy a stable day with his batting and captaincy.

Chris Gayle will start off looking strong and authoritative, but with the Nine of Wands, he will begin to look edgy. It will be important for him to push himself if he is to see himself through this phase.

Tillakaratne Dilshan will have a great start. In fact, he will direct the innings with surety. His wise batting display will bring with it a good day for him.

AB de Villiers will be like the Ten of Wands – feeling the burden of responsibility. Luckily, he has the ability to take it in his stride and like the Magician, he will be able to direct the situation.

Zaheer Khan will be presented with a good opportunity to have successful spells, but he should be wary of getting caught up with trying too much.

Harshal Patel will look to take constant advice and will be well directed. He will be miserly and will have a good day with the ball.

Muttiah Muralitharan will be like the High Priestess – bringing out his best and being deceptive with his bowling.

Vinay Kumar will start off quite promising, but will lose way as the Tower plaques his mindset.

The Mumbai Indians will have their share of problems to deal with, but with the Death card, they will be able to change this. They will look to end their streak of inconsistency and grab onto this opportunity. They will be like the Chariot, aggressive and forthright in their approach – it is this ability that allows them to strongly fight the opposition. They will be able to present the positive aspects of their team with confidence.

Harbhajan Singh will have a good day with the ball. He will work hard, be miserly in giving away runs and with the Wheel of Fortune, he will bring successes. As a captain, he will work to steer the team in the right direction and look to motivate the team through tough situations. It will be hard work.

Sachin Tendulkar will start off his batting strongly. And like the Strength card, he will look to be in control. He should be wary of not getting trapped in a slow strike rate during the middle of his innings.

Ambati Rayudu will look to use his attacking abilities to his advantage. He will play an intelligent game and like the Magician, he will be able to manipulate his batting well.

Kieron Pollard will be strong, balanced, attacking and be part of a good partnership. His bowling will be steady and beneficial.

Dwayne Smith will pull through all his resources to give it his all. He will be flexible with his game plan.

Munaf Patel may not be the most economical throughout, but he will give the team important wickets and will prove to be an important player.

Lasith Malinga will be adaptable and attacking. He will need to be conscious of not losing direction occasionally.