Ahmed Shehzad-Tillakaratne Dilshan incident: How serious is the issue?

Ahmed Shehzad-Tillakaratne Dilshan incident: How serious is the issue?

Shehzad seems to be an expressive individual who does not hold back his thoughts.

Ahmed Shehzad allegedly made a religious remark to Tillakaratne Dilshan during the recent One-Day International (ODI) between Sri Lanka and Pakistan. If those allegations are true, Shehzad could find himself in hot water. However, why has this alleged incident surfaced five days after it is said to have taken place? Nishad Pai Vaidya write about the controversy.

Ahmed Shehzad seems to be an expressive individual who does not hold back his thoughts. There is that brashness of youth in his demeanour that also spills into his aggressive approach to the game. Earlier this year, during the ICC World T20 2014, he quite sarcastically dedicated his ton against Bangladesh to critics who had seemingly “said things about him”. Yes, the young man was basking in his new found glory, but he prematurely put his foot in the mouth. In the next game, he was dismissed first ball when Krishmar Santokie trapped him in front with a yorker. Cricket is a great leveller after all!

While Shehzad’s comments during the World T20 can be brushed aside as a small indiscretion of youth, the recent allegations are serious. During the recent One-Day International (ODI) between Sri Lanka and Pakistan, Shehzad allegedly told Tillakaratne Dilshan, “If you are a non-Muslim and you turn Muslim, no matter whatever you do in your life, straight to heaven.” It is to be noted that Dilshan was a Muslim (he was called Tuwan Mohammed Dilshan) before converting to Buddhism and changing his name to Tillakaratne Mudiyanselage Dilshan. The Associated Press has reported that the incident is under investigation.

Sledging or taking a dig at players is one thing; it is an oft accepted tactic to disturb the rhythm of the opposition. Only when tempers flare, do such skirmishes get ugly. One may recall the Ramnaresh Sarwan-Glenn McGrath incident, where things had certainly got out of hand there as the players did cross the line. Shehzad’s alleged comments could be a lot more serious than any of the other incidents we have seen in the past. Targeting someone on his or her religion or race is a serious offence. If the allegations are true, Shehzad could well be in trouble.

Having said that, what is surprising is that although the incident took place a good five days ago, it has only come to light recently. Though there is a video footage of Shehzad seemingly making that remark, it has gone almost unnoticed until Wednesday. In this era, where the social media is ever powerful and videos surface on YouTube in no time, how did this get away for so long?

Thus, we must also brace for the possibility of those comments being taken out of context. For days, there was no word or even a whisper about it in the media. All of a sudden it comes up with the series dead and buried. Also, there was no reported complain from Dilshan, who is said to be at the receiving end. He was the one against whom the offensive remark was allegedly made. Despite that there does not seem to be any anger or displeasure in his body language as he walked alongside Shehzad. Was it a “personal chat” as the Pakistan team manager claims? If it is, does it come under the ambit of investigation? There seem to be a few unanswered questions. 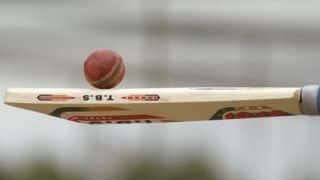