In a last-minute change of mind, Raman Sharma decided to change its course and adjusted his hat.

A bizarre display of incompetence from umpire Raman Sharma saved Ajay Jadeja from getting out on December 28, 1997 at Margao. Abhishek Mukherjee looks at one of the most atrocious umpiring decisions in the history of international cricket.

Poor umpiring, whether a by-product of bias or incompetence, has always been a part of the sport. However, on a December day when sultry Margao had greeted international cricket in carnival mood, Raman Chand Sharma, a man who had already officiated in a Test and 10 ODIs, marred proceedings by reducing himself to laughing-stock in front of millions of viewers thanks to live satellite television.

India had won the first ODI at Guwahati by 7 wickets thanks to Robin Singh’s 5-wicket haul and Sachin Tendulkar’s dominant 86-ball 82 not out. The second match, held at Indore, was abandoned after 3 overs due to an underprepared pitch, leaving the spectators to be satisfied with an exhibition match where only spinners were allowed to bowl.

It all depended on the last ODI: India needed a win (or a tie; or another abandoned match) to clinch the Pepsi Series; Arjuna Ranatunga’s men needed a win. Tendulkar won the toss on what seemed like a flat track and batted. Sharma had not officiated in an international match since October 1996, while K Hariharan, the man at the other end, was making his international debut.

Ajay Jadeja and Sourav Ganguly got India off to a solid start against the two Sri Lankan left-arm seamers. Umpire Sharma soon gave an indication of what was to follow by miscounting the number of balls (he counted 7) in the 10th over of the innings, bowled by Sajeewa de Silva — but that was nothing compared to what he did to Chaminda Vaas at the other end.

Vaas bowled one that moved away a bit from Jadeja. Jadeja came ahead a few steps, was sucked into a drive (as have many against the wiles of Vaas); the edge was clear, as was the deflection, though Jadeja’s expression was unfathomable; Romesh Kaluwitharana accepted the chance gleefully, and appealed.

Blatant edges have been turned down before and after the dismissal. Had Sharma turned down the dismissal straight away it would not have looked ridiculous: it would merely have gone down as another case of incompetence by a match official. What Sharma did has been matched by few.

Up went Sharma’s right finger; for a second, maybe less, it seemed that Jadeja would have to walk back; the finger continued to go up before, in a last-minute change of mind, Sharma decided to change its course and — adjusted his hat. Jadeja, who had almost started a walk towards a dressing-room, had no option but to look down at the pitch and fiddle with his gloves.

The gesture was not terrible, and neither did it infuriate the Sri Lankans. Elmo Rodrigopulle wrote on ESPNCricinfo: “Coming to the umpiring fiasco we are sure all those on the ground and the millions watching on TV would have laughed their sides out at the comedy that was enacted by one of the umpires…The Sri Lankans were simply flabbergasted. This type of village green umpiring has rarely been witnessed before and it was a mockery on the umpiring fraternity and what umpiring stands for.”

Even Ranatunga, never one to stop from reacting to unfair umpiring decisions (it had been only two years since the 1995-96 Boxing Day Test at MCG), was caught grinning, almost laughing, on the television at the absurdness of the incident. “Every time that incident was replayed cricket fans were laughing their sides out,” wrote Rodrigopulle.

Jadeja eventually fell for a 108-ball 53 (India were 97 without loss after the 25th over, so the Sri Lankans were probably not too upset by Sharma’s antics) while Ganguly top-scored with 61 from 86. Mohammad Azharuddin did not get going. Tendulkar failed. Sent at No. 5 for some inexplicable reason, Navjot Sidhu struggled. Barring the openers nobody reached 25, and India finished on 228 for 6.

Sanath Jayasuriya seemed like he meant business that day, but his 8-ball 17 was brought to a premature end by Debasis Mohanty. Aravinda de Silva entered at 51 for 2 in 12 overs, and got involved in partnerships of 61 for the third wicket with Roshan Mahanama, 52 for the fourth wicket with Ranatunga, and 56 for the fifth wicket with Kaluwitharana.

At the other end, Hariharan was hell-bent on matching Sharma’s antics. He had already been matching Sharma with wild, inconsistent calls of wides, but he went a notch ahead when Aravinda got going. Prem Panicker wrote on Rediff: “Sharma’s colleague-in-arms, K Hariharan, struck when Lanka were batting. This time, Sairaj Bahutule got one to turn from outside leg to middle, Aravinda de Silva, with the score on 120/3, slashed, under-edged and was held by the ’keeper. The nick was clear, the sound audible — to all but Mr Hariharan, who ruled the other way.”

Sharma, however, had decided to stamp his authority on the match by going one-up before it was over. With the tourists closing in on to victory there was an appeal for a run out against Kaluwitharana. Sharma turned down the appeal, but suddenly, to the surprise of everyone, suddenly called for the opinion of the third umpire R Nagarajan. Kaluwitharana was well inside. Sunil Gavaskar, commentating on the television, jokingly mentioned that Sharma was fair in his calls: he was at least consistent when it came to changing his mind.

Aravinda eventually saw Sri Lanka home with an unbeaten 90-ball 82. Ironically, his partner at the crease when the winning runs were scored was Kumar Dharmasena, later an international umpire himself.

Raman Sharma never officiated in another international match. He passed away in an accident a year later. Hariharan had a longer career that spanned 2 Tests and 34 ODIs.

(Abhishek Mukherjee is the Deputy Editor and Cricket Historian at CricketCountry. He blogshere and can be followed on Twitter here.) 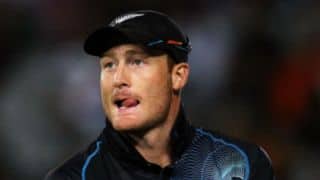