Nine batsmen from India before Rahane scored 50 runs or more in their maiden Test innings.

Ajinkya Rahane scored a fine century to take India out of troubles in the first innings of the second Test of the series at Lord s against England. He scored 103 batting at No 5 when at one point India was seven down for 145. This is Rahane s first match at Lord s and he got his century in his very first innings at this venue.

Rahane became only the second Indian batsman to score a century in his maiden Test innings at Lord s. He emulated Sourav Ganguly, who had scored 131 runs in his debut Test innings at Lord s. Overall, he is the 34th batsman from the visiting teams to achieve the feat. The first batsman to reach this feat was Henry Graham in 1893 when he scored 107 runs at no. 7. Angelo Mathews was the last one to have achieved this feat before Rahane.

Below is the table listing all the visiting batsmen who scored a century in their maiden Test innings at Lord s:

– Among the 34 players above, 14 are from Australia, five each from Sri Lanka, South Africa and West Indies, three from New Zealand and two from India.

– Don Bradman (254 in 1930) and Graeme Smith (259 in 2003) are the only players to score double centuries in their maiden Test innings at Lord s. Incidentally, these are the top two individual scores by visiting batsmen at Lord s.

– The pairs of Kim Hughes and Graeme Wood (1980), Desmond Haynes and Viv Richards (1980), Sidath Wettimuny and Duleep Mendis (1984), and Marvan Atapattu and Mahela Jayawardene (2002) achieved the feat in the same innings.

Below is the table listing the Indian batsmen who scored 50+ in their maiden Test innings at Lord s: 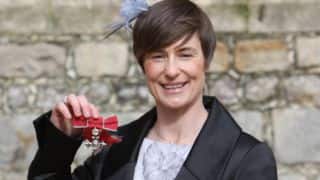