Scoring quickly at the top is vital in ODIs, something Rahane and Dhawan have done well.

Ajinkya Rahane and Shikhar Dhawan have combined well recently for India in the opening position. India are in dire need of a settled opening combination before the ICC World Cup 2015. Their 231-run partnership was instrumental in India beating Sri Lanka in the first ODI at Cuttack. Indrajit Dutta looks at whether they should continue or not.

Shikhar Dhawan and Ajinkya Rahane — India’s newest opening pair in One-Day Internationals (ODIs) — has begun to bear fruit. They have provided evidence that they can dominate attacks. Their 231-run partnership on Sunday in the first game against Sri Lanka point to that.

Scoring quickly at the top is essential in ODIs, and the newly-formed pair of Rahane and Dhawan have done that well. Rahane, in fact, had made his debut as an opener during India’s tour of England in the ODI series in 2011. On that occasion he did not fare too well as Steven Finn repeatedly bounced him out after sledging him.

On India’s tour of England in 2014, when Rahane was provided with the opportunity to open again, he showed himself to be mentally tougher. The hundred in the Lord’s Test showed he had applied himself and churned out a determined knock. Thereafter he fell away as did the rest of the team. In the ODI series, however, he regained form and came good.

He was dominant during the 106 that he made in the fourth ODI against England. He even outscored than the belligerent Shikhar Dhawan. On Sunday, once again, he tore apart the Sri Lankan bowling apart.

Dhawan’s return to form augurs well for India. His 187 on Test debut had once showed that India have unearthed another batsman in the same mould of Virender Sehwag. It is still early to compare him to Sehwag, but with Sehwag unlikely to find his way back into the squad it is good to have somebody equally aggressive. His unbeaten 97 showed that he needed only one knock to prove he had retained his natural aggression.

Rohit Sharma had hammered 142 off 113 balls In the tour match for India A on Thursday. On this day in 2013 Sharma had showed if he gets going he can destructive with the capital D. This was evident as he made 209 in the seventh ODI versus Australia. To make a double-hundred in a limited overs international takes some doing.

Rohit, however, has not lived up to his talent, and was exposed in South Africa last season. The ICC World Cup 2015 will be played in Australia and New Zealand, where the wickets will no doubt have something for the bowlers. Taking this account it may be a good idea for Rohit to come lower down. Furthermore the Indian batting line up has shown itself to be frail and prone to collapses. In New Zealand and South Africa they failed to win a single ODI.

The batting will require solidity, and can do with more depth lower down the order. Therefore it will be a good idea for Rohit to bat in the middle-order. With MS Dhoni and Ravindra Jadeja to support him, Rohit may be able to lead a formidable lower middle-order.

As of now Rahane and Dhawan should remain at the top while Rohit should add more strength to the middle order. Rahane’s blend of solidity and aggression will be essential, while Dhawan is aggression personified. The combination bodes well for India. 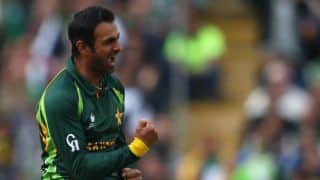 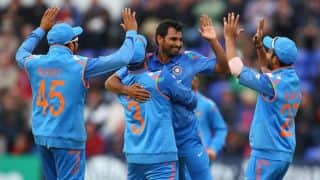