Ajinkya Rahane has scored 339 runs in eight innings so far in the India Premier League (IPL) 2015 and holds the Orange Cap as the top run scorer in the tournament till date.

Ajinkya Rahane has scored 339 runs in eight innings so far in the India Premier League (IPL) 2015 and holds the Orange Cap as the top run scorer in the tournament till date. Suraj Choudhari traces his evolution as a batsman who’s all set to fit in the big shoes for Rahul Dravid in the longer formats and has evolved as the most consistent batsman in shorter format.

Ajinkya Rahane is not an aggressive batsman; his game is built around the virtues of good technique, patience at the crease and timing the ball. He is serene, solid and elegant as a batsman, giving rise to hopes that he will be the next Rahul Dravid. Rahane has transformed into a complete and versatile batsman who can bat at any position and in any format regardless of the situation. He has grown in caliber as India’s most consistent, steady and reliable batsman overseas and at home. Rahane is also a livewire in the field.

Rahane first played for India in the shortest format, making his Twenty20 International debut against England in 2011, where he went all guns blazing and scored 61 of 39 deliveries and dominated the English attack. This was the turning point for Rahane in T20 cricket.

Rahane first featured for Mumbai Indians (MI) in first three seasons of IPL, where he didn’t get enough opportunities to showcase his talent. Rajasthan Royals picked him in the 2011 IPL edition. Questions were raised on Rahane’s selection, but he played the entire season with unmatched confidence to evolve as the highest run-scorer for RR in the 2012 season.  But his performance was overshadowed by Chris Gayle, who walked away with the Orange Cap. Under mentoring of Rahul Dravid, Rahane’s career bloomed. Since his induction into the RR, Rahane has been one of the most consistent run-scorer for them and bailed them out on many occasions.

Rahane has scored three career-defining Test centuries in New Zealand, England and Australia. A hundred at the Mecca of cricket, Lords is always rated highly and Rahane did exactly the same to encrypt his name in cricketing history. During the second Test of India’s tour to England in 2014, Rahane was the lone warrior for India on a doctored pitch which favoured the bowlers. He confronted the English bowlers with immense confidence and went on to score a tenacious century while all the wickets kept tumbling from the other end. He was the second Indian to score a century in his maiden Test innings at Lord’s, eventually this innings proved crucial as India went on to win the Test and this win was the only glory for them in the Test series.

During the last Boxing Day Test in Melbourne, Rahane played magnificently with Virat Kohli during an epic 262-run partnership for the fourth wicket. Rahane’s 147 run blow came of just 171 deliveries. He also played quite a contrasting innings in the fourth Test of the same tour at Sydney, showing immense patience and great temperament which helped India save the match with an unbeaten knock of 38. He also has a century to his name in New Zealand, where he scored 118. He played some brilliant knocks against South Africa in too.

In 14 Tests he averages 44.87, whereas in One Day-International (ODI) he averages just over thirty with a healthy strike rate of 77.30. Although he started his ODI career on a stagnant note and was too flashy but his class was too tough to ignore. He is a versatile batsman, who can bat with ease at any position. He also has two ODI centuries to his name. His performance in the longer formats is a testimony of his self belief and an indication that he is all set to step into the shoes of Dravid.  In T20 cricket, Rahane averages just under 30 with a strike rate of over 116.

In the ongoing IPL tournament, Rahane has already made an impact by donning the Orange Cap. He hardly hits the ball, power is not his forte but timing and placement is. Rahane is an illustration to the fact that T20 is not just a power hitting game. Over the years he has developed immense temperament and persistence and is all set to anchor India in longer formats. 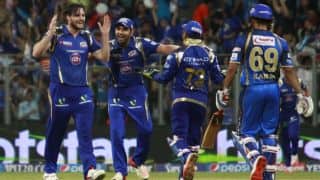